For espoused systems thinkers who are predisposed towards towards finding an equilibrium (or maybe one amongst multiple equilibria), a discussion about entropy can raise discomfort.  In the systems sciences, the second law of thermodynamics — as an entropic process — is often cited by the learned as a universal law applicable across physics, chemistry, biology … as well as social systems.

In economics, Nicholas Georgescu-Roegen drew attention to the inconvenience that “perpetual motion of the third kind is impossible“.  Thus, “a closed system that does work forever at a steady rate” violates the second law of thermodynamics.  Towards unpacking the implications of this universal law, we drew on David L. Hawk for expertise.

Developing and appreciation for entropy — let alone the controversies within correct scientific use of the second law of thermodynamics — is challenging, at best.  If we really wanted to get serious about understand living systems, we might look into the thermodynamics and ecology writings of James Kay, or read Eric D. Schneider and Dorion Sagan (2005) Into the Cool: Energy Flow, Thermodynamics, and Life.

Whenever I get into a discussion about entropy, it’s a toss-up whether I’m become less confused after the conversation, or more confused.  Participants in this session may have found the same issue.

Entropy, the second law of thermodynamics, is foundational to the systems sciences. Since the field aims for isomorphies (i.e. patterns that apply across many discipilines), a variety of interpretations of entropy can create a lot of confusion!

“Entropy, something I had no idea about when first told, then began to understand it on second encounter, then knew I would never understand it when I met it the third time. Then, not being able to ever get over it on fourth encounter.” [….]

“For Einstein, then Steven Hawking, the 2nd Law of Thermodynamics was sacrosanct. [….] Many leading scientists have gone deeper in arguing why they agree with Einstein, then Hawking, and feel so strongly about entropy is a supreme law of nature and must be factored into what humans do.”

With this caution, David Hawk has agreed to guide us towards some understanding of entropy, and how it shapes (or misshapes!) the human condition.

The pre-reading list, below, has been annotated, to encourage participants to gain some familiarity in advance of the interactive discussion. 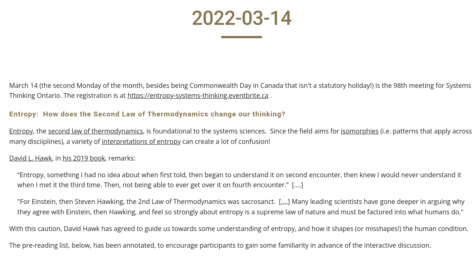