The IBM Institute for Business Value has released a report titled “The end of advertising as we know it”. I was especially intrigued by a chart where age groups were broken out. One read of the chart says that more than 40% of the over-35 age-group watches cable tv, while more than 50% of the under-34 age group is on social networking sites (e.g. Facebook or Myspace). 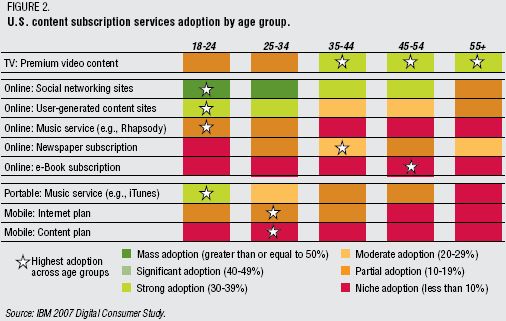 As if there’s natural experiment at work, the study page has an additional link to an “Internet vs. TV street interview video”. If you’re really interested, you can easily follow the link. Alternatively, you’ll have to wait for the news channels to pick it up!

The report has messages for advertisers, specifically with four drivers:

I can readily confirm that my four sons (all under age 21) don’t watch the television. I do catch them watching their computer monitors, though, having downloaded movies and/or television programs over the Internet. When I pointed out that I actually own on the DVDs (i.e. The Corporation) that Adam was watching, he said that it was just as easy to download a copy over our high-speed Internet connection.

For those young people reading newspapers, or the more mature who are blogging … perhaps a study of mental age might be appropriate.