This morning, I had a low stress commute through rush hour Toronto traffic. I programmed my GPS navigator, and then mostly decided against its recommendations. My commute time yesterday was about 75 minutes, following the GPS recommendations. Today, the drive was about 60 minutes, using the GPS as a lookahead map of unfamiliar streets, including a serendipitous circumnavigation of a park that I hadn’t previously known.

Negotiating order is a way of governing where one or more parties engage with the environment to coordinate action. An alternative way of governing is social contracting towards legal order (or rules-based order), where parties delegate the directions and constraints of social activity to some (higher) authority, and accede to conditions then pre-established.

Self-organizing is another way of describing negotiating order. A contractualist perspective sees parties engaging in mutual benefit schemes, towards achieving some outcomes that they can not achieve on their own.

The congestion of rush hour traffic is a familiar experience for people in cities. Toronto has a record with the highest Commuter Pain Index in the world. How does a GPS (or possibility one of the future autonomous car) impact the decision on routes for a long commute? 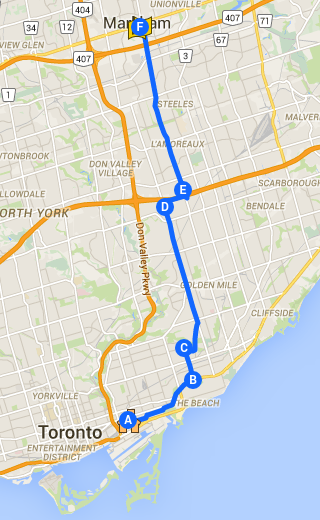 The conventional path from downtown Toronto to Markham is north and then east. An alternative path through arterial city streets is east and then north.

The conventional path is a highway typically clear for the first 10 minutes, placing the driver into a congestion trap. When the driver gets sufficiently frustrated, he or she will attempt a diversion to an alternative road off the limited access highway. Unfortunately, that diversion may also be selected by other drivers, so the pain gets distributed not only to people on the main highway, but also onto all of the nearby arterial roads.

An alternative path, when navigating (mostly) a grid of arterial roads, aims to stay away from the highways, and to route though traffic lights and stop signs. In Toronto, the grid of roads is supplemented by a few diagonal paths, as some roads follow the landscape where Lake Ontario and the rivers were already in place before the roads were paved. Today, upon encountering a construction zone, and then an streetcar breakdown, I had the freedom to move away from the obstacles. The GPS enabled me to see more than a few blocks ahead, so I was able to anticipate and avoid dead ends in unfamiliar territory.

A future in autonomous cars leads to a question as to whether computer programming can (i) only solve a problem in congestion for vehicles with that capability, and/or (ii) dissolve a problem for all drivers, whether they do or not use electronic navigation devices. Russell Ackoff originally published on these distinctions:

By a problem we mean a situation that satisfies three conditions: First, a decision-making individual or group has alternative courses of action available; second, the choice made can have a significant effect; and third, the decision maker has some doubt as to which alternative should be selected. There are three kinds of thing that can be done about problems — they can be resolved. solved. or dissolved.

To resolve a problem is to select a course of action that yields an outcome that is good enough, that satisfices (satisfies and suffices). We call this approach clinical because it relies heavily on past experience and current trial and error for its inputs. It is qualitatively, not quantitatively, oriented; it is rooted deeply in common sense, and it makes extensive use of subjective judgments. Clinicians do, of course, use research, even quantitative research. but they seldom use it exclusively or allow it to play a decisive role. They incorporate its outputs into the pool of judgment that is dominated by qualitative experience. The research they carry out or use tends to be based on surveys of opinions. attitudes, or characteristics of people. Tests, questionnaires, and interviews are the principal instruments used.

Most managers are problem resolvers. They defend their approach to problems by citing the lack of information and time required to do anything else. Clinicians also argue that real problems are so messy as to render alternative approaches either inapplicable or inappropriate. Furthermore, they claim their approach minimizes risk and therefore maximizes the likelihood of survival.

To solve a problem is to select a course of action that is believed to yield the best possible outcome. that optimizes. We call this the research approach because it is largely based on scientific methods. techniques. and tools. lt makes extensive use of mathematical models and real or simulated experimentation: therefore. it relies heavily on observation and measurement and aspires to complete objectivity [Ackoff. I979]. The research approach is used mostly by Management Scientists and technologically oriented managers whose organizational objective tends to be tririval rather than mere survival: they are growth seekers.

To dissolve a problem is to change the nature, and/or the environment, of the entity in which it is embedded so as to remove the problem. Problem dissolvers idealize rather than satisfice or optimize because their objective is to change the system involved or its environment in such a way as to bring it closer to an ultimately desired state. one in which the problem cannot or does not arise. We call this the design approach. The designer makes use of the methods, techniques, and tools of both the clinician and researcher. and much more; but he uses them synthetically rather than analytically. He tries to dissolve problems by changing the characteristics of the larger system containing the problem. He looks for dissolutions in the containing whole rather than solutions in the contained parts.

The design approach is used by that minority of managers and management scientists whose principal organizational objective is development rather than growth or survival. and who know the difference. To develop is to increase one’s ability and desire to improve one’s own quality of life and that of others. Development and growth are not the same thing and are not even necessarily related. Either can take place without the other; a trash heap can grow without developing, and a person can develop without growing.  [Ackoff 1981, pp. 20-21]

[Footnote by David Ing:  While I have some quibbles with Russ’ idealized design approach, he’s clear, and it’s better to do the right thing wrong, as long as we learn.  This is not a case of doing the wrong thing righter!]

Navigating with a GPS has become an everyday way of routing for many drivers. As human beings, we have the choice of reflecting on the recommendations given by an electronic device as one source of information, or mindlessly following the directions given to us. The new cognitive assistants are increasingly context-aware, and go beyond the 20th century idea of artificial intelligence based on rule-based systems that led to AI winter. The pattern of emergent outcomes and consequences as human beings add higher variety into the system is yet to be seen.

There was one benefit to driving mindlessly, yesterday.  I was able to listen to entire download of “The Motorcycle is Yourself“, with 2015 reflections on an interview of Robert Pirsig on Zen and the Art of Motorcycle Maintenance, conducted 40 years earlier.  I was negotiating order with the time in the car, by bringing my preferred content, rather than listening to the radio content programmed by broadcasters and advertisers.