On my last visit to Finland, I again had lunch with Ville Saarikoski. Ville is ahead of me in pursuing graduate studies, and recently defended his dissertation on “The Odyssey of the Mobile Internet” at the University of Oulu last December. His central thesis is that the success of SMS text messaging has retarded Internet growth on mobile devices in Europe, in contrast to the rapid adoption of the mobile Internet in Japan. Ville was interviewed about this idea by Howard Rheingold in The Feature in 2005 , and published an article in the Financial Times in 2004. 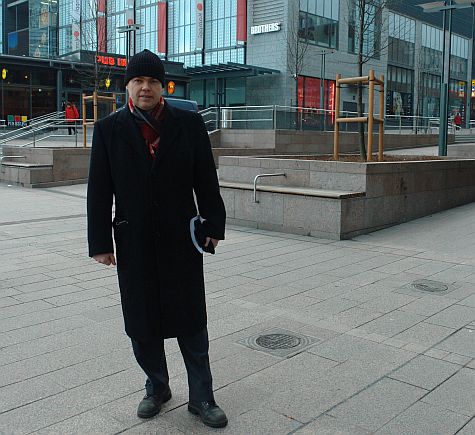 In this Internet age, Ville’s dissertation is easily accessible as a download from TIEKE, so I had quickly read through a large part of it before we had lunch. (I didn’t make it all the way through all of the seven(!) lenses through which he analyzed his data). At home, I’ve had an opportunity to review his work at greater leisure.

My thinking of organizations has been deeply influenced by the research into communities of practice, with Etienne Wenger as a central source. One key phrase from him is the subtitle to an earlier book: “legitimate peripheral participation”. This position means that the subject of interest is at the periphery, rather than at the core of the social organization. At the same time, the participant must have gathered (or be in the process of gathering) sufficient reputation and/or influence to be legitimate, i.e. accepted as a part of the group.

Thus, I was intrigued by a section in Ville’s work, “7.1.2 Finland a peripheral culture” citing William R. Copeland:

Today … technology has been able, to a significant degree, to overcome distance and time. Change represents one of the great challenges to modern man because it telescopes geographic distance and shrinks time. Peripheral peoples are increasingly drawn into the Global village.

The survival of Finland and the Finnish culture is also remarkable…. Ideas and winds of change had to generate great momentum to penetrate the world of the Finns… Periphery is, in any case, a key factor to understanding the culture of a people.

When the Finns are asked to describe their national character, they often suggest that they are by nature a rather skeptical people. They contend that they are skeptical about new ideas and unfamiliar ways generally and about influences coming from abroad in particular. [….]

Many Finnish thinkers today maintain that the Finns must learn to overcome the tradition of self imposed isolation and inward orientation. Finns must learn to become more responsive and forthcoming to new ideas, new ways of doing things. Behind this observation â€“ insistence â€“ lays the realisation that it has traditionally been hard to sell a new idea to the Finns, especially if it originated from the East.1

In the late 1990s, the success of the Finnish mobile telephony industry moved the nation from being a peripheral player to being a leader. A decade later, however, the Finns are under severe competitor pressure. Instead of learning about innovation from core players such as Americans, Ville suggests that Finns need to look to peripheral players in Asia:

Creating a sÏ…ccessful mobile internet entails learning from the East, learning from Japan. A barrier to learning from the East is clearly described in the above insert taken from Dr Copelandâ€™s essay. Japan is also a formidable, very different and to some extent isolated culture … which unlike the Finns has shown remarkable capability to learn from outside cultures and adapt the outside into their own culture.2

Japan became a world economic leader in the 1970s and, since then, has dealt with both boom and bust. Although the Japanese now have an identity as a major world economic player, they still maintain a unique â€” and peripheral â€” social style.

Strategy at the core of a business can be contrasted with that at the periphery. In case studies, Patrick RegnÃ©r found:

… a twofold character of strategy creation, including fundamental different strategy activities in the periphery and centre, reflecting diverse location and social embeddedness. Strategy making in the periphery was inductive, including externally oriented and exploratory strategy activities like trial and error, informal noticing, experiments and the use of heuristics. In contrast, strategy making in the centre was more deductive involving an industry and exploitation focus, and activities like planning, analysis, formal intelligence and the use of standard routines.3

In Finland, exploiting SMS text messaging is a deductive strategy, exploiting historical successes. Opening up to Internet standards such as e-mail interoperability represents a peripheral strategy.

In the conversation with Ville, we discussed differing approaches to business models around the world. In Europe, the originator of the call pays for the session, whereas in North America, both the originator and recipient pay. In Finland, SMS and e-mail are two distinct worlds. In Canada, anyone with a Internet web browser can send a message that will be received as SMS text by a Bell Mobility subscriber, or by a Rogers Wireless subscriber. The recipient of the message may be charged a small fee for the service, although most customers are likely to get “free” text messages bundled into a larger service package. While it may seem as though the carrier “loses” the revenue from the the originator of a text message, it still gets a cut from the recipient.

In Europe, billing for text messages might seem to be a non-starter. Reading the fine print in Canada a little closer, however, reveals that receiving messages are not always “free”. If messages originate from a service susbscription (e.g. news flashes), they’re chargeable.

For most people in the world, Internet services aren’t “free”. It all depends on how they’re packaged by local providers. Maybe a few European telecom providers need to be convinced to step out from the norm of the core game, and go out to the edge … onto the periphery.

1 William R. Copeland, “Who are the Finns? An essay on a Peripheral People”, Material for course 91.200 Technical University of Finland [citation embedded in Saarikoski (2006)]2 Ville Saarikoski, The Odyssey of the Mobile Internet: The emergence of a networking attribute in a multidisciplinary study, Taloustielo Oy, 2006.3 Patrick RegnÃ©r, “Strategy Creation in the Periphery: Inductive Versus Deductive Strategy Making”, Journal of Management Studies, Volume 4, Number 1 (2003), pp. 57-82.