Mike Moldoveanu is director of the Desautels Centre for Integrative Thinking 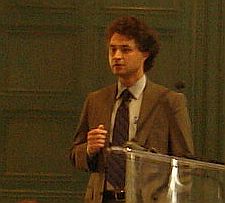 New book:  MBAs of the future

Take three words (designing, thinker, future) and put them together to make you comfortable

Something about designing a thinker

Mind is an uncontrollable organ

Opportunity:  the new workforce, to create value, relies on a new skill set

When don't have a science, often call it tacit

General manager wants to integrate:  the tacit skills integrating across the domains

Can have different mental models of fairness, e.g. end of year performance review, with a response coming back "it's not fair"

Cognitive pragmatists not only think about what I should do, but also what should I think, how I should think, and why

Evidence that you think it's helpful to be a cognitive pragmatist:

Judgement in the future, often is based on a few data points

What do sophomores do?

Reason for knowing this is to have people reflect

Walk the talk: all of the preceding are in the mind, can you get your being to take this

Need to think about how to train the will

These are four modules, out of a projected 7 or 8, to understand the nuts and bolts of integrative thinking

Research project will be called "winking at reality"

Effect of self-confidence on suspending belief or disbelief