What if a pattern language was opened up to contemporaneous research into wicked problems, the systems approach, ecological epistemology, hierarchy theory, and interactive value?  This 30-minute presentation at Purplsoc 2017 last October aimed to provide a broader context to a social change community focused on works of Christopher Alexander.

This talk was a complement to “Pattern Manual for Service Systems Thinking” presented a year earlier, at PUARL 2016.  Last year, the agenda was centered on the approach from Christopher Alexander, and divergences due to the changing in domain from the built environment to service systems.

The slides on the Coevolving Commons are dense.  I had showed them at the poster session in the day preceding, and promised to spend more time speaking to them in the workshop scheduled for the next day.

For 2017, the view looked beyond Alexander, to related research both at Berkeley, and elsewhere in the systems community.  The agenda was in 3 major sections (here expanded with more detailed overview of the middle section):

The slides have now been matched up with the digital audio recording, for viewing as a web video.

The classroom was acoustically favourable, and audio recordings are downloadable.

Downloadable video files may be better for devices that disconnect from the Internet.

My speaking was rapid, covering a lot in 30 minutes.  For the more patient, the paper written for the proceedings may be easier to follow. 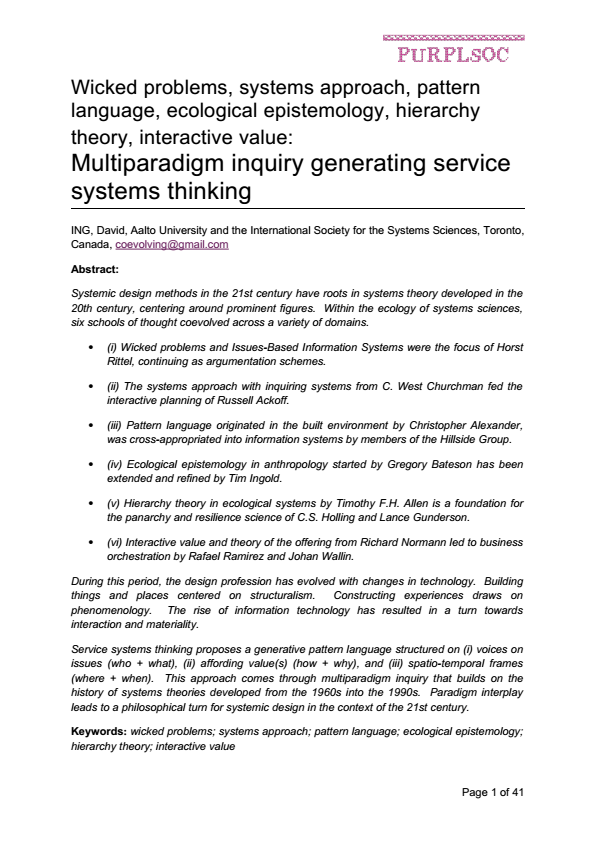 Approaching service systems from a multiparadigm approach expands the relevant body of research for pattern language beyond the original domain in just built environments.