I was looking at the One Laptop Per Child project â€” that’s the initiative that has to goal of designing a computer at a price less than $100USD, particularly targeted for education in third world countries. There are some really smart and creative people working on making the vision of an education project real. In fact, I’m impressed that there seem to be some features for a product targeted for children that I typically don’t see on my business-class computer. 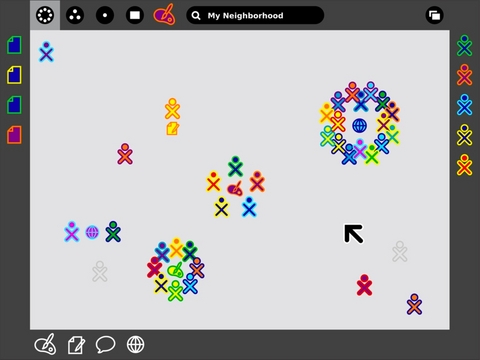 In the Stadia class yesterday, I played the first 15 minutes of the iPhone introduction to open up some discussion. Today, I watched the entire keynote address at Macworld San Francisco 2007 by Steve Jobs. (There’s a quicker digest on Engadget, if you don’t want to watch Quicktime). Upon reflection, there’s technological innovation, business innovation, and a potential Achilles heel.

On technological innovation, Apple is a master in user interface design. The most important invention â€” that surely is patented â€” has to be the accelerometer. Steve Jobs inferred that using a stylus (as in Palm PDAs, and in the original Apple Newton) would be obsoleted by using a finger, but this really all has to do with pointing precision. If the icon is large enough, a finger works fine on the Palm user interface. However, when we get to large amounts of scrolling, the accelerometer is a huge advance over a windowed slider and is an arguable improvement over a mechanically simpler jog dial (as in Sony devices).

It’s been six months since I last wrote about revisiting RSS reader choices. I decided to do a little housekeeping on my computer, and ended up switching to Feedreader.

I’ve been using GreatNews as my RSS reader, but have been disappointed that multi-selection is still not available. This means that a lot of articles have been building up, and I have to delete them one-by-one.

As I was posting an entry to a forum using Thunderbird, it occurred to me that Thunderbird actually supports RSS feeds, too. It works a lot differently from GreatNews (and RSS Bandit) though.

So, how much of the browser world does my work cover? According to statistics for December 2006 from TheCounter, here’s the top 8 browsers in use (from their list of 18).

I’m not the biggest fan of Buckminister Fuller, but I do respect people who follow his work. I was reading a blog entry on “A sentence about yourself“, where Flemming Funch cited Buckminister Fuller’s “one-sentence statement of his life objectives”. This contained the phrase “Comprehensive Anticipatory Design Science” … which I hadn’t seen before.

There’s a section on Design Science at the Buckminister Fuller Institute where there’s a description. Looking at the Design Science Methodology description, the approach looks to be pretty teleological (i.e. where do we want to be, where are we now). This is much in line with idealized design approach developed by Russell Ackoff.

Both Fuller and Ackoff were architects, so parallels shouldn’t be surprising. However, I’ve fallen off design-oriented (teleological) philosophies towards situated practice (phenomenological) approaches. I started with situated learning (from Etienne Wenger), and then dug in farther with theory of practice (from Pierre Bourdieu) and disclosing new worlds (Charles Spinosa, Fernando Flores and Hubert Dreyfus).

Still, I was intrigued to find a book by Amy C. Edmondson on A Fuller Explanation: The Synergetic Geometry of R. Buckminster Fuller. It’s the type of book that I would probably buy, except the 1987/1992 book is out of print (and really expensive, used). I may have to check it out of the University of Toronto library … after I’m doing working on my dissertation!

Another reason for triggering on this thread was that I’ve seen Amy Edmondson (from Harvard) visiting at the Rotman School Integrative Thinking seminars.… Read more (in a new tab)

I follow Paul Dourish‘s work because I find that his philosophy of science, combined with his corporate research background, puts him close to the way I usually think. In “Reimagining the City: The Cultural Dimensions of Urban Computing“, he and Amanda Williams say …

…. we argue for place as process rather than object or container. [p. 42]

The article is actually centered on mobile information technologies (e.g. the Internet on your phone, while you’re in a city), but the idea frames the idea of place in a different way for me.

Firstly, treating cities as generic (i.e. urban is not rural) doesn’t reflect that each city has its own merits, demerits and “feeling”.

… we view cities as culturally and historically specific, rather than homogenous, and are attempting to open up new perspectives on urban computing by exploring their cultural dimensions. [p. 38]

This rapidly send us into what is meant by “cultural”.

The word “cultural” can be interpreted in two different ways. The taxonomic view recognizes that cities in Britain are different from those in the US, Australia, or Asia. Though it allows for categorization and classification, the taxonomic view of culture obscures a deeper meaning.

We are more concerned with the generative or interpretive notion of culture, which recognizes that cities reflect and reproduce cultural values, and that encounters with cities represent opportunities for cultural work. [p. 38, editorial paragraphing added]

The way I read this, cities not only shape urbanites (the people in the cities) … but urbanites also shape the cities.… Read more (in a new tab)