The 1995 article by Spinosa, Flores & Dreyfus on “Disclosing New Worlds” was assigned reading preceding the fourth of four lectures for the Systemic Design course in the Master’s program in Strategic Foresight and Innovation at OCAD University.  In previous years, this topic was a detail practically undiscussed, as digging into social theory and the phenomenology following Heidegger is deep.  Peter Jones and I are fans of ideas expanded into the 1999 book. I was privileged to visit personally with Fernando Flores in Berkeley in 2012, as I was organizing the ISSS 2012 meeting.  Contextualizing this body of work for a university course led into correlated advances in situated learning and communities of practice.

A preface to the lecture included The Practice Turn in Contemporary Theory, and revisiting Change as Three Steps to clarify what Kurt Lewin did and did not write.

The agenda was in four sections. In the timebox available, the lecture covered the first two:

Slides for the last two sections were ready to go, but foregone in favour of other course work priorities.

This fourth lecture is available on Youtube as streaming web video.

For those who prefer to watch while disconnected from the Internet, here are downloadable video files.

The full slide deck is also downloadable from the Coevolving Commons. 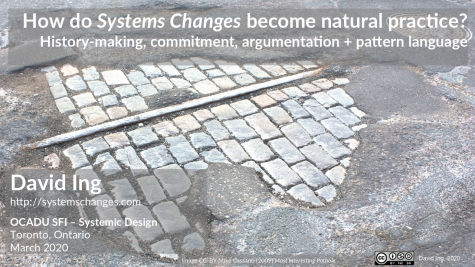 The presentation slides were paced at slightly different rates.

The digital audio has versions boosted by 3db in the case playback isn’t loud enough on an audio player.

The latter two sections of slides (i.e. C, and Postscript) may be covered in some other venue, sometime.