I had previously written that “the (new) service economy is not the same as the service sector“. There’s an deep problem in trying to define and measure something new, when we have to rely on government statistics that have an anchor point of 1980, 1971, or even 1945. Using old definitions doesn’t necessary invalidate the measurements, but is problem if we’re dealing with a paradigm shift in a scientific revolution.

In quantifying economic systems, many of the approaches take an output-oriented (i.e. GDP or value-added) approach. Another alternative is to take an input-oriented approach (i.e. labour). Looking into labour has brought me back to Richard Florida’s research. In The Rise of the Creative Class (2002) appears a breakdown of U.S. statistics that contrast to the three-sector view. 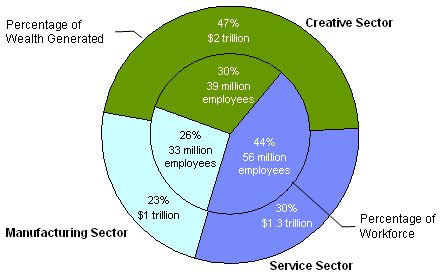 Figure 2.2: The Economic Impact of the Creative Sector

The creative sector of the economy accounts for 30 percent of U.S. employment and nearly half of total wages and salaries — roughly equal to manufacturing and service sectors combined. Compiled by Kevin Stolarick from U.S. Bureau of Labor Statistics. [p. 29]

The sorting of occupations into the new categories is explained for U.S. statistics in the appendix to The Rise of the Creative Class (2002).

The most current system of occupational classifications was introduced by the U.S. government in 1998. This, the 1998 Standard Occupational Classification (SOC) System, is the most up-to-date system available …. [p. 328]

Service Class: The Service Class is composed of the following major occupational categories:

This classification can be compared to the output-oriented three-sector breakdowns of national economies. The part associated with agricultural is roughly the same. Much of manufacturing is recast as working class occupations, although employees not hands-on to making products would probably be classified as creative class occupations. The traditional view of service sectors is totally changed.

I’m generally disappointed in the use of U.S. statistics in discussions on the shift towards a “new” service economy, leaving readers to project to world trends. I’m happy that Florida’s research continued, and he has found a way to map International Labour Organisation statistics.2 I haven’t found a writeup of the detailed mapping from ISCO-88 to the creative class occupations, but I can clearly see how that could easily be done.3

I’ve reproduced a chart that demonstrates the use of international statistics by Richard Florida in Harvard Business Review in 2004. 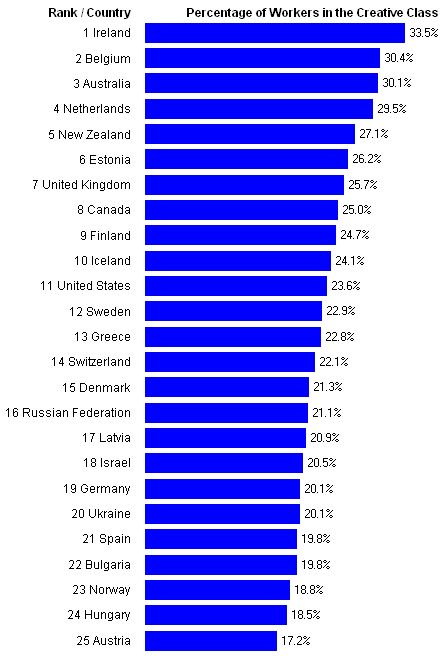 Note: Data for the Russian Federation refer to 1999; for the Netherlands and Bulgaria, 2001; for the United States, 2003. All other figures refer to 2002, the latest year for which those data are available. Source: Compiled by Irene Tinagli from International Labour Organization and U.S. Bureau of Labor Statistics data. [p. 126]

As I’ve been making distinctions between the “new” service economy and the service sector, Richard Florida emphasizes his discomfort with being associating his view of the creative class with the “new economy” in his 2004 book.

It’s Not the New Economy, Stupid
… my work has always taken aim at 1990s New Economy fantasies …. In the preface to The Rise of the Creative Class, I decry “the naive optimism of the so-called New Economy.” The first chapter notes that “not all is rosy” for workers today: “With no big company to provide security, we bear much more risk …. [We suffer] high levels of mental and emotional stress …. We crave flexibility but have less time…. The technologies that were supposed to liberate us have invaded our lives.” Later, I write, “flexibility does not mean the end of long hours…. [….] [p. 61]

It should be obvious even from these brief excepts that my theory is no homage to the so-called New Economy and the Internet age. […. the] truly big changes of our time are social, not technological. [pp. 61-62]

I agree that economic progress isn’t only about technological progress. To be complete, Florida see three variables in his 2004 book.

… 3Ts of economic development: Technology, Talent and Tolerance. Economists have typically emphasized the first two Ts, but to truly prosper in the creative age, all 3 Ts, and especially the third one, tolerance, are essential

The first of the three is also the least controversial; economists have long argued that technology is the key to growth. [….] [p. 37]

Talent is the second variable in my model. Leading economists, including Nobel Prize winner Robert Lucas, have argued that growth is a consequence of human capital, a view shared by Harvard’s Edward Glaeser. […] I capture the role of talent by substituting a measure of creative occupations for the typical education-based measure of human capital, thus emphasizing what people actually do over past educational achievements. [pp. 37-38]

This brings me to the third T, tolerance. […. Resources] like technology, knowledge and human capital differ in a fundamental way from more traditional factors of production like land or raw materials; they are not stocks, but flows. People are are not forever wedded to one place; they can and do move around. The technology and talent that people therefore equally bring with them are mobile factors, and accordingly flow into and out of places. [p. 38]

Much of the focus in creative class research is on regional economic development, with a focus on the third T, tolerance. In the pursuit of a science of service systems, though, I think that there’s great value in the analysis that Richard Florida’s team has done with rethinking the measuring of talent.

Note: The 1999 Employment and Earnings data add to slightly less than the total because some occupations are not listed. The OES data omits agricultural workers, so only those in agriculturally related employment are included.
Sources: U.S. Bureau of the Census, Statistical Abstract of the United States: 2000, Washington, D.C., 2000, Table 669; U.S. Bureau of Labor Statistics, Occupation and Employment Statistics, 1999, available on-line. [p. 330]

2 Florida continues to use U.S.-based statistics for the U.S., and then ILO data for the rest of the world, described in The Flight of the Creative Class in 2004.

The measure of creative occupations is based on International Labour Organisation (ILO) statistics. The ILO collects detailed data on occupations, breaking the workforce down into job categories such as scientists and engineers, artists, musicians, architects, engineers, managers, professionals, and so forth. While the ILO categories differ somewhat from the U.S.-based statistics used in The Rise of the Creative Class, they are the best available measures of creative occupations worldwide. All ILO data used here has been classified according to the international standard ISCO-88 in order to ensure comparability across European countries. The U.S. data are from the Bureau of Labour Statistics. We estimate the creative class in two ways because of variations in how the different nations treat the category technicians. Our ‘broad definition includes scientists, engineers, artists, cultural creatives, managers, professionals, and technicians; the “narrow” definition excludes technicians. [p. 272]

3 As an exercise, I’ve created a table of the occupations with the creative class categorizations in the left column, and ISCO-1968 major groups (which seems to have a longer history). ISCO-88 is a revision of the categorizations which seems to have similar minor groups, but the major groups are a bit messier (e.g. Major group 9 Elementary occupations bundles sales and service with agriculture, fishing, mining, etc.) With time and motivation, the proper ISCO-88 minor groups could easily be mapped.