For their community of systems practitioners, Systems and Complexity in Organisation (SCiO) UK invited a presentation at their Virtual Open Meeting in July. Presenting in a 45-minute slot, the slides at http://coevolving.com/commons/2022-07-11-doing-thinking-making-systems-changes were covered in 38 minutes, leaving time for a few questions and comments.

The agenda mainly focused on “Doing”, with “Thinking” and “Making” referring to others presentations now available as recordings online.

The “doing” section provides a minimal briefing on (i) rhythmic shifts, (ii) texture, and (iii) propensity. From there, the practices are depicted as a hub with four spokes.

This video available on Youtube has also been archived on the Internet Archive .

A principal aim for the Systems Changes Learning Circle is provide guidance that is practical in use. While theory and methods have been developed in parallel, this presentation may provide an easier entry into reorienting towards rhythmic shifts as a central focus. Some compatibility of a systems change approach with the rich heritage of systems sciences is retained, and available with a deeper inquiry.

The SCiO event was a double-bill with “Systems Leadership, Change, Theory and Practice” by Benjamin P. Taylor, a sometime companion on our journey, on the second half.

The original description for the first half of SCiO virtual open meeting is replicated here..

Practitioners coming to the systems sciences and/or systems thinking have an interest in “systems change(s)”. Many come from premise that that change occurs as “unfreeze-move-refreeze”, misattributed to Kurt Lewin. A more reflective view of systems changes not only sees distinctions between the intended and emergent recognized by Henry Mintzberg, but also an ecological epistemology. That leads to an appreciation of living systems in a temporality of the landscape as described by Tim Ingold extending the tradition of Gregory Bateson.

Beyond the metaphysics of Heraclitus and Parmenides, the sciences of systems can be extended through a philosophy of science underpinning Classical Chinese Medicine. The ontology of contextual-dyadic thinking outlined by Keekok Lee is in contrast to the Western dualistic thinking.

For novices, the central concepts in the Systems Changes Learning approach are: (i) rhythmic shifts; (ii) texture; and (iii) propensity. Practices are depicted as a hub of “knowing from within”, and four axes of (i) recognizing contextural influences; (ii) diagnosing rhythmic disorders; (iii) prognosing likelihoods; and (iv) reordering pacing.

In workshops, metaphors of (i) sun waxing and waning; (ii) musicians weaving into an ensemble; and (iii) motions riding a surfboard, have effectively reframed thinking about systems changes. Providing a workbook with guiding questions has aided self-organizing groups to surface their points of view and engage in rich discussion, with a minimal coaching by facilitators.

Ongoing action learning on doing (praxis), thinking (episteme) and making (poiesis) by the Systems Changes Learning Circle is in year 4 of an espoused ten-year journey. 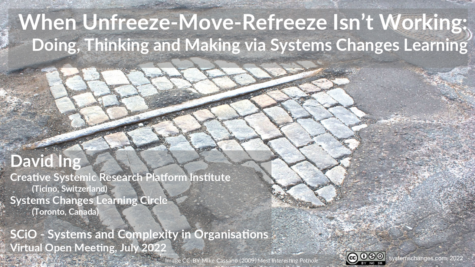