Teaching methods in a master’s class is different from lecturing on theory.  There’s more emphasis on how, with why subsequently provided as the need for that arises.  Since I had given a dense 20-minute theoretical talk in the month earlier, the invitation from Satu Teerikangas to the program in International Service Business Management was an opportunity to stretch out at a more leisurely pace with students, as they’re preparing for thesis work.

The 3 hours class was conducted in parts:

The classroom interaction was recorded in audio, and is complemented by slides that had been posted on the Coevolving Commons. 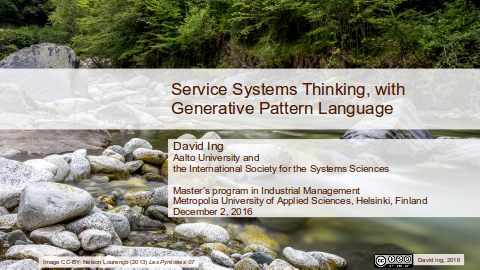 For people who prefer the real-time experience of being in a classroom, video and audio are provided, below.

Covering the first 17 slides took 85 minutes.  While the students in Finland are fluent in English, speaking slower aids comprehension.  Satu had invited a teacher observer to watch my style in class.  Afterwards, she remarked on my impromptu telling of a joke about ham and eggs, which is known as a fable on the chicken and the pig.  To be more precise on this story, here’s a better-researched version of the original by Bennett Cerf, published in many American newspapers in October 1964, syndicated by King Features.

A pig and a chicken, alleges W. R. Grady, were promenading down a Fort Worth thoroughfare when the chicken suddenly proposed, “Let’s stop in at yonder beanery and eat some ham and eggs.”

“A thoughtless and repugnant suggestion,” was the pig’s reaction. “Kindly remember that for you a dish of that sort is a mere contribution. For me it means a total commitment.”

When I am in person and able to see the eyes of students, I sometimes pause for listeners to catch up, or climb down the ladder of abstraction.   Here are audio recordings, synchronized with slides.

The video is #1 of 2 available on Youtube.  Alternatively, listeners on the move may prefer a downloadable version.

A break from the lecture was taken as coffee arrived.

To try out the activity of creating a pattern language, I guided students through understanding the form presented on slide 17.  Here’s what they saw on the big screen.

We collaborated on creating some preliminary patterns, discussing ideas and recording them on the big screen.  The audio was recorded, but listening to dialogue for 50 minutes isn’t the same as being there in person.

During the break, one student had asked about whether we could use pattern language to describe a resourcing service system.  Here’s the result.

With one pattern done, we looked for another to try out.  Multiple students were doing research into Mobility as a Service, so we tried that.

Pattern 2: Mobility as a Service

We didn’t critically assess the validity of these two patterns, as we were just learning how the format works out.  The process did clarify that writing patterns is much better as a group activity, rather than as a single individual attempting to independently wordsmith on a blank page.

Having had the experience of writing patterns, some time could be spent on the reasoning behind the format used, and considerations in the approach. We didn’t have time to finish the complete presentation, and covered about 8 slides. This more theoretical content is available as video #2 of 2 on Youtube.

Here are some downloadable versions.

Service systems thinking expressed in the writing of a generative pattern language is still in its infancy.  I encouraged students to contact me if they decided to use pattern language in their thesis work.  Satu subsequently reports that some students looked further into the history of pattern language books, so maybe there might be renewed interest in the approach, with the adjustments that I’ve proposed.