At the PUARL Conference 2016, a proposal was made on adapting pattern language for service systems thinking.  In 1967, Christopher Alexander published Pattern Manual at the founding of the Center for Environmental Structure, describing a pattern format for physical built environments.  While we can learn a lot from the nearly 50 years work originating at the CES, service systems have features beyond physicality that suggest reconsidering some of the foundations of pattern language.

An article for discussion was accepted into the proceedings for the PUARL conference.  The 20-minute presentation quickly covered the following topics:

Slides have been added over the audio recording to produce a video presentation.

For people who prefer visuals at their own pace, the slides are posted on the Coevolving Commons.  The video is available on Youtube. 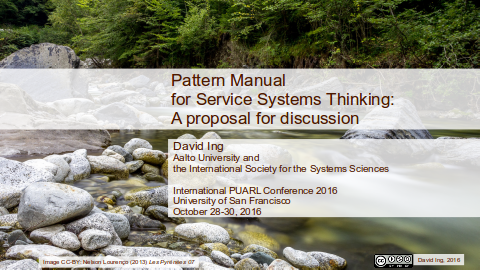 What is properly required to take the learning on generative pattern languages from the built environment and software development communities, to a world of service system thinking?

This position paper winds back to early days of Center for Environmental Studies, and presents an alternative view on the 1968 Multi-Service Center work, informed by 21st century developments in service systems science. The conventional format for a pattern language has settled into a three-part rule of relations between context, problem and solution. An alternative format of (i) voices on issues (who + what), (ii) affording value(s) (how + why), and (iii) spatio-temporal frames (where + when) is proposed, with a straw man example.

Methods from the 1985 Eishin campus project, published in 2012, are compared against practices that have become common in agile development.

The conceptual shifts from built environment to service systems thinking are expressed as (i) amplifications, (ii) rephilosophizations, and (iii) reinterpretations. The generation and legitimization of pattern languages is considered across a community, with a shift from publishing in books on paper to collaborating with online technologies such as wiki.

At the 2014 PLoP and the 2015 PURPLSOC conferences, the idea of extending the pattern language for environment structure into a new domain of service systems thinking was introduced. In 2016, this idea has been further developed as a baseline for further discussion

Following on from the presentation at Purplsoc in July 2015, and he article revised for the proceedings of PLoP 2014,  I’m looking forward to opportunities to discuss these ideas further. 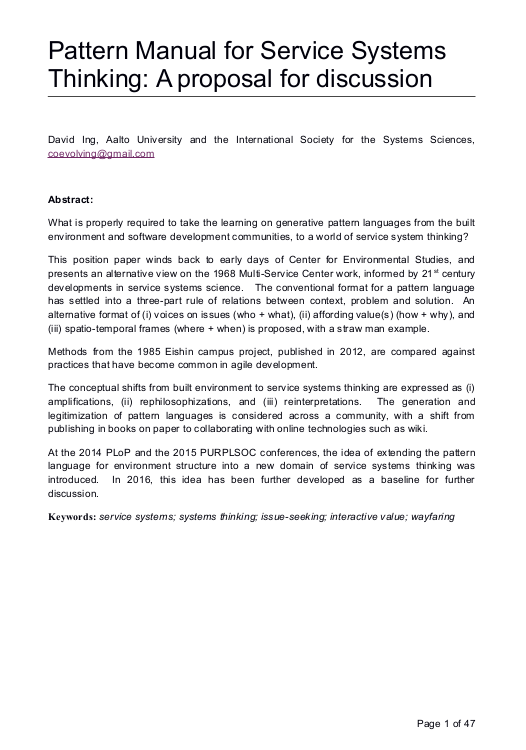