Systems Thinking World — a LinkedIn group with dialogue from over 19,000 members — ceased to exist by October 28, 2015.  It was a place where learners (new and old) of systems thinking came to overcome barriers, from 2009 through 2015.  A change in the terms and conditions at LinkedIn led to the group owner to move on.  The scale of worldwide participation in Systems Thinking World was significant, and the journey was the subject of a presentation at ISSS DC 2014.

While cleaning house, the Facebook Group formerly known as Systems Thinking World came into the hands of a new owner, and was retitled (at least temporarily) as The Ecology of Systems Thinking.  The new owner has a more open approach, and has authorized additional members to be administrators (including me).  The group had changed temporarily to be closed (i.e. content visible only to members), and Facebook won’t allow groups with more than 250 members to revert from closed to open.

Is there an alternative to the centralized structure of (a) forum owner(s) and members?

Actually, there is.  The diaspora* foundation has a different approach:

diaspora* is based on three key philosophies:

Decentralization: Instead of everyone’s data being contained on huge central servers owned by a large organization, local servers (“pods”) can be set up anywhere in the world.

Freedom:   You can be whoever you want to be in diaspora*.  [….]  diaspora* is also Free Software, giving you liberty to use it as you wish.

Privacy:  In diaspora* you own your data. You do not sign over any rights to a corporation or other interest who could use it.

The history of the diaspora* social network platform goes back to 2010, with a Kickstarter project.  Since 2012, it has been an open source community project.  The project blog shows a continuing stream of releases, so the technical community appears to be viable.

I have had a profile at https://diasp.org/u/daviding since 2011, but haven’t had a reason to exercise the platform.  Maybe the demise of Systems Thinking World is a sign that it’s time for a big change.  I’ve started Systems Sciences groups on Google Plus, Facebook and LinkedIn.  I’ve been experimenting with federated wiki.  Although others may have become comfortable with ease of a corporation managing their content, I’ve always been an advocate for self-sufficiency.  So, in a learning-by-doing mode:

Join me!  Signing up to diaspora* is easy.  The first decision is choosing a pod.  If you want to follow my example, you could sign up at disasp.org.  (The disasp.org server is physically in New York.  If you normally converse in language other than English, you could pick a pod geographically closer that encourages dialogues in your native dialect).  It would be nice if you reciprocated with a real identity, and posted a photo.  You can even link your profile from Facebook, so you don’t have to fill in all of the fields.

Moving an online community is not something that can (or should) be done by an individual.  However:

“Never underestimate the power of a few committed individuals to change the world.  Indeed, it’s the only thing that ever has”.

The Systems Thinking online community should aspire to be open-minded to new ideas.  A federated social web is a new idea.

This declaration doesn’t mean that you won’t see me on Google Plus, Facebook and Linked. One friend has called me an closet extravert, when it comes to social media. 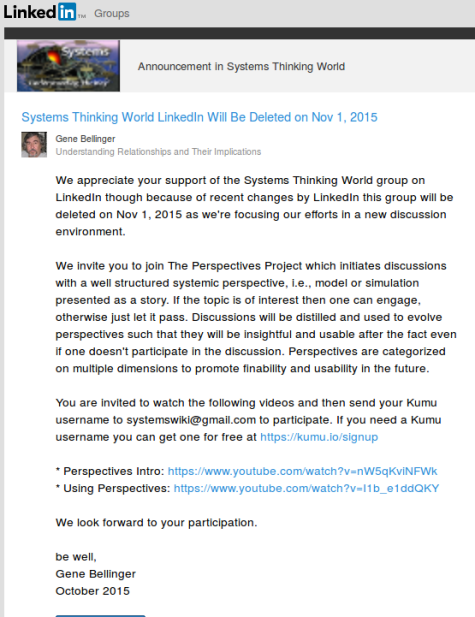