With governance of online communications a problematique, the Systems Changes learning circle has actively been advancing our collaborations on the Open Learning Commons as an open platform, and the Digital Life Collective for semi-private communications.  Complementing the Systems Community of Inquiry, this combination of technologies presents alternatives for Systems Thinking communities who are uncomfortable with the terms and conditions of commercial providers (e.g. Facebook, LinkedIn).

The systems sciences community was invited to participate in workshops at the ISSS 2019 Corvallis meeting in June.

The governance of the Open Learning Commons operates under Creative Commons licensing.  The Digital Life Collective operates globally as a member-owned platform cooperative, incorporated under a UK jurisdiction.

Joining these online platforms may not be as convenient as having a commercial enterprise “take care” of communications amongst individuals.  While I personally participate (and am named in groups of administrators) on most major social platforms involving systems thinking, my depth of involvement is consciously selective based on terms and conditions.  On a Dec. 23 thread on The Ecology of Systems Thinking group on Facebook, I responded to some questions, and have permission to repost the exchange publicly.

If we can’t have a discussion about politics here, then I think we fail as group administrators, since politics is an overriding system that typically CONTROLS all others.

If folk REPORT a post we need to consider why, not react like frightened crocodile keepers, because otherwise we are fodder for political manipulation ourselves.

Personally I believe in free speech, and if it’s respectful and non harming, bearing in mind all speech can influence, then that should be allowable.

Absence of disagreement and discussion is itself unhealthy … Carrying out disagreement respectfully and publicly would be a better example to set in social media.

Can we please discuss this rather than work in a knee jerk and subject to manipulation fashion?

If it has been discussed, then personally I feel that either FB or others have decided to exempt me from that discussion.

Unilateral post suspension is not a systemic or representative way of dealing with difficult issues, and we do need a system for approaching this aspect.

Please see discussion above, and can someone please ping David Ing, given his FB preferences and behaviours are more selective …

David Ing My general direction had been to minimize the use of Facebook, because there are defects in the Design of the Inquiring System. See https://twitter.com/MitroffCrisis

David Ing The closest alternative to Facebook is Mastodon, e.g. the Question Others, Teach Others site can we seen at https://qoto.org/@daviding

David Ing Of the tools for Systems Changes, discussion is best at https://discuss.openlearning.cc/ , which is in the Discourse technology.

David Ing And of course, there’s the Systems Community of Inquiry that orients towards more personal points of view, https://stream.syscoi.com/

David Ing All of these other alternatives have different forms of governance. Facebook is limited in its ability to administer groups effectively without a benevolent dictator or mutual accountability group. For the latter, make everyone an administrator … but then you’ll have a convergence issue. This is a defect in the design of Facebook groups.

Peter Jones David, thanks, but can you address this specific issue rather than provide a preset response?

You are drawing a blanket over the whole of FB without recognising that different groups behave differently. And they definitely do.

And no halfway house between benevolent dictator and total accountability?

What about those folk who choose to opt out? Do we force them to be engaged and accountable?

Don’t we need to look at this and FB properly to understand group dynamics?

Is there no emerging theory? Is it all already written?

Sorry, far too many questions, I realise …

David Ing Peter Jones That was NOT a preset response. This group is an a problematique in choosing to use Facebook. I will now respond to each of your subquestions in a psedo-threaded response (which is all the Facebook will allow.

David Ing Peter Jones wrote:
> You are drawing a blanket over the whole of FB without recognising that different groups behave differently. And they definitely do.

When you try to separate Facebook from the human activity system, I would argue that you are attempting to break away the technological from the social.

The key question would be: can you exercise the Design Principles (i.e. at least DP1 and DP2), within the constraints of Facebook?

The issue is that there is balance between legal order and negotiated order. This has been researched at:
Parhankangas, Annaleena, David Ing, David L. Hawk, Gosia Dane, and Marianne Kosits. 2005. “Negotiated Order and Network Form Organizations.” Systems Research and Behavioral Science 22 (5): 431–52. https://doi.org/10.1002/sres.717. Alternate search at https://scholar.google.com/scholar?cluster=15383482901768973100

Part of the larger context is that Facebook has most of the control over the legal order. Within Facebook groups, where there are multiple administrators, there isn’t much real legal order, only negotiated order.

If we compared to open source communities, Linux has Linus Torvalds as benevolent dictator for life. He has said that after he dies, Linux becomes someone else’s problem.

David Ing Peter Jones wrote:
> What about those folk who choose to opt out? Do we force them to be engaged and accountable?

Human beings have will. Thus, we can’t force anyone to do anything, we have to negotiated with them. (I’m really channelling David Hawk, in his citing of Hirschman (1970) Exit, Voice and Loyalty, search at https://scholar.google.com/scholar?hl=en&q=exit%20voice%20and%20loyalty

The question comes: who has voice,and who doesn’t? David Hawk likens this to a church. There are those who will voice dissent, not be heard, and then choose to exit. On the other hand, there are those who love the church so much that they become heretics, and are willing to be burned for their beliefs.
For that, see “A Time for Heretics, orginal for 1996, rejected by IIB” | David Hawk | 1996 at https://www.academia.edu/40022018/A_Time_for_Heretics_orginal_for_1996_rejected_by_IIB

David Ing Peter Jones wrote:
> Don’t we need to look at this and FB properly to understand group dynamics?

Let me address this question with some other contexts that i’ve been reading along the way. (Yes, I actually do read the posts in the Systems Thinking Network Leadership Group, but on principle minimize my interaction in a private group that doesn’t permit open membership and discussion).

There was a question of whether to allow or not allow political discussions within this group. C. West Churchman writes that the Systems Approach (in what he would call “sweeping in” in the Design of Inquiring Systems) needs to engage and embrace (i) Politics, (2) Morality, (3) Religion, (4) Aesthetics, all as enemies.

Churchman, C. West. 1979. The Systems Approach and Its Enemies. New York: Basic Books.
Since this book isn’t readily accessible via Google Books, I made the effort to create an extract at http://coevolving.com/blogs/index.php/archive/the-systems-approach-and-its-enemies-c-west-churchman-1979/

David Ing Peter Jones wrote:
> Is there no emerging theory? Is it all already written?

Yes. I do admire and appreciate your persistence and energy in herding cats in the Facebook Group. However, the defects in the inquiring system with a single platform are too large to be the primary focus for action-oriented research going forward.

This is why I’ve been so engaged with the Digital Life Collective (that is legally formed as a UK Cooperative, and thus satisfies the legal order parts of the Annaleena Parhankangas et al. paper), and the Open Learning Commons (primarily through the leadership of Robert Best) with communications that occur in public spaces, rather than the walled garden of Facebook. http://openlearning.cc/base/

I use Facebook every day. My family has a private chat channel. I read practically all of the alerts. However, in my professional life, I’m advocating for the Open Learning Commons, where works are under Creative Commons Licensing, so individuals can be held accountable for their words. (Now that I’ve written this long thread, you actually need to appreciate that under copyright law, you need my express written permission to reproduce this. People are free to read it, and even link to it, but they can’t copy it, under the enforcement of the Berne Convention of 1989 (i.e. the USA didn’t sign the 1886 agreement).

This response ends the long thread to your questions. I’ve responded specifically because you asked me to, and I respect that. However, I am disappointed because I have now spent this amount of time writing on Facebook, and my effort are not transparent to world, are buried in a subthread within a Facebook Group, and are subject to the user agreement that I signed with Facebook, Inc.

David Ing Peter Jones, an addendum:
Would you please grant me copyright permission to republish your questions to me, so that I can external the writing I have now put onto the Facebook platform? I won’t need permission from other members in the thread, because I won’t cite them.

And thank you for your detailed response, it is much appreciated, and lots to think about.

Peter Jones David, FWIW, I view everything in the public domain as public property, and I don’t publish stuff unless I mean it.

That means being fully accountable for my words at all times. At times a bit scary. But it doesn’t mean everything is fixed in stone, it’s simply a snapshot at that moment.

Learning continues, so the moving picture moves on …

David Ing Peter Jones While well-intentioned writers would like their words to be public, copywrite is the law of the land that requires explicit granting of permissions in each and every affixing of content to a medium.

The Creative Commons has done wonderful work in developing licenses for content creators so that individuals and organizations that want to remix work don’t have to track down the original creator. https://creativecommons.org/share-your-work/

If you look at the bottom of practically every website and document that I create, you will see a CC-BY-NC-SA logo and declaration.

This CC-BY-NC-SA is also on the Open Learning Commons site, and even in specific Systems Thinking channels on the Diglife platform.

Changing copyright on any Facebook content is difficult, because there is the bigger context of the End User License that users sign when the start using the platform. But how many people have actually read those terms and conditions?

It’s amusing that this December 2019 thread has reactivated discussion on a thread that I initiated on the open Internet as “Open Systems Thinking, Online Discussion, Governance” | September 2, 2018 | Systems Community of Inquiry, and then reposted onto Facebook at The Ecology of Systems Thinking.  One significant difference between the two platforms is that this writing on the open web is indexed and preserved on the Internet Archive, whereas  content on Facebook requires readers to first register for an account within the walled garden. 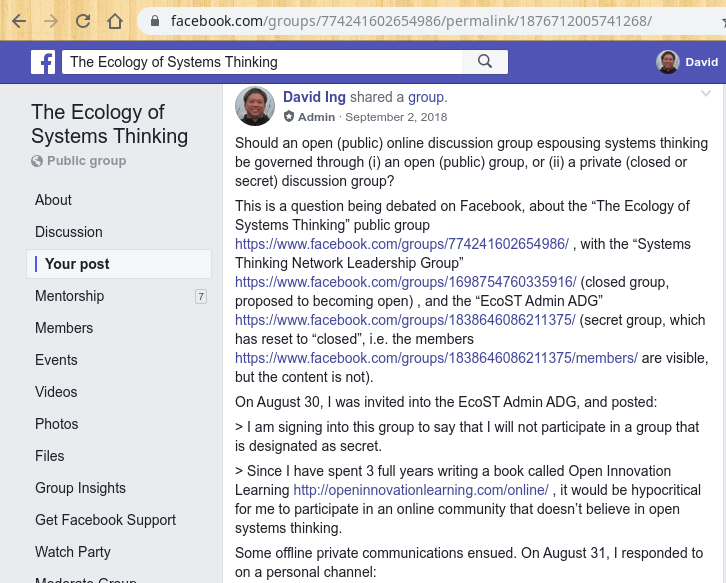