Slides and audio of our joint talk at the RSD5 Symposium on the experiences and learning about leading systems thinking courses are now available.

Over five years, the Creative Sustainability program evolved from pilot into full practice with a series of courses.  In reflection, the course instructors better learned how to guide students through teaming, mindset, methods and theory.

The presentation is titled “Curriculum Making for Trito Learning: Wayfaring along a meshwork of systems thinking”.  With such a dense title for the Relating Systems Thinking and Design Symposium, our aim was to explain what those chosen words meant.

The streaming media adds the slides to the audio presentation.  In person, in Toronto, we had two instructors from the course speaking: David Ing and Susu Nousala.

In winter 2016, the Systems Thinking 2 course in the Creative Sustainability (CS) program at Aalto University was led by one of the original curriculum developers from 2010. Over five years, the core CS curriculum had evolved, allowing the level of learning amongst student to advance to a higher level. While this winter 2016 cohort of students was challenged by the intensiveness of the course, satisfaction in the learning appeared to be high.

Following the phenomenological ecological practice theory of Tim Ingold, curriculum making should not be framed primarily as a transmission of information, but instead as a togethering environment where knowledge reproduces amongst the learners. Becoming an authentic systems thinker has each individual progressing on a unique line, wayfaring through an education of attention. Each learner builds on his or her distinct prior experience to stake a position on new ideas, observe the positions of others, and describe a new synthesis in a meshwork of knowledge.

The Systems Thinking 2 course was launched with a orientation where students groups were given 3 weeks to digest references into a group position. Each group then guided classmates through ideas that resonated for them, often amplified through metaphorical stories and exercises. Challenge groups inquired on the positions staked, surfacing deeper questions in dialectic. Each student was then to write a short blog post within a day or two on his or her learning, encouraged on public online web sites where the instructor would comment. Concluding the course, the student groups each prepared an infographic highlighting the most salient content not just of their original positions, but of their appreciation of systems thinking across all they had heard within the past three weeks.

In the logical categories developed by Gregory Bateson, the value of Systems Thinking 2 is in elevating students to becoming trito learners, beyond the levels of proto learning and deutero learning in the prior core courses. These skills are expected to help reduce the commission of errors of the third kind (E3) and fourth kind (E4), in a meta-system of inquiry described by Ian Mitroff.

Patricia Kambitsch created a sketchnote during the presentation. 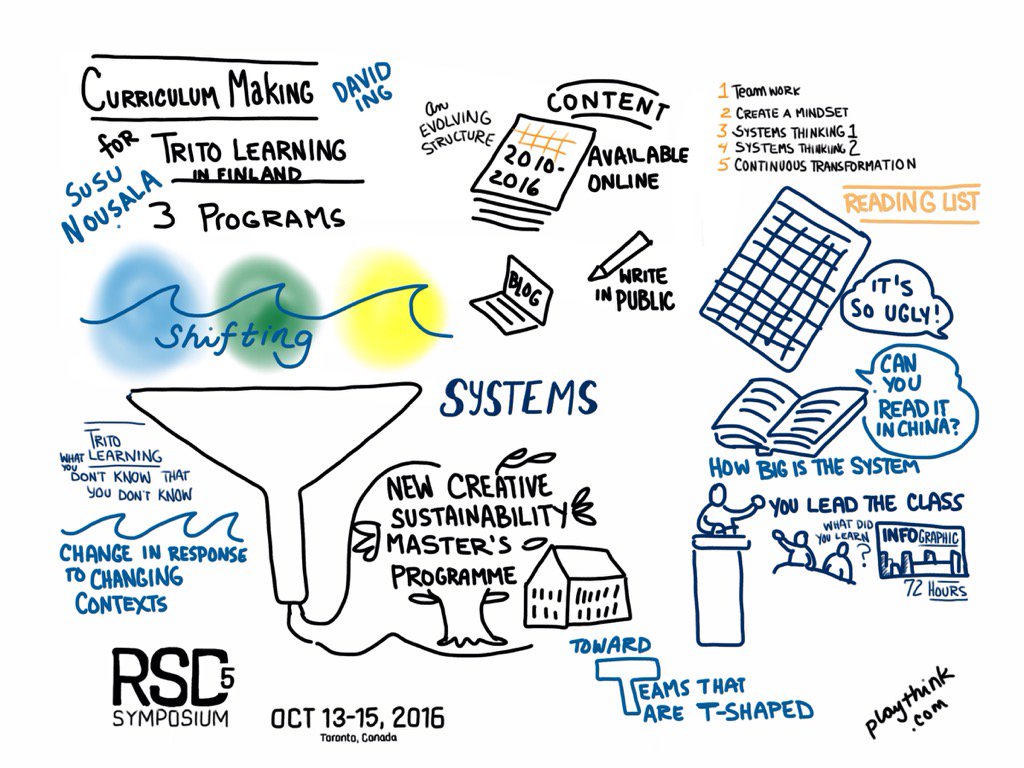 For people who prefer visuals at their own pace, the slides are available for download. 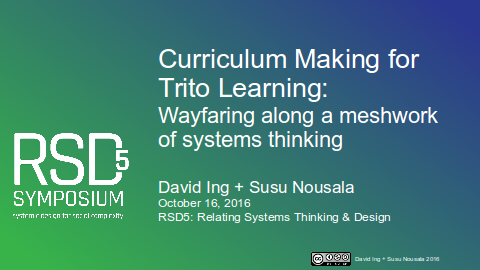 The slides are posted on the Coevolving Commons.  The video is available at on Youtube.  A written version of the content is targeted for the proceedings, and potentially formal publication.