Many who espouse systems thinking call themselves humanists, placing human beings and human social systems at the forefront of their efforts.  In the early 21st century, the anthropocene was introduced as a new geological epoch, in recognition that the most significant impacts shaping the Earth’s atmosphere comes from human activity. Can human beings share our world more equitably with other living beings, or will our nature lead to a tragic outcomes of our own making?

For the April 2022 session of Systems Thinking Ontario, David Ing reviewed some prereadings for a shared foundational context.  David L. Hawk was then invited to lead a discussion on the Systems Approach and its Enemies.

The conversation amongst participants was recorded, as an open discussion across a variety of perspectives.

This video available on Youtube has also been archived on the Internet Archive .

Humanism is “most generally, any philosophy concerned to emphasize human welfare and dignity, and either optimistic about the powers of human reason, or at least insistent that we have no alternative but to use it as best we can” (Oxford Dictionary of Philosophy).

The anthropocene “defines Earth’s most recent geologic time period (Anthropocene) as being human-influenced, or anthropogenic, based on overwhelming global evidence that atmospheric, geologic, hydrologic, biospheric and other earth system processes are now altered by humans” (Encyclopedia of Earth).

The systems approach “belongs to a whole class of approaches to managing and planning our human affairs with the intent that we as a living species conduct ourselves properly in this world”. (Churchman 1979, p. 8).

In a chapter on “Humans Regulating Humans”, David Hawk writes:

Can we reconcile humanism, the anthropocene, and enemies of the systems approach? 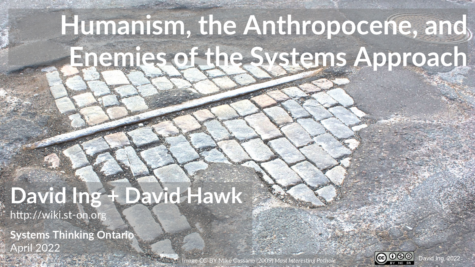