In order to appreciate the influence of resilience science and panarchy on ongoing research into systems changes, revisiting foundational works sometimes resurfaces insights.  In the 2002 Panarchy book, Chapter 15 provides a summary of findings.

In the course of the project hat led to this volume, we identified twelve conclusions (Table 15-1) in our search for sustainable futures. Those conclusions are reviewed in this section. [p. 395]

From this Chapter 15, let’s focus on point 6, “Three types of learning can be identified”, that is unpacked further down in the paragraphs.

6. Panarchies identify three types of change — incremental, lurching, and transformational — each of which can generate a correspondingly different kind of learning.

Incremental change and learning. This type of change occurs in the predictable development phase or from the r to K phases of the adaptive cycle (Figure 2-1). During these phases, models or schemas are assumed to be correct, and learning is characterized by collecting data or information to update these models. This type of learning is similar to the single-loop learning of Argyris and Schon (1978). In bureaucratically dominated resource systems, the activity of learning is carried out largely by self-referential professionals or technocrats who primarily view dealing with this type of change and learning as problem solving (Chapter 13). [p. 404]

Abrupt change and spasmodic learning. This type of change is episodic, discontinuous, and surprising. It is created by slow-fast dynamics that reveal the inadequacies of the underlying model or schema structure. It is the change described by transitions from the conservation phase (K) through the creative destruction (Ω) and renewal (α) phases of the adaptive cycle. This can be manifested as an environmental crisis, where policy failure is undeniable (Gunderson et al. 1995a) and results from an environmental cognitive dissonance. In this case, the learning is described as double loop, in which the underlying model or schema is questioned and rejected (Argyris and Schon 1978). This is also characterized as problem reformation. In bureaucratic resource systems, this type of learning is facilitated by outside groups or charismatic integrators.  [pp. 404-405]

Transformational learning. This is the most dramatic type of change and requires the deepest type of learning. Cross-scale or novelty surprises characterize this type of change and are related to interaction between different sets of labile variables. In these cases, learning involves solving problems of identifying problem domains among sets of wicked and complex variables (Chapter 13). Transformational learning involves several levels in a panarchy, not simply one level. This is also described as evolutionary learning (Parson and Glark 1995), in which not just new models or schema are developed, but also new paradigmatic structures (sensu Kuhn 1962).  [p. 405]

To ensure that we understand changes in the context of panarchy, let’s refer back to Figure 2-1 (in Chapter 2). 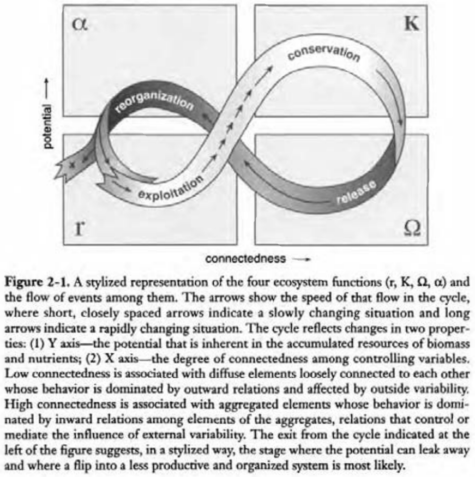 So, the first two types of change show up more clearly in the diagram.

Understanding the third type of change at multipe scales leads us to look into Chapter 3.

The organization and functions we now see embracing biological, ecological, and human systems are therefore ones that contain a nested set of the four-phase adaptive cycles, in which opportunities for periodic reshuffling within levels maintain adaptive opportunity, and the simple interactions across levels maintain integrity. What distinguishes the biological, ecological, and human systems from one another is the way inventions are accumulated and transferred over time. [pp. 73-74]

Two features distinguish this panarchy representation from traditional hierarchical ones. The first, as discussed earlier, is the importance of the adaptive cycle and, in particular, the a. phase as the engine of variety and the generator of new experiments within each level. [….] [p. 74] 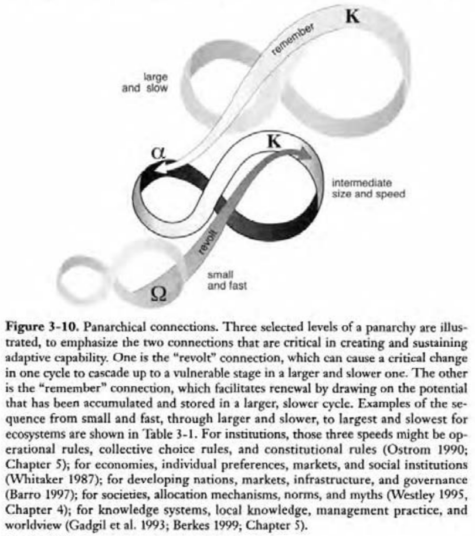 When a level in the panarchy enters its Ω phase of creative destruction and experiences a collapse, that collapse can cascade up to the next larger and slower level by triggering a crisis, particularly if that level is at the K phase, where resilience is low. The “Revolt” arrow suggests this effect — where fast and small events overwhelm slow and large ones. And that effect could cascade to still higher slower levels if those levels had accumulated vulnera- bilities and rigidities. [pp. 75-76]

Many novices see the adaptive loop in Chapter 2, and forget the cross-scale change in a smaller-faster connection cascading up as a revolt connection, and renewal facilitated by drawing on the larger-slower cycle in the remember connection.

Thus, making the tie back to Chapter 15, we have:

Transformation can be differentiated for de novo creation, presuming that a larger and slower cycle has already been in place.  We could consider cases where prior knowledge and learning is ignored, in Chapter 5.

Figure 5-6 provides a conceptual model of possible responses to a crisis situation. For our purposes, the crisis may be broadly defined as a large perturbation; it may be human-made (e.g., a resource collapse) or natural (e.g., a hurricane). Three generic responses are possible when a crisis occurs. 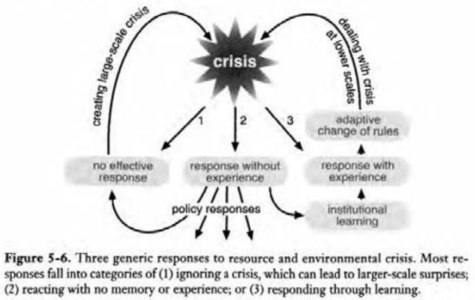 In centralized and bureaucratized management systems, the “no effective response” is the management reaction that often characterizes “brittle” (as opposed to flexible) institutions (Holling 1986; Gunderson et al. 1995). Such a response allows the disturbance to accumulate up the panarchy; that is, it tends to create the conditions for a larger-scale crisis later on (Holling and Meffe 1996). The crisis can be both ecological and political; preserving the status quo politically often leads to organizational and political brittleness, as well as to ecological brittleness (Gunderson et al. 1995a). [p. 142]

“Response without experience” is a frequently seen reaction to crisis. It may result in a series of policy responses, including that of no effective response. Alternatively, it can lead to institutional learning or learning of the transformational type (Chapter 3). If the crisis is a true “surprise” (Holling 1986), then the institution will have no previous experience with it. Or the crisis may have been predictable but be of a magnitude that had never been experienced in that area.  [….]

If the memory of the experience provides a context for the modification of management policy and rules, the institution can act adaptively to deal with the crisis. The preferred response is to deal with the crisis while it is still a small disturbance at a lower level in the panarchy, and not a full-blown, higher-level crisis (Gunderson et al. 1995, 1997; Holling et al. 1998).

The mechanism for institutional learning, as for any learning, is trial and error. If this trial-and-error learning takes place as active learning (Hilborn 1992) and deliberately uses management policies as experiments from which to learn, then we have the basics of adaptive management (Holling 1978; Walters 1986; Lee 1993). [p. 143]

This view of panarchy is of social-ecological systems, where not only natural systems “learn” and remember”, but human systems can also “learn” and “remember”.  The larger and slower cycles can be retained either by elders or by institutions have experienced regime shifts multiple times within their lifetimes.