Choosing topics for a Systems Thinking Ontario session, it seems as though the term “Normal Accidents” was not one familiar to many, particularly those who were not old enough to recall popularization coinciding with the 1979 movie The China Syndrome.  The interest then on High Reliability Organizations would also be news to most of our usual attendees.  Thus, a session based on readings was announced ….

Have we learned from brushes with disaster, or have we become complacent about complexities in everyday life?

On March 28, 1979, an accident with a nuclear reactor occurred at Three Mile Island, Pennsylvania. Twelve days earlier, an Academy Awards winning film The China Syndrome had opened with a story fictionalized from a 1975 fire at a nuclear plant in Brown’s Ferry, Alabama, raising public awareness of an issue. For a Presidential Commission on the Accident at Three Mile Island, sociologist Charles Perrow contributed organizational analysis report. On a sabbatical to the Center for Advanced Study in the Behavioral Sciences in 1981-1982, that report expanded to include other high-risk systems, becoming the Normal Accidents book, published in 1984.

In the 1990s, a group at Berkeley initiated by Todd LaPorte noticed some high-hazard organizations who able to consistently manage risks to be failure-free. The organizations included the (i) Air Traffic Control System (FAA); (ii) Electric Operations and Power Generations Departments (Pacific Gas and Electric); and (ii) peacetime flight operations in the U.S. Navy. These cases were studies as High Reliability Organizations.

Many of the researchers continue to meet in the Center for Catastrophic Risk Management (CCRM). In the study of complexity, Ian Mitroff has labelled some situations as wicked messes.

This Systems Thinking Ontario session was led as a discussion group by David Ing. A short introduction was provided. Participants were then encouraged to contribute their impressions of the pre-readings, relate their experiences and/or ask questions. 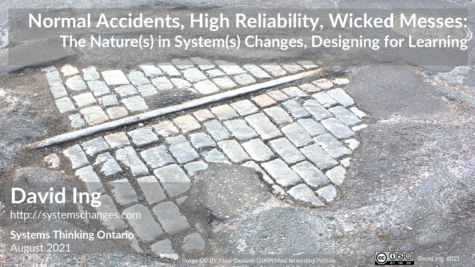