The October 2018 acquisition of Red Hat by IBM gives me hope.  Both IBM and Red Hat have been champions in promoting open sourcing behaviours.

Open sourcing is an open innovation behaviour related to, but distinct from, open source as licensing.  [Ing (2017) chap. 1, p. 1].

The label of open sourcing frames ongoing ways that organizations and individuals conduct themselves with others through continually sharing artifacts and practices of mutual benefit. The label of private sourcing frames the contrasting and more traditional ways that business organizations and allied partners develop and keep artifacts and practices to themselves.  [Ing (2017) sec. 1.2, p. 5].

This deal continues a socio-economic trajectory by IBM …

IBM’s 2018 acquisition of Red Hat can be compared with the 2009 IBM withdrawal of a $7 billion offer for Sun Microsystems. That was followed immediately by an announcement of Oracle to buy Sun for $7.4 billion. Years later, it was revealed in court that “Oracle didn’t buy Sun just to sue Google but to keep it away from IBM”.

[Oracle CEO Safra Catz] explained that Oracle bought Sun because so much of Oracle’s own product was based on Sun’s Java, and they were concerned about what would happen if someone else acquired Sun.

Oracle: Did you buy Sun because you wanted to file a copyright lawsuit against Google?

By someone else, she later clarified, she meant that Oracle “was afraid” IBM would buy Sun [Bort (2016)].

For Oracle, their acquisition was a financial play, with Larry Ellison in 2012 declaring that “Sun Buy Paid for Itself, Now We Crush IBM“.  In the lawsuits brought by Oracle against Google, Larry Page said that “a lack of cooperation between tech partners was holding back progress”.

Page blamed a “focus on negativity and zero-sum games” for the industry’s failure to achieve its full potential.  [….]

Page named the tech giant Oracle as one of the roadblocks to faster progress. “Money is more important to them” than having any kind of cooperation, he said [Rushe (2013)].

In December 2016, Oracle was reported to have ramped up audits of Java customers, chasing them for payment, six years after open sourcing had effectively ended.  By September 2017, an industry analyst declared that “Oracle Finally Killed Sun“.

With IBM and Red Hat, philosophies on open sourcing are organizationally better aligned.  Red Hat and IBM started an alliance on enterprise solution in 1999 on x86-based servers, later extended to POWER and z Systems.  By 2009, an industry consensus viewed that “in the long run, Red Hat will have to be subsumed into a large company — most likely IBM” [Dignan (2009)].  In the open source ecosystem, the IBM and Red Hat have both taken leadership positions, amongst other companies playing mostly to a lesser degree in the same field.

The deal is a good fit for many reasons ….

Oracle has to hate this deal. Oracle’s Linux (the kernel part) is based on Red Hat. This will definitely cramp Oracle’s style. Most cloud providers resell Red Hat software, so now IBM will be getting money on their business. IBM could be in the position Microsoft has been for the last 30 years. For every PC made Microsoft got money.

Reviewing history at IBM, this company has a long history of acquisitions that have been successful.  Following a counterfactual, IBM is absent on a 2016 list of “worst tech mergers and acquisitions“, that includes:

On the contrary, a 1998 article provides a case study of IBM and Lotus working together in post-merger integration.

What follows are some of the key tenets that I.B.M. followed.

This was reinforced in a 2009 interview with the IBM executive who oversaw $15 billion in acquisitions of 70-plus companies since 2004.

… successful integration requires taking the time to align the acquired company and the leadership of the parent company on the goals of the acquisition. That clarifies roles, responsibilities, and priorities, so the team can execute the vision of the merger. [Moni Miyashita, Managing Director of Mergers and Acquisitions Integration at IBM] explains that the integration needs to be “focused on value,” rather than on check lists such as suppliers, IT, and office space. [….]

To guide the process, IBM has dedicated “integration executives” whose full-time jobs are to lead the integration and make sure the activities and results of the merger stay on track. Miyashita says integration executives must have world-class project management skills, a deep understanding of the parent company, and enough clout to be effective and influential with all organizations.

[….] What makes a strong leader in this case? Miyashita says, “You need savvy business people who know how to relate to all levels of people.” A leader needs to ensure continuity of the acquired business, work with all groups supporting the integration into the parent company, be able to drive change with both companies, and execute the business case expectations. What’s more, a leader must be ready to lead.

As for performance management, Miyashita emphasizes it’s important to have formal tracking on the acquisition’s performance, so there’s clear accountability and attention to lessons learned. At IBM, this includes monthly checkpoints and more extensive quarterly reviews. “It’s a very formal process,” Miyashita says. “It’s important to have the focus from the top. Having the CEO and CFO focused on our acquisition success ripples down to every deal.”  [Huang (2009)]

Citing leadership and performance management as central to integration shouldn’t be surprising for managing any business.  Does the new world of commercial enterprises actively participating in open sourcing communities change anything?

What should IBM and Red Hat do to continue their track record of success? Three normative theories prescribe open innovation learning, extending practices that are already in place in both companies:

What would signal a successful integration of Red Hat into IBM?  Ex-post validation would require diligence in measuring (supporting or disproving) three descriptive theories on open sourcing while private sourcing:

The above theories aren’t meant to suggest that other theories couldn’t be built.  Multi-paradigm theory building leads to exploring alternative explanations and prescriptions to phenomena.

Practically, open sourcing while private sourcing has proven to be a viable way of doing business since the mid-2000s.  The IBM acquisition of Red Hat has been anticipated as an eventuality by many, yet hasn’t been appreciated in the frame of open innovation learning. 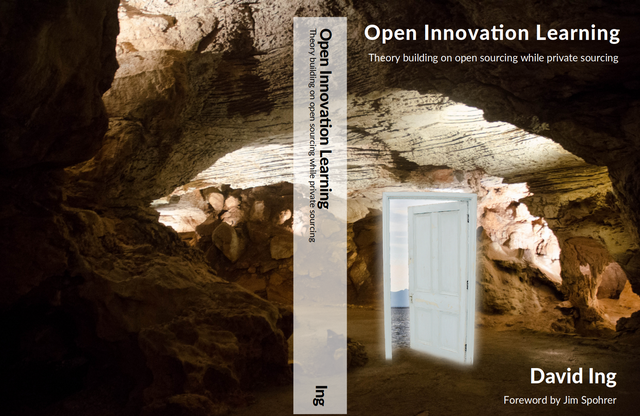