Gregory Bateson was consulting on questions associated with schizophrenia and communications, that expanded into a broader theory of double binds.  Along the way, he developed an appreciation for techniques amongst alcoholics where the twelve steps of Alcoholics Anonymous were leading to a more correct epistemology.

Before pursuing studies in systems sciences, Gary Metcalf was in practice with an earlier career in family therapy.  He explained how techniques and frameworks that he had previously applied became enriched with the deeper understanding of systems thinking, and a history of science associated with the double bind.

Gary provided some slides to guide the discussion.

Is there a pattern where you see a system is stuck? In the 1960s-1970s, anthropologist Gregory Bateson was working with cases of schizophrenia and alcoholism, leading to the development of systems theories on double-binds.

In the Bateson (1971) article, a systems theory was built to explain why the 12 step program from Alcoholics Anonymous seemed to work.

Bill W., the co-founder of Alcoholics Anonymous, himself an alcoholic, cut through all this mythology of conflict in the very first of the famous “Twelve Steps” of A.A. [….]

In sum, I shall argue that the “sobriety” of the alcoholic is characterized by an unusually disastrous variant of the Cartesian dualism, the division be- tween Mind and Matter, or, in this case, between conscious will, or “self,” and the remainder of the personality. Bill W.’s stroke of genius was to break up with the first “step” the structuring of this dualism.

Philosophically viewed, this first step is not a surrender; it is simply a change in epistemology, a change in how to know about the personality-in- the-world. And, notably, the change is from an incorrect to a more correct epistemology. [Bateson 1971, p. 3]

For those who are areligious, AA Agnostica provides “A Collection of Alternative 12 Steps“. Nearby to us, there is an AA Toronto Agnostics group.

This session will review the history of development of ideas that have now become canon in personal and group development.

Our guide will be Gary Metcalf, a former president of the International Federation for Systems Research and the International Society for the Systems Sciences. Gary came to systems theory after a prior career in family therapy. 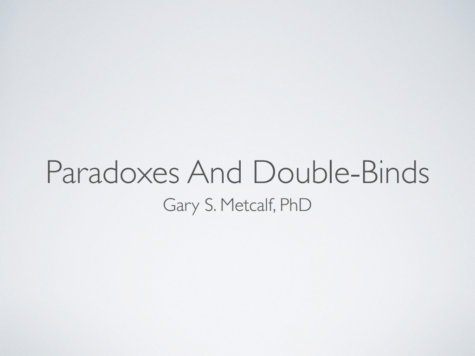