Russell Ackoff has a four-way categorization of systems that I’ve found useful, and often shows up in my presentations.  I’ve had a history of citing a 1996 article that is peer-reviewed.  However, when I first saw him in person, speaking with an overhead slide projector in 1997, I recalled a slightly different language.  I’ve now discovered an article that is consistent with my memory.

In 1996, Ackoff & Gharajedaghi wrote (in a language consistent with the Ackoff & Emery 1972 On Purposeful Systems book):

Whatever one considers a system to be — and there is considerable agreement as to what a system is — there are obviously different ways of classifying them.  For example, they can be classified by size, by discipline (physical, biological, psychological, and so on), by location, by function, and many other ways as well.  The choice of a classification scheme normally depends on its intended use.  For our purposes — examining the consequences of mismatching systems and their models — the critical classifying variable is purpose and purpose is a matter of choice.

Types of Systems and Models

There are three basic types of systems and models of them, and a meta-system:  one that contains all three types as parts of it (see Table 1):

(1) Deterministic:  systems and models in which neither the parts nor the whole are purposeful.

(2) Animated:  systems and models in which the whole is purposeful but the parts are not.

(3) Social:  systems and models in which both the parts and the whole are purposeful.

These three types of systems form a hierarchy in the following sense: animated systems have deterministic systems as their parts.  In addition, some of them can create and use deterministic systems, but not vice-versa.  Social systems have animated systems as their parts.  All three types of system are contained in ecological systems, some of whose parts are purposeful, but not the whole.  For example, Earth is an ecological sysetm that has no purpose of its own but contains social and animate systems that do, and deterministic systems that don’t.  [pp. 13-14]

There are many different ways of classifying systems. Different classifications have different uses. We have found the one we present here to be the most useful for understanding the poor performances of social systems. Since we believe choice (and purposeful behavior which derives from it) is at the heart of human and social development our classification depends on whether the essential parts of a system or the whole can display choice and, therefore, have purposes. This concern yields the four types of system shown in Table 1.

Significant continuities exist as we come down the Table and each category contains a variety of systems with important differences between them. [footnote 2] It is important to note that there is a hierarchical relationship among the four categories shown in Table 1: each type has or uses parts that are systems of the type above it in Table 1. Nevertheless, each type has a distinct emergent characteristic that distinguishes it from all other system types.  [pp. 2-3]

[footnote 2] The classification can be elaborated by distinguishing between choice of ends and choice of means, but doing so would take us beyond the scope of this paper.

Further down in the article is Table 2 (which is not explicitly mentioned in the body text, but is essentially covered in the rest of the article).

Historically, animate systems have often been treated as if they were nothing but complicated deterministic systems. Mechanistic biology dominated biology for centuries. [p. 5]

This summarizes some of the distinctions between metaphorically-oriented descriptions, and the rigours of modelling.  When an individual uses a type of model different from the type of system (in the context of purposefulness and choice), there can be a mismatch.

Since Ackoff was still alive and publishing in 2003, the 1996 version is an artifact that is journal-reviewed, but perhaps not the definitive word.  This unreviewed paper reflects a lag between scientific discovery and publication of the findings.

Footnote: My diary record says that I heard Russell Ackoff lecture in Natick, MA in a hotel venue on September 19, 1997. I seem to recall that the lecture was hosted by the Institute of Management Sciences from Boston, which was different from the TIMS/ORSA organization that today is called INFORMS.

Russell L. Ackoff and Jamshid Gharajedaghi (2003), “On the mismatch between systems and their models”, Ackoff Center Weblog at http://ackoffcenter.blogs.com/ackoff_center_weblog/2003/08/on_the_mismatch.html 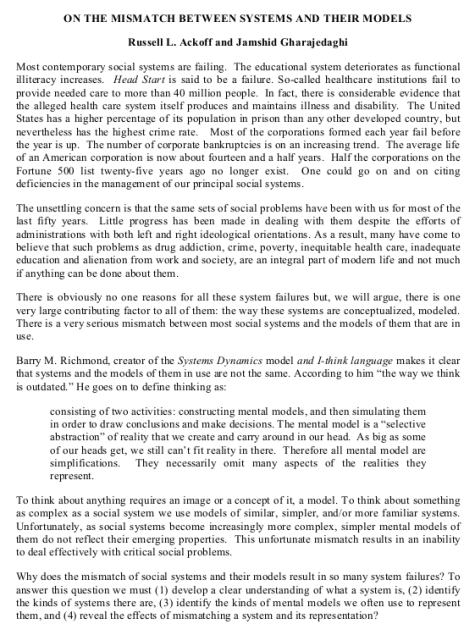