While some of my activity on the Internet is recreational, I continue to play with web tools to learn about the ever-evolving technology.  While the average person has become comfortable with e-mail, web feeds are still pretty much a mystery to many.  The RSS and Atom specifications first used by newswires has become the principal form of web syndication for blogs and social media.

I’ve recently rearranged my pattern of web use (again).  To encourage readers to think about how they use the Internet, let me pose four questions.

With the way that technology continues to evolve, the specific web applications may change … but the pattern should remain the same.

1. Which principles on web content do I have in mind?

My attitude is reflected in two ideas:  (a) open content with attribution, and (b) open platforms with interoperability.

(a) Open content with attribution reflects that I like to share my learning with other people.   Posting the content on the Internet improves access and distribution.  I understand the workings of copyright — there’s a Creative Commons license on this blog — which means that I retain ownership of my words, on the condition that if someone wants to formally cite the work, he or she should cite me as the source.  I’m not an author who makes his living at writing, so simple acknowledgement is normally sufficient.

(b) Open platforms with interoperability means that I don’t want my content inappropriately trapped in places inaccessible to others.  I appreciate instances when content should remain private, respecting the needs of others and/or commercial conditions, but secrecy should be the exception rather than the rule.  The content should flow freely (i.e. free as in liberty), rather than having to stumble through technological obstacles.

With these principles in mind, I’m reforming the way that I interact on the web.  Here’s a diagram (linked to another page in an interactive map). 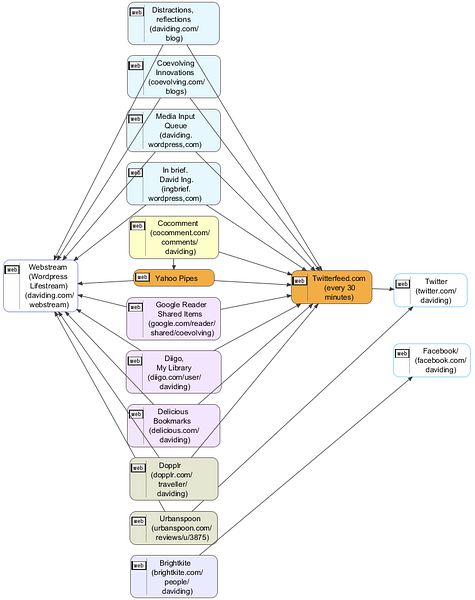 I write content on four blogs, all using WordPress software (which is open source and free).  Distractions, reflections has become a photoblog of my travels, on my personal domain.  Coevolving Innovations is my professional blog, on a separate domain that I had originally started with colleagues.  The Media Input Queue is a trail of MP3 audio lectures and talks that I’ve found worth remembering.   I’ve recently started In Brief as a microblog to retain short messages based on the new P2 theme.  These last two blogs are  on the free hosting provided by wordpress.com, as I expect their volume to be relatively light, and I can observe how new features are added to the technology by professionals.

When I leave responses on the blogs of others, a Firefox plugin ensures that my words are tracked on cocomment.com.  These comments become available as a feed — just as with my blog posts.

I bookmark items in three ways.  Topical items, such as newspaper and magazine articles, are saved with the bookmarklet to my Google Reader Shared Items, with a snippet and a personal comment.  Research content is saved in my Diigo library, enabling colleagues to subscribe (e.g.via e-mail) according to interests.  Other web content is saved in my Delicious bookmarks, normally without comment.

In the hopes of coincidentally meeting friends and colleagues in cities where I’m destined, I post my upcoming trips on Dopplr.  Since I have an appreciation for varieties of food, I reviews on Urbanspoon (who reciprocate by providing links back to my photoblog).  To learn about the emerging location-based technologies, I’ve been regularly updating landmarks and visits on Brightkite.

I don’t post this content just on my own web site, because much of it naturally belongs to communities that won’t all coincide (e.g. people who listen to podcasts aren’t necessary the same people with extensive business travel).  Through web standards established on the Internet, it’s relatively easy to pull content from one place to the other.  I’ve recently created a consolidate view as a webstream on my personal domain — I don’t call it a lifestream, as I do have a life outside of the Internet! — taking advantage of the Lifestream plugin for WordPress.  Every 30 minutes, Twitterfeed sends out notifications of these web activities to my Twitter account (with the promise of some notifications being sent out immediately with PubSubHub and RSScloud coming soon).  With the format of some feeds not being exactly as I’ve wanted, I’ve been hacking Yahoo Pipes to beautify some feeds.

I’ve had ups and downs on the amount of content that I put on Facebook.  I used to change the status message once per day; then I increased the number of feeds imported it, and now have cut back to a minimum again.  My primary use of Facebook messages is — since I travel so much — to let my family and friends know which city I’m in.  If anyone really wants to know more, all of the other web content is available on the open Internet.

3. Why have I recently changed my use?

While I’ve now experienced blogging for a few years, microblogging — known by most people as tweeting or twittering — is something new to understand.  The medium can be noisy, but it helps me keep tabs on people with whom I have a real connection.  The most recent changes in pattern are (a) separating microblog content from medium, and (b) consolidating content into a webstream.

(a) Separating microblog content from medium means that I’m using Twitter as one channel for communication, but it’s not the only channel.  Although some people use it as a one-to-many broadcast medium, I don’t see Twitter as a conversational platform and prefer either one-to-one or one-to-few (i) instant messaging, (ii) e-mail, or (iii) teleconferences.  I publish content on the web for others to learn, not as a recreational agenda.  I want to increase the ratio of signal-to-noise in Twitter.  I scan through Twitter messages the way that I scan through a newspaper: I can speed-read through headlines, and sometimes find ideas that I wouldn’t naturally seek.  Serendipity has advantages.

(b) Consolidating content into a webstream is a way of evolving content to be more person-centric, over topic-centric.  I don’t know why any particular person would be interested in following my webstream, but it’s technologically feasible to do so.  This is part of the ongoing experiment that is social media.  I’ve also set up accounts on Profilactic and on Lifestream.fm, as a way of benchmarking the technology.

I’ve been a fan of Friendfeed over the last year, as the above two patterns were satisfied by that technology.  However, there’s been some question as the future of Friendfeed since the acquisition of the company by Facebook has halted development.  The platform is still available, and its life may have actually been extended since fewer people using Friendfeed reduces the load.  Still, the uncertainty is discouraging.  I’ve just noticed an OpenFF group has formed, looking into an open source version of Friendfeed, and will monitor their progress.

4. What consideration should web users have for their content?

Based on the above demonstration of web technologies, people active on the Internet should think about (a) what content is being put on the web, and (b) where is that content going.

(a) What content is being put on the web? I’ve previously written that individuals should take control of their web personas, because it will be shaped passively unless active management is undertaken.  Just entering your own name (or aliases) into a search engine may produce a profile that may or may not be appreciated.  The division between business personas and personal personas has fallen.  It’s almost impossible to remain invisible in the Internet age, so each person will be judged — appropriately or inappropriately — by the content that he or she creates (or has had created about him or her).

(b) Where is that content going? Almost all web technologies have adopted web feeds as foundational technologies, so the original venue for content may be only a starting point for its further distribution and reuse.  This has both upsides and cautions.  The upside is that good content is readily accessible to interested audiences, and can aid in the development of social capital.  The caution rests with traceability of the ideas back to the originator.  Intellectual capital is mobile, and some effort is required to maintain claims on personal works.