The Focus section of the Globe & Mail newspaper this past weekend centered on happiness. The Authentic Happiness Inventory Questionnaire, developed five years ago by Christopher Peterson (from the U. of Michigan) was reproduced as 24 questions in the newspaper. Matthew Trevisan reports that …

thousands of people have taken the test online, with an average score of 3.24 out of five. Pretty good, considering that most of the people who take it are what Prof. Peterson calls “seekers.”

“I mean, if you are happy as a clam, why the heck would you go to a positive psychology survey?”

Well, I’m a researcher, so I was just curious as to how I would score. Since I hate doing arithmetic, I found that the questionnaire is available on a University of Pennsylvania site by Martin Seligman. (You can register a userid there, to add to the statistics, and take the test). It turns out that I score 4.33, on a 5-point scale. 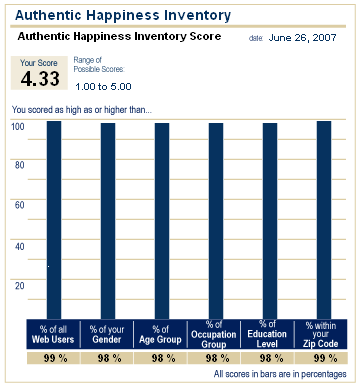 This puts me in a position better than 98% of people taking the test, in every category. But what does this mean?

In a 2003 newsletter by Seligman and Royzman is the most concise description of Authentic Happiness.

Our theory holds that there are three distinct kinds of happiness:

The first two are subjective, but the third is at least partly objective and lodges in belonging to and serving what is larger and more worthwhile than the just the self’s pleasures and desires.

In this way, Authentic Happiness synthesizes all three traditions:

To top it off, Authentic Happiness further allows for the “Full Life,” a life that satisfies all three criteria of happiness.

Reading the full article, (a) I have more pleasure than pain in my life — maybe from a happy childhood in Muskoka, and now a good lifestyle living in Toronto; (b) I’m “getting what I want” out of life (which is clearly subjective, and not necessarily what others might like); and (c) I feel that I’m objectively making a difference in the world, both in my day job and in my private life.

The newpaper feature took a larger perspective on happiness. Mark Kingwell wrote about how happiness isn’t particularly well analyzed by economists, reinforcing its reputation as the dismal science. Embedded in another story by Charles Montgomery on the “urban happiness movement in Bogota”, the change in the city resulting from the efforts of ex-mayor Enrique PeÃ±alosa were reviewed.

So what makes societies happy? The past decade has seen an explosion in research aiming to answer that question, and there’s good news for people in places like Bogota: Feelings of well-being are determined as much by status and social connectedness as by income. Richer people are happier than poor people, but societies with wider income gaps are less happy on the whole. People who interact more with friends, family and neighbours are happier than those who don’t.

And what makes people most unhappy? Not work, but commuting to work.

These are the concepts that guided Mr. PeÃ±alosa’s car-bashing campaign.

“There are a few things we can agree on about happiness,” he says. “You need to fulfill your potential as a human being. You need to walk. You need to be with other people. Most of all, you need to not feel inferior. When you talk about these things, designing a city can be a very powerful means to generate happiness.”

The full article makes me want to visit Bogota (or maybe influence planning a conference there).

Mr. PeÃ±alosa offers an eager “Como le va?” – how’s it going – to a pair of dust-caked labourers cruising past on the bike path. He is clearly campaigning: Every commute is a chance to remind Bogotans that their bike routes were his idea, and their parks his doing. But he is also a preacher spreading the word.

“See those guys? Before, cyclists were seen as just a nuisance. They were the poorest of the poor,” he says. “Now, they have respect. So bikeways are important … [because] they show that a citizen on a $30 bike is equally important to someone driving in a $30,000 car.”

This principle of equity led him to hand road space over to public transit and pedestrian areas – a way of making private space public again.

So, not having a regular commute to an office since the early 1990s has been a good contributor to my happiness. What would make me happier? Well, I’m not spending enough time riding my bicycles!