The Memletics Learning Styles Questionnaire on http://learning-styles-online.com is cited as created in 2004, based on the Memletics Accelerated Learning Manual, by Sean Whiteley (Advanogy, 2003).  With neither memletics.com nor advanogy.com domains currently online, the ebook has been reproduced on scribd.com by Maria McConkey.  Whiteley bases his model on “brain regions”. … we first look at the basis of learning styles and their influence on learning.  [….] We then look at each of the Memletic Styles in turn.  In summary, these are:

Why Styles? Understand the basis of learning styles

Your learning styles have more influence than you may realize. Your preferred styles guide the way you learn. They also change the way you internally represent experiences, the way you recall information, and even the words you choose. We explore more of these features in this chapter. Research shows us that each learning style uses different parts of the brain. By involving more of the brain during learning, we remember more of what we learn. Researchers using brain-imaging technologies have been able to find out the key areas of the brain responsible for each learning style. Refer to the “Brain Regions” diagram and read the following overview:

I’ve based the Memletic Styles on two brain models you may have heard about. The first is “Multiple Intelligences” by Howard Gardner. I’ve broadened his model and made it more applicable to learning. You may know the other model as “VAK,” or the Visual-Auditory-Kinesthetic model. Neuro-Linguistic Programming (NLP) books also describe this model as “modality preferences”.

As much as I would like to follow up on continuing research, the last mention that I can find about Memletics is a cached version on archive.org from 2008.

My learning styles inventory as assessed from http://learning-styles-online.com sees my highest scores as logical and solitary.  However, a closer interpretation says (i) logical, aural and verbal dominate over visual (slightly) and physical (completely), and (ii) solitary is preferred (but may not dominate) over social.  If I am to have a learning style that includes listening and talking, I would expect that to happen socially! 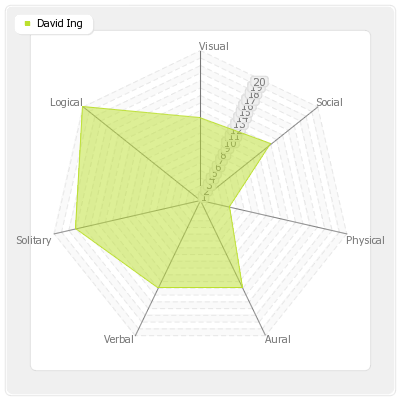 There’s a glitzier Flash-based Education Nation Learner Profile Assessment hosted by the University of Phoenix using the same seven categories as Memletics.  The 21 questions are phrased differently (shorter than 70 by Memletics), and the research sources is not cited, so the validity of this assessment seems weaker.  The primacy of verbal and aural over logical doesn’t feel right. 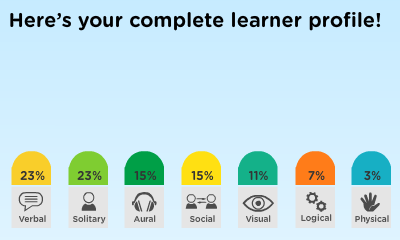 In the Perceptual Modality Preference Survey on learningstyles.org, I sense information most as a print learner and a aural (listening) learner.  I’m unlikely to learn by smelling or sniffing. 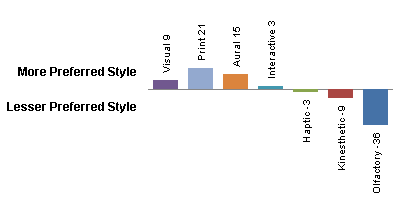 The C.I.T.E. Learning Styles Instrument from the Center for Innovative Teaching Experiences at the Murdoch Teachers Center in Wichita, Kansas, based on (Babich, Burdine, Albright, and Randol, 1976) had better academic source (pre-Howard Gardner), but is available only administered on paper, and not electronically.  A thesis by L. Harden (University of South Florida, 1992) says “use of the CITE learning style instrument … should be discontinued since no positive correlations were found with this instrument”.

Along the way, I noticed a description of learning strategies (not styles) as serialist or holist, originating from Gordon Pask, described by James Atherton as (2011) at http://www.learningandteaching.info/learning/pask.htm .

The controversy over learning styles as a topic is well described by Guy W. Wallace, “Why Is the Research on Learning Styles Still Being Dismissed by Some Learning Leaders and Practitioners?”,  November 2011, ACM eLearn Magazine at http://elearnmag.acm.org/featured.cfm?aid=2070611.