Dialogic design and systems thinking can be closely related, although not everyone appreciates the ties.  For the Design with Dialogue community, at the invitation of Peter Jones, we jointly organized a workshop based on some ideas that I had previously brought together in teaching in Finland.  I’ve posted the slides — both with builds and as printable — over on the Coevolving Commons.  For people who weren’t there, I can provide an outline of the activities of the three hours.

After introducing ourselves in the circle, and speaking about dialogues that each of us might be interested in pursuing, I provided an explanation of the Map of Ignorance, as described in the Curriculum on Medical Ignorance by Witte, Kerwin and Witte in the University of Arizona College of Medicine.  We walked through the interpretation of Unknown Knowns, Known Unknowns, and Errors.

Taboos and denials typically don’t enter a dialogue unless the facilitator ensures that they do.

Questions of knowledge bring us to conceptions of science, related to scientific revolutions, whereby a quick outline of Thomas Kuhn and paradigm shifts was described.  This led to a discussion of mainstream science and post-normal science, following the work of Jerome Ravetz.  The combination of systems uncertainty and decision stakes might lead us to approaches based on applied science (e.g. engineering), professional consultancy (e.g. scientists) or post-normal science (e.g. dialogic design) 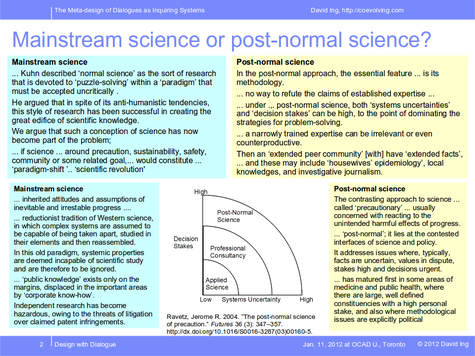 Attendees broke out into six groups.  From the predispositions individuals had outlined in the circle introductions, each group quickly chose a dialogue of focus for design.  They were asked to (i) create a quick map of ignorance for the topic, and (ii) discuss how the dialogue might be approached in the frame of mainstream science or post-normal science.

Returning to the circle, the second set of explanations was around the design of inquiring systems, as originally developed by C. West Churchman, with more concrete descriptions by Mitroff and Linstone.  Stories helped to differentiate four ways of knowing, as (i) inductive-consensual, (ii) analytic deductive, (iii) multiple realities, and (iv) dialectic. 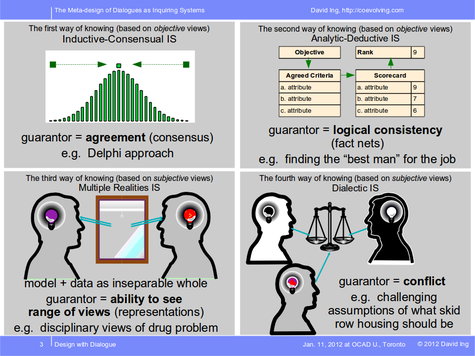 A fifth way of knowing, a multiple perspectives systems approach, was presented as a challenge, sweeping in the four other inquiring systems.  For some attendees who were interested in business applications, I mentioned that Vince Barabba had described a multiple perspectives systems approach in Meeting of the Minds, and has recently published a new book The Decision Loom. 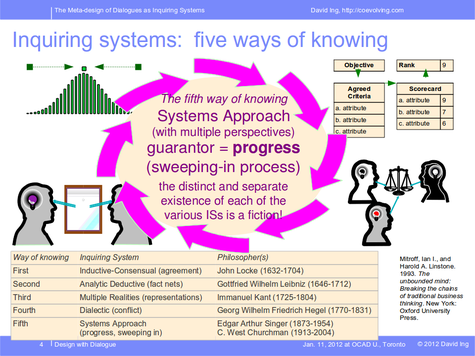 Participants returned to their groups to discuss what types of inquiring system(s) might be appropriate for the dialogues they were designing.

We closed down the Design with Dialogue session a little bit later than usual, as all groups seemed to want to continue working.  There was a question as whether we had covered all of systems thinking or part of it.  Inquiring systems are only one part of the larger body of knowledge in systems thinking.  Perhaps we’ll look to schedule some more systems thinking sessions relevant to dialogue designers in the future.