I’ve verbally relayed high points from presentations that I heard in the IBM Technology Leadership Exchange last March, about the Cell processor. This is an 8-way processor that has the computing power of a mid-range IBM server. It’s also the key component in Sony PlayStation 3, which is famous for its short supply this past Christmas.

I was reminded of this when I was in the basement, and my son Noah asked what the WEP key on our wireless router is. He was lent a PlayStation Portable by his friend, and it supports wireless Internet access. 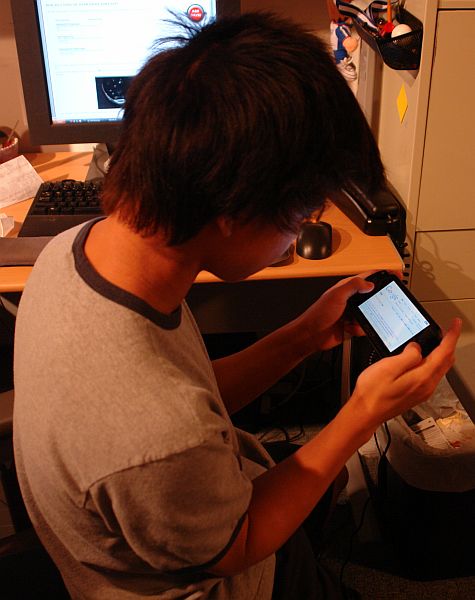 I gave Noah the WEP key. You can see in the snapshot that, within a few minutes, he had Google on his PSP. Surfing the web works fine … although the lack of a keyboard makes entering text about as annoying as the 12-digit interface of a mobile phone.

I think that we’re at turning point in home computing. The PlayStation 3 is not just a video console, it’s really a network server. It doesn’t just play games, it’s an open platform that loads other operating systems â€” Linux, in particularly (with Gentoo and Ubuntu varieties already proven to work). Infoworld says “The PlayStation 3 could be aptly dubbed The Work-and-PlayStation 3” with the computing power available.

As I’ve been reading more, I’ve come to realize that Sony doesn’t want to just put one Cell processor in your home, they want to put in multiple appliances. The BBC says …

Sony hopes to put Cells in televisions, kitchen appliances and anywhere that could use any sort of computer chip.

Each Cell will be linked to the others, creating a vast home network of computing power.

Resources of the Cells across the house can be pooled to provide more power, and the links can also be used to enable devices to talk to each other, so that you can programme your microwave from your TV, for example.

After surfing Google, Noah surfed over to Adam’s blog. It’s technically possible for him to post a comment from the PSP, just as he would from a PC. As a video game, the computing power of the PSP is limited to a maximum 4 GB of flash memory. The PS3 doesn’t have such limitations.

I have a Windows-based open source web server in our basement, and I think that I won’t be getting another one in the future. I admit that it’s uncommon for a person to have his/her own web server, but the PS3 could change that. The hardware is there, the software is available (and mostly free) … so all it requires is a few motivated individuals to start up local businesses. Enterpreneurism, anyone?