I normally focus on industrial and service businesses, but recently headlines on rising food prices have me looking into agricultural businesses. Here some statistics to ponder: the world’s top 4 crops — wheat, corn, rice and barley — weigh more than the next 26 crops combined. 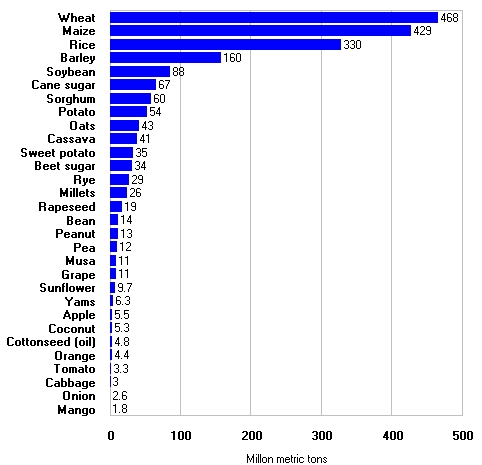 Our diet really is quite limited in scope, according to Cordain (1999):

The number of plant species which nourish humanity is remarkably limited. Most of the 195,000 species of flowering plants produce edible parts which could be utilized by man; however less than 0.1% or fewer than 300 species are used for food. Approximately 17 plant species provide 90% of mankind’s food supply, of which cereal grains supply far and away the greatest percentage ….

Eight cereal grains: wheat, maize, rice, barley, sorghum, oats, rye, and millet provide 56% of the food energy and 50% of the protein consumed on earth. Three cereals: wheat, maize and rice together comprise at least 75% of the world’s grain production. It is clear that humanity has become dependent upon cereal grains for the majority of its food supply. As Mangelsdorf has pointed out, ‘cereal grains literally stand between mankind and starvation’; …. [pp. 20-21]

Where are these cereal grains coming from? Here’s a summary developed by Wayne Roberts (whose article led me to Cordain):

Roberts says that there are disincentives to farmers to switch to less popular crops:

The fact that barn-raised livestock consumes a lot of wheat and corn does not have to mean that buckwheat, millet, oats, sorghum, teff, rye, spelt, amaranth and chia, all more nutrient-rich and easier on the earth than the big three, get shunted to the back acre.

Nor does it have to mean the same for potatoes (not the ones bred for french fry and potato chip production, but sweet potatoes, cassava, yams and other root crops) that match grains for nutrients.

Once farmers learn to grow these less common grains and tubers, they can be harvested for the same or less cost than the Big Three. And since they’re not used to feed cattle or cars, these’s less non-human demand to make them pricey.

Low prices and high convenience served as the modern-day Trojan Horse that allowed major agribusiness firms to take cheap U.S.-grown foods global. But low prices can no longer attract enough crop to meet demand. The original design of the fat-of-the-land high meat, high carb, high sugar system, after all, was for a world of 3 billion people, not 6 billion soon heading to 9.

The basic infrastructure of monopolized and centralized trading companies, processors, fast food chains and supermarkets is still intact. So is widespread lack of awareness of alternative tastes and crop possibilities. [p. 16]

Cordain seems to advocate eating less cereal grain, (in favour of other plants).

From an evolutionary perspective, humanity’s adoption of agriculture, and hence cereal grain consumption, is a relatively recent phenomenon. … [This] event occurred in most parts of the world between 5,500 and 10,000 years ago. Cereal grains represent a biologically novel food for mankind, consequently there is considerable genetic discordance between this staple food, and the foods to which our species is genetically adapted.

Cereal grains lack a number of nutrients which are essential for human health and well-being; additionally they contain numerous vitamins and minerals with low biological availability. [….] Because primates and hominids evolved in the tropical forest,wherein dicotyledonous plants prevailed, the human physiology has virtually no evolutionary experience with monocotyledonous cereal grains, and hence very little adaptive response to a food group which now represents the staple food for many of the world’s peoples. [pp. 58-59]

Since human evolution isn’t going rapidly change the foods that we can digest, perhaps the balance of foods to be grown needs to be rethought.