Recordings of the book launch proceedings are now available as a web video playlist, and downloadable files.

Open Innovation Learning: Theory building on open sourcing while private sourcing was first released as a perfect bound softcopy and an open access PDF in November 2017.  In February 2018, the ePub and Mobi editions were put online.

On February 21, a special session of Systems Thinking Ontario invited friends and colleagues to celebrate the publication that had taken most of the past three years in full-time research and writing.  The recordings are available in 4 parts:

With family, friends and colleagues attending, this was one of the most memorable evenings of my life.

As the official host of Systems Thinking Ontario at OCADU University, Peter Jones served as the master of ceremonies.

The files are also available for download onto a mobile device.

Peter explained the Nordic tradition of presenting dissertation research in a venue open to the public. While this gathering was not so formal, my participation with Systems Thinking Ontario and OCAD University made this assembly a natural session.

2. Self-introductions by attendees in the audience

The tradition at Systems Thinking Ontario meetings sees everyone in the room introducing himself or herself, and describing the context for coming to the meeting.

In the interest of completeness, an audio artifact is available (without video tracking).

3. Highlights of the book, presented by David Ing

Most people interested in finding out about the book will be better off first listening to a presentation of highlights.

The presentation slides are available on the Coevolving Commons.

This book was written primarily as a reference work.  The body of the text aims to be scientific; the appendices with case studies is twice as long as the main body; and the footnotes are voluminous.  In a verbal presentation, it seems as though most listeners were able to comprehend the general direction, sparking some ideas for further discussion.

4. Commentary by Stephen Perelgut and Tim Lloyd, followed by questions from the audience

The conventional structure for a Systems Thinking Ontario meeting is as a dialectic.  Thus, one or two commenters give their personal impressions, as a way of encouraging further conversation.

Stephen Perelgut confirmed the history of open sourcing while private sourcing at IBM in the case study period of 2001-2011, and added that this practice has largely continued to the present day.  Tim Lloyd spoke with some notes prepared in advance, discussing the research in context of Systems Thinking Ontario meetings, with a light roasting for the friendly audience.  As a panel, we took questions from the audience at large.

With the formal part of the meeting completed, we adjourned for refreshments. Since the preferred form of the book is electronic, I signed postcards for friends who wanted a souvenir. 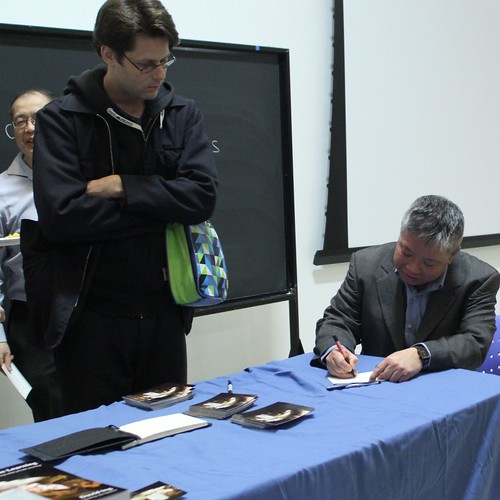 The formal launch of this book is a major personal milestone in my life. The act of writing led me to shift the philosophy underlying the systems sciences that I have studied since 1998. I expect that there’s still research work to come, but the depth and volume in the future is unlikely to approach this heft.