The science, management and engineering of service systems is associated with a call for T-shaped people. The most recent emphasis is on T-shaped professionals, which was preceded by T-shaped skills, with linkages back to a 1990 study on hybrid managers. Some insight can be gained by working backwards through the nuanced terms.

The 2008 Cambridge (IfM and IBM) report issues a challenge to universities for developing skills, and then seeks to enlist support from business and government.

Developing T-shaped professionals
Discipline-based education remains a vital role of modern universities. In order to close the skill gap, however, universities should also offer students the opportunity to gain qualifications in the interdisciplinary requirements of SSME. Such qualifications would equip graduates with the concepts and vocabulary to discuss the design and improvement of service systems with peers from other disciplines. Industry refers to these people as T-shaped professionals, who are deep problem solvers in their home discipline but also capable of interacting with and understanding specialists from a wide range of disciplines and functional areas.

Widely recognised SSME programmes would help ensure the availability of a large population of T-shaped professionals (from many home disciplines) with the ability to collaborate to create service innovations. SSME qualifications would indicate that these graduates could communicate with scientists, engineers, managers, designers, and many others involved in service systems. Graduates with SSME qualifications would be well prepared to ‘hit the ground running’, able to become immediately productive and make significant contributions when joining a service innovation project.

Support needed from business and government
Establishing SSME qualifications is a challenging task. Interdisciplinary course development requires significant effort to develop because different faculty members might find it hard to work together sustainably over time. Educational innovations are vulnerable because they are often reliant on the efforts of one or two people. Interdisciplinary programmes are even harder to organise, and more expensive to initiate and maintain, than conventional ones. Rapid progress in the design and delivery of these programmes would require support and resources from business and government. [p. 11]

This isn’t nearly the first mention of the idea of T-shaped. Leonard-Barton (1995) provides a drawing of T-shaped skills, while describing the resistance of businesses to develop them.

The need for T-shaped skills surfaces anywhere problem solving is required across different deep functional knowledge bases or at the juncture of such deep knowledge with an application area. (See Figure 3-5). People possessing these skills are able to shape their knowledge to fit the problem at hand rather than insist that their problems appear in a particular, recognizable form. Given their wide experience in applying functional knowledge, they are capable of convergent, synergistic thinking. [p. 75] 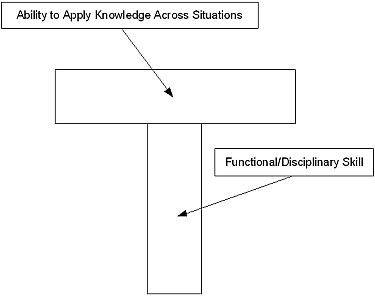 If people with T-shaped skills are an integral part of such an important competitive advantage, where do we find them? In most organizations, T-shaped skills are not created as a deliberate policy but emerge because individuals have been willing to risk a somewhat marginal career. Most formal organizational incentives encourage I-shaped skills — the deep functional experience represented by the T’s stem. As a result, the individual is driven ever deeper into his or her expertise, which the organization continually draws on and rewards. At the same time, the organization provides no clear career path for those who want to top off the stem with a broad range of applications — i.e. the crossbar. [p. 77]

As a supplement to individuals with T-shaped skills, Leonard-Barton also describes complementary roles in A-shaped skills and multilingual managers.

People with A-shaped skills. Although rare, some individuals embody technology fusion. T-shaped skill implies deep know-how within one discipline (the stem) and more superficial knowledge about how it interacts with others (the crossbar). Some people actually learn more than one discipline (although more than two is unlikely) and so have two disciplinary “legs” on which to stand. Usually such skills are acquired sequentially. […. In] environments where technology fusion is the norm, some individuals may become bilingual. [p. 77]

Multilingual Managers. Additional organizational glue in diverse creative groups is provided by managers, some of whom describe themselves as “schizophrenic” or “multilingual” — i.e. capable of operating in more than one specialized realm and perhaps utilizing more than on cognitive style. [p. 77-78]

These mid-1990s articles see a subtle shift in emphasis from T-shaped professionals from earlier research into T-shaped managers. This shift is consistent with the rise of knowledge-based professionals operating in communities of practice, in contrast to industrial age management supervision.

Although the figure of the T-shaped appears is explicitly diagrammed in Leonard-Barton (1995), her text cites an Iansiti (1993) study of R&D groups in system-focused companies, emphasizing skills within a team as a whole.

Based on a study of the R&D organizations of 12 mainframe computer companies … system-focused companies achieve the best product improvements in the shortest time and at the lowest cost. [p. 138]

What follows is a typical profile for a successful integration team. In general, the members are the foundation of a system-focused approach to R&D. They possess a T-shaped combination of skills: they are not only experts in specific technical areas but also intimately acquainted with the potential systemic impact of their particular tasks. On the one hand, they have a deep knowledge of a discipline like ceramic materials engineering, represented by the vertical stroke of the T. On the other hand, these ceramic specialists also know how their discipline interacts with others, such as polymer processing — the T’s horizontal top stroke. [p. 139]

Reading even earlier writings, Wordspy lists the earliest citation of the T-shaped people to David Guest in a 1991 article published in The Independent (London) in 1990. The core of that article reports on a 1990 study by the British Computer Society published by Palmer, linking back to Michael Earl at Oxford.

Hybrid managers are important. [….] The term was coined by Michael Earl, Director of OXIIM at Templeton College, Oxford. It arose as a result of a number of pieces of research that he and his colleagues had been undertaking. They noticed that in all the significant cases of successful implementation of information technology for competitive advantage or for achieving major change in organizations, there seemed to be a person at the heart of the development who displayed certain experience and characteristics. These were: an understanding of the business and what was required within the business, combined with a technical competence that enabled them to understand what was required in technical terms, including the scope of what was being planned. In addition to this, they displayed two types of organizational skills. They knew how to get about the business, and this implied that they knew the business and the people around it well, and they knew how to get things done, possessing a set of excellent social skills — to listen, understand, negotiate and persuade. [p. 232]

While the focus is on hybrid managers, they work in the context of visionaries, impresarios and specialists.

It was also clear from these cases that hybrids were not operating in isolation. There were other important roles that were being performed by other people in conjunction with the hybrids. These roles were described as visionary, impresario and specialist. The visionary was normally the leader who conceived a particular idea for the use of IT in the business; it was that person who shared the vision with the hybrid, and the hybrid who took that vision, developed it and put it into action. The impresario was the provider of necessary resources and support to enable the hybrid to deliver what was required; this person was often the Information Systems Director. The specialist was the technical expert who was able to design and develop the specific system. [p. 232]

Presumably it’s not so difficult to find visionaries, impresarios and specialists, but it is difficult to find hybrid managers. As part of the 1990 study, the British Computer Society suggested that MBA programs were a good direction to broaden the skills of technical specialists.

We came to the conclusion that an excellent route for individuals to bridge the career move from their IT specialism, was part-time MBAs. This is a universally recognized qualification, and over 4000 places are available parttime (in many instances company-sponsored) each year within the UK. The BCS is now seeking to encourage this activity and beginning to do some investigation work to define the requirement. It does seem to be the basic MBA, but with some attempt to broaden the skills of the IT specialist. [p. 235]

Part-time MBA training, however, tends to be correlated with career progression from hands-on work to management supervision. Leonard-Barton (1995) cautions that a generalist without deep relevant knowledge in a function doesn’t have the requisite T-shape.

But creative problem solving requires us to manage between rewarding only deep functional knowledge and rewarding only application or integration skills. Iansiti found that the system-focused companies deliberately created T-shaped skills by carefully shaping individual careers to provide exposure. Of course, a risk is creating a class of generalists with no deep knowledge of any particular specialty but possessing only the crossbar of the T. [pp. 76-77]

The 2008 Cambridge IfM and IBM report suggests that the foundations for understanding service systems can be drawn from knowledge related to four resource clusters.

Resource clusters
The resources used to form service systems offer a useful starting point for the development of Service Science. They can be divided into four clusters:

The knowledge of service systems benefits from academic disciplines, which study some or all of the four resource clusters. The list is reproduced here as a table.

Perhaps the skills of a T-shaped professional — in an era of science, engineering and management of service systems — can be drawn from the two dimensions above.

In practice, there’s sufficient breadth within undergraduate and graduate studies to gain expertise in more than one discipline. Keeping the big picture in view suggests commonalities in the four resource clusters.