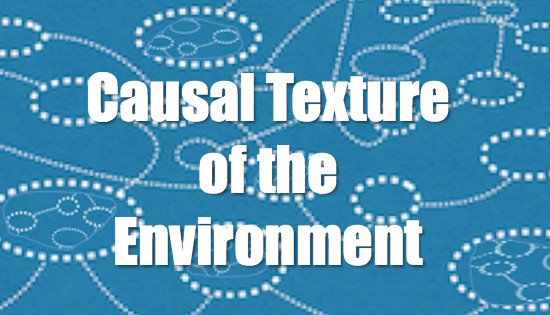 In this particular posting , I’m focusing in on one aspect of the work of Emery and Trist that they call the “causal texture” of the environment within which an organization operates. Here we get some insight into outside-in and inside-out thinking (as well as outside-out, and inside-in). I am specifically calling attention to this paper to set the stage in anticipation of my next posting on the ecosystems of enterprise.

Quoting from the paper:

“[A] comprehensive understanding of organizational behaviour requires some knowledge of each member of the following set, where L indicates some potentially lawful connection, and the suffix refers to the organization and the suffix to the environment:

Just for a bit of fun (!) let’s introduce the following graphic, that may prove to be useful in future discussions:

A key point here is the word ‘lawful’. The authors are trying to point out that there are very different systems of natural, psychological, (and artificial) laws that need to be considered for a full understanding of organizational situations. As they say “laws connecting parts of the environment to each other are often incommensurate with those connecting parts of the organization to each other, or even with those which govern the exchanges.”

The authors then proceed to lay out four types (steps) of causal texture:

It seems fairly clear that the world of the 21st Century is very much a type 4 (or “Step 4”) environment. In such a situation, characterized by many moving parts, we can often observe the emergence of some stabilizing force. Emery and Trist suggest that such a force typically arises from the adoption of a set of shared values, or some kind of ethical code. Such a code of shared values provides a viable level of stability via “power fields” (in the words of Kurt Lewin).

“So far as effective values emerge, the character of richly joined, turbulent fields changes in a most striking fashion. The relevance of large classes of events … is given directly in the ethical code.” Thus “a field is created which is no longer richly joined and turbulent but simplified and relatively static. Such a transformation will be regressive, or constructively adaptive, according to how far the emergent values adequately represent the new environmental requirements.”

This set of concepts strikes me as one of those things that, once you’re aware of it, you start seeing everywhere. I don’t know, maybe it’s just me, but I enjoy having access to conceptual tools such as ‘causal textures’, ‘lawful connections’, and ‘values-based power fields’ to help understand and manage the forces of incoherence that our enterprises struggle with.

As I mentioned, I expect to refer back to this in my next post, which will focus on enterprise ecosystems. Happy trails, until then :-)

For an overview of these postings, see: https://www.linkedin.com/pulse/overview-postings-doug-mcdavid?published=u

Thanks for the digest, Doug!