Douglas Austrom and Carolyn Ordowich shared some reflections developed jointly with Bert Painter (Vancouver, BC) on some draft humanistic principles, the three Tavistock perspectives, and a meta-methodology with Systems Thinking Ontario.

Proponents of Socio-Technical Systems design refer back to the 1960s-1980s research of Fred Emery and Eric Trist of the Tavistock Institute. Calls to reinvent approaches to organization design for hyper-turbulent environments may be better viewed through the whole systems view of three perspective for sensemaking:

Those who live and work in a given social system should be given the voice and and choice in designing their system. Calvin Pava’s notion of deliberation design applies not only to non-linear knowledge work. It can serve as a meta-methodology for dialogic design of organizations, networks and ecosystems. The role of designers shifts from designing the social system itself, to co-designing the deliberations by which key stakeholders can dynamically design their own systems.

Carolyn Ordowich is founder and president of STS Associates, Inc., since 1976, first in Montreal and Toronto, and then in Princeton, New Jersey. Her career has included three greenfield state-of-the-art designs, including a long-running example of 36 years for Canadian General Electric Aviation in Bromont, Quebec. Her most recent work is focused on the co-creation of programs and services on digital platforms, with growers, their farm management and workers, increasing value at the farm and downstream into the supply chain with participating retailers.

While we have a history of colocated meeting in Toronto, this session was one in the Systems Thinking Ontario series featuring speakers in our extended community. 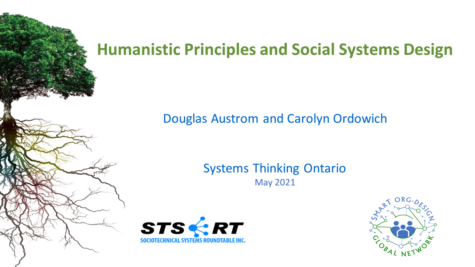