Positioning “A Pattern Language” more like “Creating Order of”, then “The Timeless Way of Building” more like “Negotiating Order with”, was a productive framing to discuss the systems theory inside Christopher Alexander’s thinking (as well as positioning “The Nature of Order“).

The purpose of a workshop on “Negotiating Order with Generative Pattern Language” at PLoP 2017 was to open up discussions that could deepen the foundational understanding in linkages between pattern language and systems thinking. At least three of us routed to Vancouver BC for a Monday morning start, in a quick trip from the Purplsoc meeting in Austria that finished on Saturday.  The PLoP program emphasizing writers’ workshops meant that our 90-minute dialogue didn’t conflict with any presentations.

On the audio recording, active participants in the sensemaking included Helene Finidori and Christian Kohls.  With a more relaxed pace, the open time after the slides were completed allowed some pattern language novices to also have questions answered. 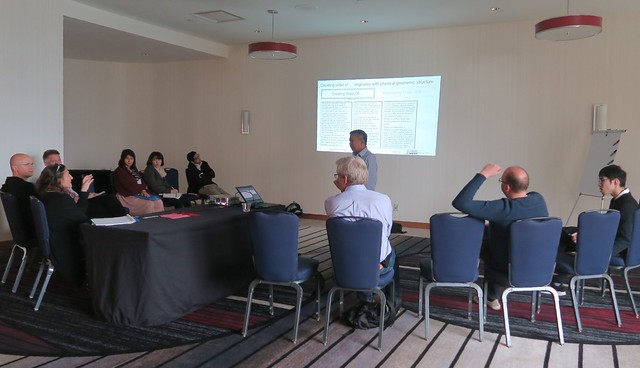 The frame for discussion was slides that had previously been posted on the Coevolving Commons.

The digital audio recording has been matched up with slides, for a less ambiguous viewing as a web video.

For observers who prefer to be mobile, video files can be downloaded directly on a device.

The downloadable audio recording includes the conversation of all participants.

There’s some richness in the conversation. A digest with some timecodes may help a listener to jump to a key point.

[28:40 Negotiated Order With … HF] Timeless Way of Building and A Pattern Language, one as the theory and the other as the practice, conveying the same thing?

[43m30 on Six General Elements … HF]: General systems and the pursuits of isomorphies (working across all types of systems, biology, ecology, etc.).

[45m30 on A Straw Man … Cognitive Elements … CK] :  Timeless way of building tells you how to do it, patterns tell you how they worked before (for a master)

[56ms20 on A Straw Man … Reality Tests … CK]:  Testing the theory, versus testing the design (the process)

[1h06h00: on A Straw Man …  Domain of Inquiry]: Negotiating with is more like creating a pattern language with the clients

Checking understanding:  Alexander uses “A Pattern Language”, and then “The Timeless Way of Building”?

1h35:30 HF:  Coming to pattern language, and thinking it’s one thing, and grasp some things

One of the findings from the workshop was that participants had not yet read Christopher Alexander’s 2012 book, The Battle for the Life and Beauty of the Earth: A Struggle Between Two World-Systems, that I have recommended as the best publication to start. Alexander documented as a scientist, and thus captured his position at each point in time, leading to changes in vocabulary. Workshop attendees agreed that the Alexander’s final publication could be used a the last word on his thinking, and said they might prepare for next year’s meeting by reading it.

For the proceedings, a formal revision of the outline was written as a reflection piece, summarizing the richer audio recordings available digitally.