It’s been six months since I last wrote about revisiting RSS reader choices. I decided to do a little housekeeping on my computer, and ended up switching to Feedreader.

I’ve been using GreatNews as my RSS reader, but have been disappointed that multi-selection is still not available. This means that a lot of articles have been building up, and I have to delete them one-by-one.

As I was posting an entry to a forum using Thunderbird, it occurred to me that Thunderbird actually supports RSS feeds, too. It works a lot differently from GreatNews (and RSS Bandit) though.

However, Thunderbird reads the link, and then loads the original web page in one step. This is clearly an improvement in productivity. However, for password-protected feeds, Thunderbird won’t manager the logins.

After looking over the alternatives again, I’m now moving to Feedreader. Although I didn’t originally like the simpler look of the user interface, Feedreader does allow me to delete batches of entries (i.e. shift-select). In addition, I discovered that there’s an “open an article link automatically” option, that produces the same result as the Thunderbird feel. This reduces the effort to one click. 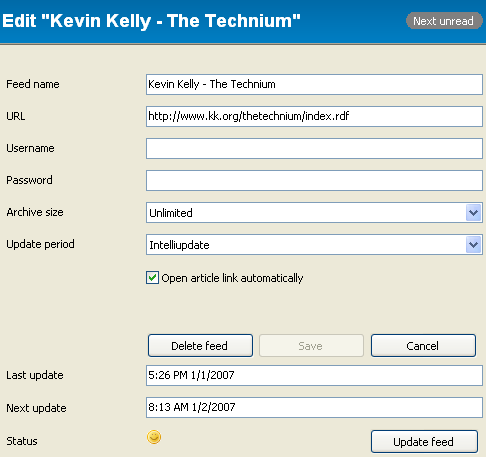 Finally, in comparison to the other products, there been a few more releases over the past few months, so the product continues to evolve.

Fortunately, all of these products now support import and export of OPML, so I don’t have to re-enter all of the feeds by hand. Yes. there’s some amount of customization involved, but I’m now have hundreds of feeds … so less work is better.