What might a non-anthropocentric view of sustainability look like?  This would probably include regeneration of species alongside others in the ecosystem.  With some recent presentations, an idea that resonates with audiences is the “The Second Life of Trees”, credited by Tim Ingold (2002) to John Knight (1998).  Ingold sees continuity of life not only of each species, but in the co-respondences of species alongside each over many lifelines.

As background, Gilberto Gallopin (2003) is helpful in describing what sustainability might NOT be about.  Firstly, an extreme anthropocentric position.

Sustainability of the human system only. This position, if taken to the extreme, could result in the Earth becoming a totally artificialized planet if total substitutability of natural resources and services were possible. The classical economicist view, for instance, regards the economy as the relevant system, and relegates nature to the role of provider of natural resources and services and of a sink for the wastes produced by human activities (Figure 3).

Then, there’s an extreme biocentric position.

Sustainability of the ecological system primarily, even if it means elimination or displacement of the human component (Figure 4).

Those who would value ecological sustainability above and beyond, rather than equal or subordinate to, economic and social sustainability represent an extreme “deep green” position in opposition to the anthropocentric one. This perspective is consistent with the concept of “very strong sustainability”.

The very strong sustainability position asserts that natural resources cannot be substituted by human-made capital; they cannot be depleted, therefore, without an irreversible loss in social welfare. Very strong sustainability favors a more fundamentalist mode of ecological solidarity with the Earth and all forms of life. This view is most compatible with a steady-state economy. Here, the preservation of the environment — a biocentric viewpoint — is the ethical precondition for sustainability. Pursuing ecological sustainability by way of diminishing social and economic concerns, even to the point of excluding humans or increasing human poverty, is not acceptable for the majority of us. 13

Gallopin proposes sustainability of a socio-ecological system as a whole.

Sounds good. But then what would “interlinkages between and society and nature” really mean?  I had previously written a digest about 2016/09/10 Tim Ingold, “The Sustainability of Everything” (web video) where John Knight is mentioned about 35 minutes in.

This was later formally published by Tim Ingold as a chapter in 2022.

In a study of upland forestry in Japan, anthropologist John Knight (1998) offers a cautionary tale of what can go wrong if the axis of development takes precedence over the axis of continuity.

Traditionally, Japanese foresters would look after trees for a generation, and then cut them for use as house timbers. In the house, the timbers enjoy what the foresters call a second life. In this phase the direction of care is reversed. For where foresters had nurtured trees in their first life, it is now the trees that nurture the foresters and their families in the second, by furnishing the warmth, shelter, and comfort of the dwelling. During this time, the foresters are looking after a new generation of growing trees, which will eventually, in their turn, become replacement house timbers. And so it would continue, generation after generation.

Here, the lives of foresters and their trees go along together, responding to one another in a cycle of mutual care that, in principle, can continue indefinitely. But today, as Knight shows, the cycle has been broken. Conservationists demand that old trees be preserved and not cut. These arboreal veterans are hence denied their second life. And the people, left without timbers to replace old ones as they rot, have taken to building their houses out of concrete instead. Development, here, has trumped continuity. [pp. 330-331, editorial paragraphing added]

This story leads to a richer read of John Knight’s writing.  For a taste, here’s the introduction.

Trees have long been important to human livelihoods in the mountain villages of the Kii Peninsula.

Regenerative timber forestry has come to occupy a central place in the economy of upland Japan. However, the trees in the forest have never been simply an economic resource for the people in the village. To the trees are attached a rich set of ideas, beliefs and associations. They are a site of spirits and a source of supernatural assistance, as well as a symbolic medium for human lives . [p. 197, editorial paragraphing added]

Evidence for the symbolic importance of trees in Japan is to be found, in the first instance, in a great deal of Japanese folkloric data, often applying to particular tree stands or tree species. But the modern timber plantations too, I shall argue, are an important medium through which many contemporary Japanese mountain villagers represent and understand their own lives. In the wake of the accelerated economic modernisation of upland Japan in the postwar period, a central feature of which has been the replacement of the earlier botanical diversity of the mountains by a coniferous uniformity, mountain villagers continue to associate their lives with the lives of trees. This occurs most prominently through family forestry, directed at growing timber to be used in the building industry. [p. 197-198]

In what follows, two relationships are taken up:

Ideas of tree-growth among foresters, sawmillers and carpenters are associated with a number of different social relationships including marriage, the continuity of the stem family and, related to this, ties between ancestors and descendants. While the long life-span of tree stands is one feature of trees put to use in this symbolic association, an even more pivotal feature is that of the continuity between trees and wood. Timber-growers raise trees with an eye to their eventual usage as building wood. If foresters often become emotionally attached to the trees they have grown for decades, they are normally mindful that the measure of their achievement is the wood quality of the trees, and that the value of the trees is something realised after they have been felled. [p. 198, editorial paragraphing added]

Sections in the chapter that are worth reading in the full include:

The continuity, overlap, and even identity between trees and wood forms the basis of the importance of timber forests to local families. The two phases of the life of ki — as tree and then as timberwood — are associated with the phases of dependency and then independent nurturance among family members in the context of the enduring house.

There is, therefore, a symbiosis (anthropocentrically defined) between human lives and the lives of trees. Human beings enable trees to grow straight and to live a second life as wooden houses. The trees both enrich their growers and shelter them. Family continuity is imagined in terms of the durability of wood. Wood is thus a medium through which people can imagine transcendence. [p. 214, editorial paragraphing added]

The skewed pattern of forest landholding has meant that the conversion of ancestral forests into family houses has never been generalised among upland dwellers, and tends to be something confined to larger landowners. Nonetheless, the ideal itself would seem to have an appeal beyond those actually able to realise it. It should also be stressed that even where plantation trees do not attain a second life as family timber — the inevitable fate, of course, of most plantation timber on an estate of any appreciable size — the trees may still be seen as contributing to the family, and therefore as having a second life through the continuing family line, the descendants themselves and the worldly success they achieve. [pp. 214-215]

Yet this is an age of heirlessness. Most rural families find themselves without an heir to continue the family line.

In this respect the forest trees recall the village parents whose children have left for the city, and who are therefore redundant as parents. They have been rejected by those they should be parenting.

The condition of upland Japan today is a morbid one, made up as it is of mountain villages of ‘dead’, displaced families surrounded by conifer forests of once loved but now forgotten trees. [p. 215, editorial paragraphing added]

Those who enjoy these excerpts may look into the writings of Tim Ingold and John Knight in full! 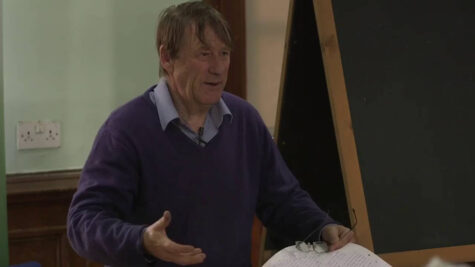