Over in Finland, Gary Metcalf has just started teaching a systems thinking class in the Creative Sustainability program at Aalto University.  Speaking with him yesterday, he described a situation similar to that which I experienced last year:  graduate students intrigued by systems ideas, yet slightly overwhelmed with the shift in perspective; and an appreciation that an intensive class taught over eight days is a lot of territory to cover.  The scheduling of two courses — one in the fall, and one in the spring — fortunately allows some time for intuitions to naturally develop in reflection, between the two weeks of formal classes.  Learning is not a linear activity.

Students — who take these systems thinking courses as a requirement, not an elective — may wonder how these courses came to be.  I served as content creator for two new courses on systems thinking at Aalto University in October 2010 and in February 2011.  The ISSS Hull 2011 meeting provided me with an opportunity to summarize the context and thinking that went into developing the two systems thinking courses de novo for Aalto University.  This article — “Systems Thinking Courses in the Master’s Programme on Creative Sustainability at Aalto University: Reflections on Design and Delivery of the 2010-2011 Sessions” — is available on the Coevolving Commons, and published in the Proceedings of the 55th Annual Meeting of the ISSS.  At ISSS Hull 2011, the outline was presented as a map. 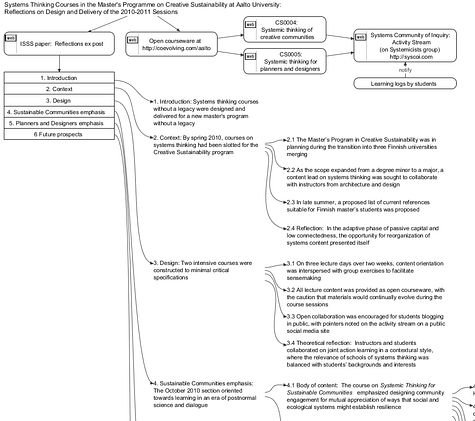 Some people will be interested in the course content per se.  The artifacts for CS0004 in October 2010 and CS0005 in February 2011 continue to be available as open courseware accessible over the Internet.  (Gary has now taken responsibility to evolve that content).  As I wrote descriptions about the course journey, the article itself surfaced systemic perspectives.  In order to describe CS0004 (in section 4) and CS0005 (in section 5), the preconditions of the context (in section 2) and an implicit design approach (in section 3) came to the fore.  The five sections of the resulting article are:

In writing the paper as an act of reflective practice, I came to appreciate my predisposition towards action learning in the tradition of Eric Trist more sharply.  I came to this knowledge through many years of discussions with David L. Hawk since 1998.  While I now live in Toronto, I unfortunately just missed the early 1980s period when Eric Trist was at the Action Learning Resources Group at York University, contemporaneously with Rafael Ramirez, Gareth Morgan and David Morley.

I see the students starting up their learning with postings on the Systems Community of Inquiry.  My curiosity on their progress is leading me to engage in the shared thinking, at a distance.

David Ing, “Systems Thinking Courses in the Master’s Programme on Creative Sustainability at Aalto University: Reflections on Design and Delivery of the 2010-2011 Sessions”, Proceedings of the 55th Annual Meeting of the International Society for the Systems Sciences, Hull, UK, July 17-22 2011.  http://coevolving.com/commons/201107-systems-thinking-creative-sustainability