A meeting of systems scientists and systems engineers together as the Systems Science Working Group at the INCOSE International Workshop 2014 provided a forum for “a proposal for collaboration on a pattern language for service systems (science, management, engineering and design)”.  The title is deliberately long, and required some hours to unpack the content in the slide deck. 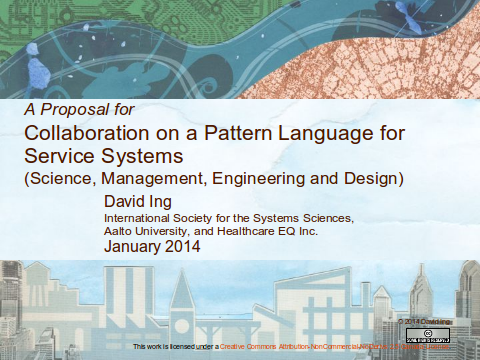 The initiative has been presented as ambitious.  Writing a (good) pattern language is non-trivial.  The originator of the pattern language, Christopher Alexander, published his first work in 1968, and then spent 9 years in collaboration until the 1977 release of the landmark A Pattern Language: Towns, Building, Construction.  In a 2010 interview, Alexander was asked about his perception on similar efforts.

[Rob Hoskins]: What’s been your opinion of subsequent peoples’ attempts at doing Pattern Languages – I’ve seen a couple of different ones, have you seen many?

[Christopher Alexander]:  Some. They’re not that good. The reason I say that is that the people who’ve attempted to work with Pattern Languages, think about them, but are not conscious of the role of morphological elegance in the unfolding. In a biological case, they always are elegant and the unfolding morphology is a sort of magic. But it’s very simple.  It’s not as if it’s magic because it’s complicated, it’s just … like that.

[Christopher Alexander]:   I think it is yes. The business of going from the large to the small was more for convenience….you could make sense of the book most easily like that but it isn’t necessarily the way to actually do it.

While contributors to this project can learn from prior art in pattern languages, there’s some basic contexts to be understood and appreciated.

Service systems are described in the context of the 2008 report on “Succeeding through service innovation” by the Cambridge IfM and IBM.  The science, management, engineering and design perspectives are from the 2009 Spohrer and Kwan article on”Service Science, Management, Engineering, and Design (SSMED): An Emerging Discipline — Outline & References”, with ten basic concepts underlying a service systems worldview.

The working of a pattern language is described with extract of the 1977 book A Pattern Language, with 127 INITIMACY GRADIENT.  The history of the Hillside Group, with a software (design) pattern (definition) illustrates application in a domain other than the built environment.  The variety of forms of writing patterns has been described by Martin Fowler.  Ties between pattern language and systems thinking are drawn by James O. Coplien and Neil Harrison 2004 and by Werner Ulrich 2006.  Christopher Alexander’s “Quality without a Name” is described in Richard P. Gabriel 1996.  Addition domains with ongoing work with pattern languages are evident in Scrum, in group facilitation processes, and in communications in the public sphere.

Service systems science represents a relatively new domain.  Seven conditions from this new perspective are presented as starting points for consideration in the development of a new pattern language.

The original Portland Pattern Repository on the C2 web site was created as the first-ever wiki by Ward Cunningham.  A breakthrough technology in 1995, wiki content could be criticized as representing too much of an inductive-consensual inquiring system.  Inquiry is an activity which produces knowledge, says West Churchman.  Tim Brown describes design thinking with both divergent and convergent steps, and an interplay between analysis and synthesis.  New technologies could encourage alternative interactions that reflect multiple perspectives.  Some new technologies worth exploring include federated wiki (by Ward Cunningham starting in 2012), Google Wave derivatives such as Kune and Rizzoma, and real-time collaborative editors such as Etherpad Lite.

E. Next steps for the proposal

The primary purpose of this proposal was to introduce individuals who were not familiar these contexts on service systems, pattern language and collaboration.  To move forward, five questions will have to be answered:

To get to a more concrete proposal, some of the new technologies can be tested in a sandbox, to assess the appropriateness for creating a new pattern language.  Cecilia Haskins, who had previously introduced the systems engineering community to pattern languages, suggests that collaborative reviews of pattern writers together can be improved with shepherding.

Organizationally, this initial proposal has been endorsed as worthwhile and promising by the Systems Science Working Group composed of INCOSE and ISSS leaders.  Workshops are being proposed on June 28, leading up to the INCOSE International Symposium 2014 in Las Vegas; and sometime between July 27 and August 1 at the 58th Annual Meeting of the International Society for the Systems Sciences in Washington, DC.  Members from other organizations are also encouraged to consider joining the collaboration.

[See the presentation on “A Proposal for Collaboration on a Pattern Language for Service Systems (Science, Management, Engineering and Design)” on the Coevolving Commons]