Dear Microsoft: After a 4-year separation with Windows 7, the constructive divorce that you’ve set for Windows 10 on July 29, 2016 will come into force.  I’ve just spent 30 hours trying to make things work.  I know that Lenovo says that the Windows 10 upgrade should work, but we’re spending so little time together that I don’t have energy to keep fighting.

We never really got married.  There was a time that I was spending up to 12 hours per day with you.  Our relationship has a long history:

Over the past few days, the messages you’ve been giving me have been more than frustrating. 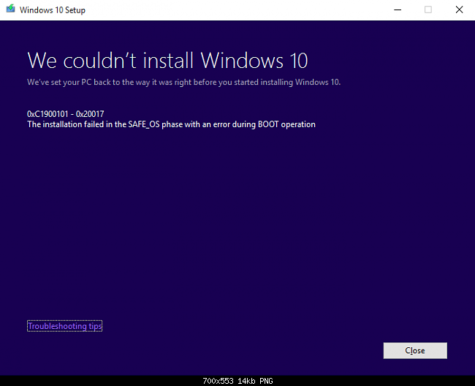 The BIOS is up to date and antivirus was removed.  I tried with both the automated installation and Media Creation Tool on USB, both with and without the online updates.  There were also long “Checking for update” delays, where I had to intervene.

Trying on the Thinkpad X230 Tablet, you told me “Something happened”.  “Sorry, we have having trouble determining if your PC can run Windows 10”.  This computer is on the “Lenovo supported systems list for Windows 10 Upgrade“, so is the trouble my fault or your fault? 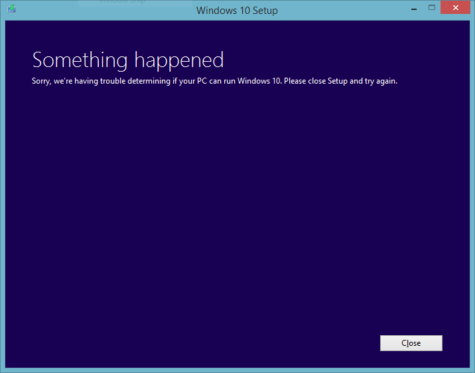 You led me to the Windows Update Troubleshooter, which found that the “Service Registration is missing or corrupt”.  The automated install didn’t fix everything, so I spent 15 minutes copying-and-pasting commands manually into a terminal window.  Thanks, that fixed the Service Registration problem. However the “Something happened” message is unchanged.

I’m not new to intense relationships.  I have to admit to not being fully committed to Microsoft for some decades.

From 1985, I was a mainframe computer guy (VM/CMS).  By 1986, the PC revolution led to connecting to IBM VNET through PC-DOS 3.3. In 1988, I got a taste of the future as one of the first working with Metaphor Computer Systems, predating the PowerPC Macintosh computers from Apple.  I bought into the Taligent vision from 1992 (around the same time that NeXTSTEP was being developed).

The demise of OS/2 by 1996 led IBM to internally adopt Windows 95.  From there, the rise of Windows XP in 2001 led to automated installations through the ISSI (IBM Standard Software Installer).  Like most people in the world, I became a user of Microsoft Office 97, XP and 2000.  I didn’t have to worry about the operating system, because there was a central help desk supporting 30,000 employees on the same platform.

With Windows XP ending sales in 2008, I hedged my bets by easing over to open software platforms.  With IBM offering an Open Client for Linux, I could configure an option to switch back and forth between Windows XP and Red Hat Enterprise Linux on a dual-booting computer.  By 2010, the introduction of the Ubuntu 10.04 Lucid Lynx release to the Open Client for Debian Community opened up some more choices for user interfaces, so I continued to run on a dual-boot Thinkpad.  When many in the company moved over to Windows 7 in late 2011 and early 2012, I was slow to change my ways.

In our house, our family had OS/2 desktop computers, and evolved to living with Windows XP.  We even had a series of Apple PowerPC towers running OS/X for a while.  My sons had Thinkpads for their study years in China, running Windows XP, Windows Vista and Windows 7.  When Windows XP stopped updating on our old computers, switching the family over to Ubuntu Linux gave the old hardware new life.

It wasn’t until 2012 that I decided that I should own my own laptop.  I bought a refurbished Thinkpad X200 for its portability, and followed the unofficial upgrade guides to maximize its power.  It was licensed for Windows 7, and I added Ubuntu 12.04 Precise Pangolin on dual boot.  I discovered that I would work in Ubuntu Linux for weeks without restarting in Windows 7.  The upgrade to Ubuntu 14.04 Trusty Tahr was rather uneventful.  Along the way, the Nexus 10 tablet and Nexus 5 smartphone running on the Android operating system — based on Linux kernel — would become more important to me than Windows.

At the end of 2013, I also bought a Thinkpad X230 Tablet, with a faster processor and pen-based interface, upgraded with more RAM and a mSATA SSD.  This became a dual-booting Windows 7 and Ubuntu system that I mirrored with the X200, so that if the hardware or software ever fails on one, I should be able to continue work on the other.  It’s only in early 2016 that I made the X230 Tablet my primary computer, and the X200 the secondary.

In 2015, I helped my friend DLH in Iowa with failing Windows 8 restarts on a Thinkpad T430, repurposing his T420 with Ubuntu Linux.  In diagnosing issues on the T430, I noticed the UEFI Secure Boot protection coupled with the Windows Certification Program.  Microsoft, you’ve found a way to increase your control over the computer, but Lenovo has done us a favour by allowing me to turn it off.  My friend DLH is happy with Ubuntu Linux, and recommends it to others as an alternative who don’t want the Windows 10 upgrade.

Earlier this year, I helped another friend, SN in Finland, with Ubuntu Linux as an alternative to Windows 10 on her Thinkpad X230 Tablet.  While in China, she had a similar lockup issue with Windows 10, and has vowed to not risk that again.

Microsoft, do I really need Windows 10?  The upgrade is free until July 29.  If I could have installed it in an hour or two, I would have upgraded.  After 30 hours, however, the continuing our relationship would require me to back up all of my data, reformat the drive, reinstall Windows 7, upgrade to Windows 10, reinstall Ubuntu Linux and then restore all of the data.  That’s a lot of work.  I’ve been doing fine with our separation since 2012.  The open relationship since 2008 gave me the confidence that I (and others) don’t have to follow the path you’ve determined for us.  In late summer, after Ubuntu 16.04.1 Xenial Xerus is released, I can use the one-button install to upgrade there.

What’s the risk of breaking up?  Sure, it’s probable that some malware will creep onto Windows 7 that you’ll fix on Windows 10 but won’t backport.  Since I’m not seeing Windows 7 much these days, anyway, I can just read the newspaper headlines and not worry about that.

Maybe others will go for the divorce, too.  If they’ve gotten used to the Windows 7 interface, maybe they would like the Cinnamon interface on Linux Mint, instead.