One of the aims of the Systems Changes research program is to build on the pattern language approach.  This body of work stretches back into the 1960s, and has been cross-appropriated from built environments to software development (e.g. agile methods) and organizational change.  The February 2019 meeting of Systems Thinking Ontario was an opportunity to bring some people not familiar with the territory up to speed.

Here is the abstract for the talk:

The 1977 book, A Pattern Language: Towns, Buildings, Construction is prominent in public library collections around the world. It represents, however, only one stage of the many works by Christopher Alexander, from his first book published in 1964, to his final book released in 2012. In addition multiple international conferences continue his legacy, in architecture and urban design (PUARL, for 10 years), in software development (PLoP, for 25 years), and in social change (PURPLSOC, for 5 years). Alexander was a builder of environment structure — an architect — and other communities have aspired to adopt the approach that he championed.

At U.C. Berkeley in the 1960s, Christopher Alexander, Horst Rittel and C. West Churchman could have had lunch together.  While disciplinary thinking might lead novices to focus only on each of pattern language, wicked problems and the systems approach, there are ties (as well as domain-specific distinctions) between the schools.

West Churchman joined Berkeley in 1957, and initiated master’s and doctoral programs in operations research at the School of Business Administration.   From 1964 to 1970, Churchman was associate director and research philosopher at UC Berkeley’s Space Sciences Laboratory, directing its social sciences program.  After his retirement in 1981, Churchman taught in the Peace and Conflict Studies program for 13 years.

Horst Rittel came to the Berkeley College of Environmental Design in 1963, the same year that dean William Wurster recruited Christopher Alexander.  In 1973, Rittel split his time between Berkeley and the architecture faculty at the University of Stuttgart, where he founded the Institut für Grundlagen der Planung.

Christopher Alexander became a cofounder of the Center for Environmental Structure at Berkeley in 1967, gradually moving outside of the university by 2000.

The tie between Churchman and Rittel are well-documented, in a 1967 article in Management Science. 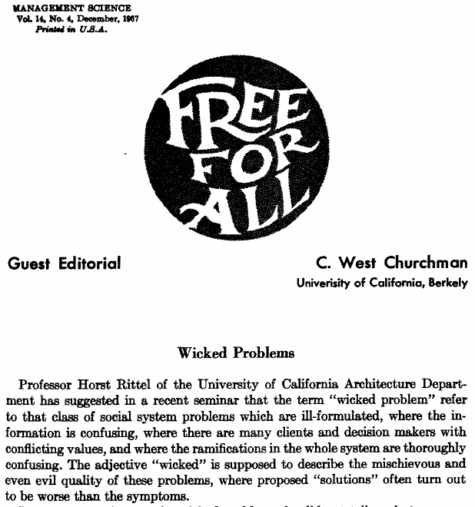 Professor Horst Rittel of the University of California Architecture Department has suggested in a recent seminar that the term “wicked problem” refer to that class of social system problems which are ill-formulated, where the information is confusing, where there are many clients and decision makers with conflicting values, and where the ramifications in the whole system are thoroughly confusing. The adjective “wicked” is supposed the describe the mischievous and even evil quality of these problems, where proposed “solutions” often turn out to be worse than the symptoms. [p. B-141]  Read more... (2548 words, 2 images, estimated 10:12 mins reading time)

The systems thinking roots from architect Christopher Alexander aren’t completely obvious in his work on pattern language.  A republished version of an 1968 article resurfaces some clarification on a perspective on systems thinking originating from practices in architecture.  This article introduced ways in which systems thinking could be most directly applied to built environments.  The cross-appropriation of pattern languages across a variety of domain types — object-oriented programmers were the earliest motivating adopters — could be enlightened by revisiting the foundations.  Alexander concisely presented 4 points, and then provided detailed reasoning for each:

2. A system as a whole is not an object but a way of looking at an object. It focuses on some holistic property which can only be understood as a product of interaction among parts.

3. A generating system is not a view of a single thing. It is a kit of parts, with rules  about the way these parts may be combined.

In a properly functioning building, the building and the people in it together form a whole: a social, human whole. The building systems which have so far been created do not in this sense generate wholes at all.  [Alexander 2011, p. 58; Alexander 1968, p. 605]

Let’s leave analytical explications of the original 1968 text as secondary, to first appreciate the idea of “systems generating systems” through sensemaking done some decades after 1968, and in the broader context of Alexander’s other writings and interviews.

Amongst the lovers and haters of Christopher Alexander is a predisposition towards interaction compatible with systems thinking.  For built environments, architecture can be described through a language of patterns, where those patterns may or may not be generative.  In her 2014 dissertation, Steenson fleshes out Alexander’s 1968 “Systems Generating Systems” with the broader context of the 1979 The Timeless Way of Building, and 1983 publication by Stephen Grabow of interviews with Alexander.

Alexander describes pattern languages as “generative,” referring to the quality of multiplicity, of a system that operates both as a whole and as a set of rules.  A system, like a language, works on multiple levels.  The system presents itself on the surface, he writes, when “we are confronted with an object which displays some kind of behaviour which can only be understood as a product of interaction among parts within the object.  We call this kind of behaviour, holistic behaviour.”262 It also incorporates the rule set for the manipulation of the elements that it composes. This dualistic system is analogous to the functions of the pattern language. Just as a generating system is a kit of parts, “Each pattern is a rule which describes what you have to do to generate the entity which it defines.”263 [Steenson 2014, pp. 90-91]

Following the workshop at 2019 CANSEE Conference, cohosted with David L. Hawk, we were invited to contribute an article to a special issue of WEI Magazine.  Here’s the abstract for the workshop in May:

This dialogue-oriented workshop will be framed by two short position papers (< 30 minutes each) towards energizing a discussion on the prospects for systems thinking and ecological economics.

(2) Environmental Deterioration: What have we learned about systems change(s) over the past 50 years?

Since the 1960s, nations have enacted regulations towards environment issues, sustainability of resources and stewardship of the environment: USA EPA (1969); Canadian EPA (1988/1999); EU Treaty of Maastricht (1993). Yet in 2009, the Stockholm Resilience Centre declared that human activity has exceeded two thresholds of nine planetary boundaries. Is it too late for the human race to act, or even to try? The 1979 Ph.D. dissertation on “Regulation of Environmental Deterioration” from the University of Pennsylvania will be considered retrospectively.

In an open group discussion, in what ways might a shift from “systems thinking” towards “systems changes” make a difference (or not)?

At the conference, we had a relaxed and wide-ranging conversation

In synthesizing some appreciation of the discussion from that workshop, we decided that I would take the lead on trying to capture some of the ideas.  Final revisions were accepted in October, and magazine production was completed by December. Here’s a rendering of the preprint.  Read more... (2936 words, 1 image, estimated 11:45 mins reading time)

Ecology and Economy: Systems Changes Ahead?

From the mid-1990s to the mid-2000s, methods for organizing for service engagements at scale were developed at IBM. Although this investment in knowledge management was huge, changes in the organization by the late-2000s saw this rich body of intellectual capital practically disappear.  Appreciation for the framework remains in the memories of practitioners in the IBM Global Services organization — particularly the methodologists — immersed during that period. Some foundational historical artifacts can be rediscovered on the open Internet:

The resemblance to pattern language, as prescribed by Christoper Alexander, is not accidental. Excerpts from these three sources are provided here, to entice readers who might seek out the full articles.

The Work Product based methods started in IBM at the rise of object-oriented methods. With OO as a new paradigm, incompatibilities across the variety of approaches frustrated clients trying to get work done.  The end results seemed pretty much the same. The resolution for IBM came through centering on ends (work products) first, and means (techniques) second. The methods originating in software development became cross-appropriated into services engagement for other domain offerings (e.g. business strategy, organizational change).  Read more... (2556 words, 7 images, estimated 10:13 mins reading time)

In what ways might the generation of wholeness through pattern language be strengthened, through an appreciation of advances in the systems sciences?  A workshop at the 2018 International PUARL Conference was an opportunity to review linkages and discuss some details.

An outline to frame the conversation was written in three parts.

In full, the abstract read:

Does a pattern language generate into (a) whole(s)? This workshop will discuss the meaning of architecting a system, complemented with recent research from the systems sciences.

In 1967, at the formation for Center for Environmental Structure, Pattern Manual specified that (sub)systems are fewer in number (and implicitly larger) than patterns:  Read more... (571 words, 1 image, estimated 2:17 mins reading time)