One of the aims of the Systems Changes research program is to build on the pattern language approach.  This body of work stretches back into the 1960s, and has been cross-appropriated from built environments to software development (e.g. agile methods) and organizational change.  The February 2019 meeting of Systems Thinking Ontario was an opportunity to bring some people not familiar with the territory up to speed.

Here is the abstract for the talk:

The 1977 book, A Pattern Language: Towns, Buildings, Construction is prominent in public library collections around the world. It represents, however, only one stage of the many works by Christopher Alexander, from his first book published in 1964, to his final book released in 2012. In addition multiple international conferences continue his legacy, in architecture and urban design (PUARL, for 10 years), in software development (PLoP, for 25 years), and in social change (PURPLSOC, for 5 years). Alexander was a builder of environment structure — an architect — and other communities have aspired to adopt the approach that he championed.

The pursuit of “systems generating systems” at the foundation of Christopher Alexander’s pattern language has generally not been appreciated, and deserves a deeper inquiry.

Noticeable by their absence are the books A Pattern Language (1977), and The Timeless Way of Building (1979), that are the most frequently cited works.  With the domain primarily not built environments, and instead other systems domains, the Eishin School and Multi-Service Centers projects reveal more about methods-in-practice.

Digital audio of the presentation and discussion has been synchronized with slides previously posted on Coevolving Commons.

For listening on-the-go, a downloadable audio file is provided.  In the case it’s hard to hear on a mobile device, there’s also a digitally boosted volume version.

The video is available as downloadable, for disconnected devices.

The title reflects that we have much we can learning from the legacy of Christopher Alexander.  The challenge and opportunity is building on that work, recognizing its strengths, and acknowledging the contexts beyond build environments where new value may be uncovered. 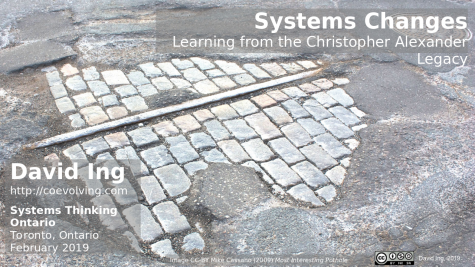