I, like many other Torontonians, went on a Jane’s Walk yesterday, an annual event honouring the legacy and ideas of Jane Jacobs.  DY and I joined the Regent Park Revitalized walk, scheduled for 2 hours in length.  With tour leaders from Toronto Community Housing (the legacy property owner), The Daniels Corporation (the developer leading the public-private partnership), and volunteers from the Regent Park community, we spent over 3 hours immersed in experiencing the transition-in-progress of a 28 hectare (69-acre) neighbourhood. 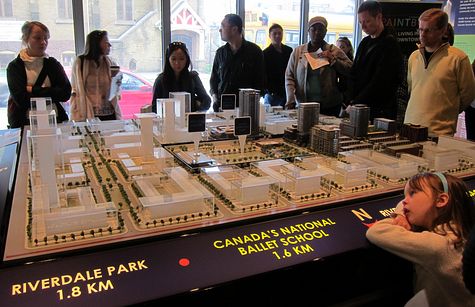 Catching up my reading, I was intrigued by “Jane Jacobs: Honoured in the breach“, an article by Stephen Wickens in the Saturday Globe and Mail.  Jane Jacobs had contacted him in 2005 to acknowledge some fact-finding on the right track, elaborating that “lot sizes and building heights often matter less to density than the land used for driving and parking”.  This people-centered view of city life was typical of Jacobs.  Wickens writes:

While her ideas are cited continually in discussions of urban affairs, their realization is arguably as far off as ever – in part because her followers are finding there are no shortcuts through her complex system of thought. […]

She had no time for ideology – left, right or whatever – and felt that many who invoke her name “cherry-pick ideas to suit their purposes.”

I was fortunate to meet Jacobs in a session of the ISSS 2000 meeting in Toronto (and was invited to her house for wine and cheese, afterwards).  She was truly a systems thinker, with a system of ideas and view on problematiques (systems of problems) that is both commonsense and complex.

On the Globe and Mail web site is a video clip of Harvard economist Edward Glaeser saying that Jane Jacobs got it wrong.

Harvard economist Edward Glaeser, author of last year’s Triumph of the City, says [Jacob’s] central idea that “cities are what real people make of them,” not buildings and infrastructure, “has, by and large, gotten through in the planning community.”

But Mr. Glaeser also argues that for the environment and the economy, urban density must get vertical: “She was too afraid of new buildings, too afraid of height and high density.”

His comments have sparked debate. In a speech in Toronto, New York-based critic Roberta Brandes Gratz called his criticisms an “outrage.” And [John] Sewell says he “has so misinterpreted Jane’s beliefs on density and tall buildings, it’s stunning.”  […]

Ms. Jacobs, however, felt that gentrification issues proved her right about which areas work: “Until the car became a factor, we built primarily for pedestrians,” she told me in 2004. “Those places are capable of self-regeneration.” Since then, however, costs in “unslummed” neighbourhoods have soared because “we stopped building places worth gentrifying, so demand far and increasingly outstrips supply.”

This idea of self-regeneration was is surfaced by Jane Jacobs in 2001 as self-refueling in Chapter 4 in The Nature of Economies.  Isomorphies between ecologies and economies might have been better developed if James Kay had been able to continue his research, as outlined in notes to an Environment and Resources course circa 2001.

Wickens refreshes our reading of Jacobs:

… page 150 [of The Death and Life of Great American Cities] … lists four conditions for any part of a city to generate “exuberant diversity”:

It was indispensable that these areas accommodate various levels of income and commercial rents.

But simply to list the factors without the examples and complicated dynamics found in the book is almost to miss the point.

“If you’ve read to the last chapter,” she told me, “you know cities – their parks, transportation planning, development policy, density ratios … are, like the life sciences, problems of organized complexity. It’s no good wishing it were any other way.”  [editorial paragraphing added]

Organized complexity is a central theme in the systems sciences.  It’s a background driver for my having developed new courses in Systemic Thinking for Sustainable Communities, and for Planners and Designers in the master’s program in Creative Sustainability at Aalto University in Finland.