In February, I returned to Finland to teach the Systemic Thinking for Planners and Designers CS0005 course in the master’s program in Creative Sustainability at Aalto University.  I had previously blogged about teaching and learning from the Systemic Thinking for Sustainable Communities CS0004 course in October.  The February course was again intensive, this time on a Friday-Tuesday-Friday schedule.

All of the course content is available as open source in a directory at http://coevolving.com/aalto/201102-cs0005/ .  Here’s a map outlining the course. 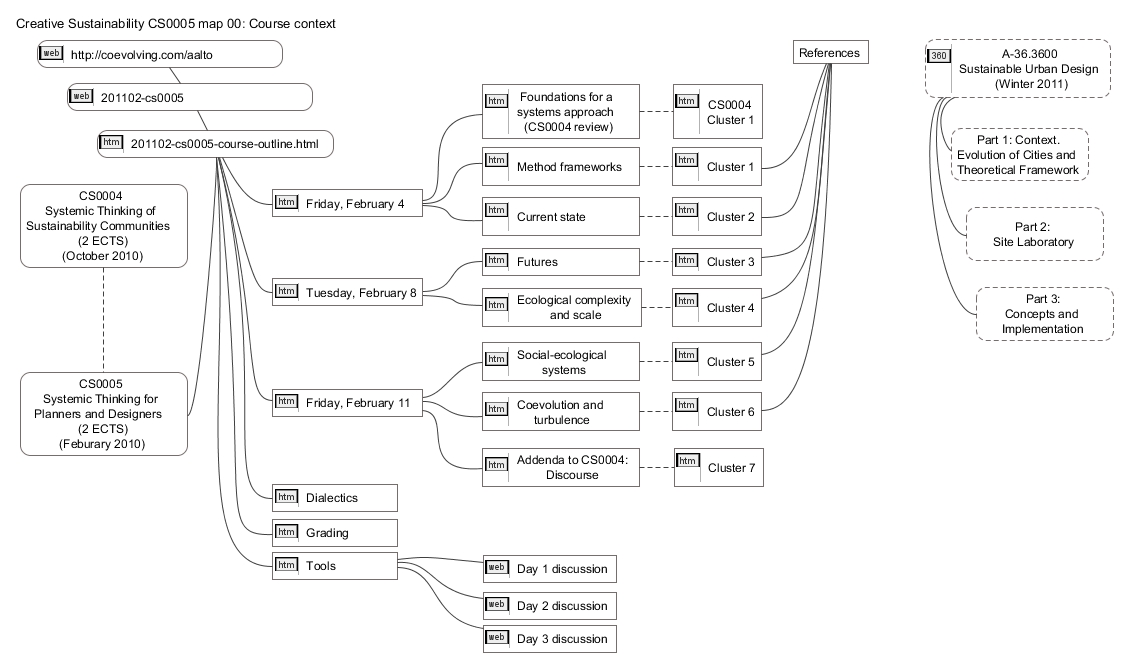 The style of the classes again centered on a list of references from which students could select according to personal interests, supplemented by lectures outlined with context maps.  The course outline was provided as long form text that evolved online during the week.  Written responses from students were most frequently posted on public blogs, with notifications and responses on the Systemicists Forum on the Systems Community of Inquiry, with separate threads for Day 1, Day 2, Day 3, and the final essays.

The first lecture for CS0005 was a quick review of the first topic for CS0004 in October, foundations for a systems approach.  This turned out to be a worthwhile activity, as the students (and my co-instructors!) had mulled over the basic ideas of systems for four months, resulting in more reflection and questions than I was expecting.

This background in the first lecture continued with a discussion of method frameworks. 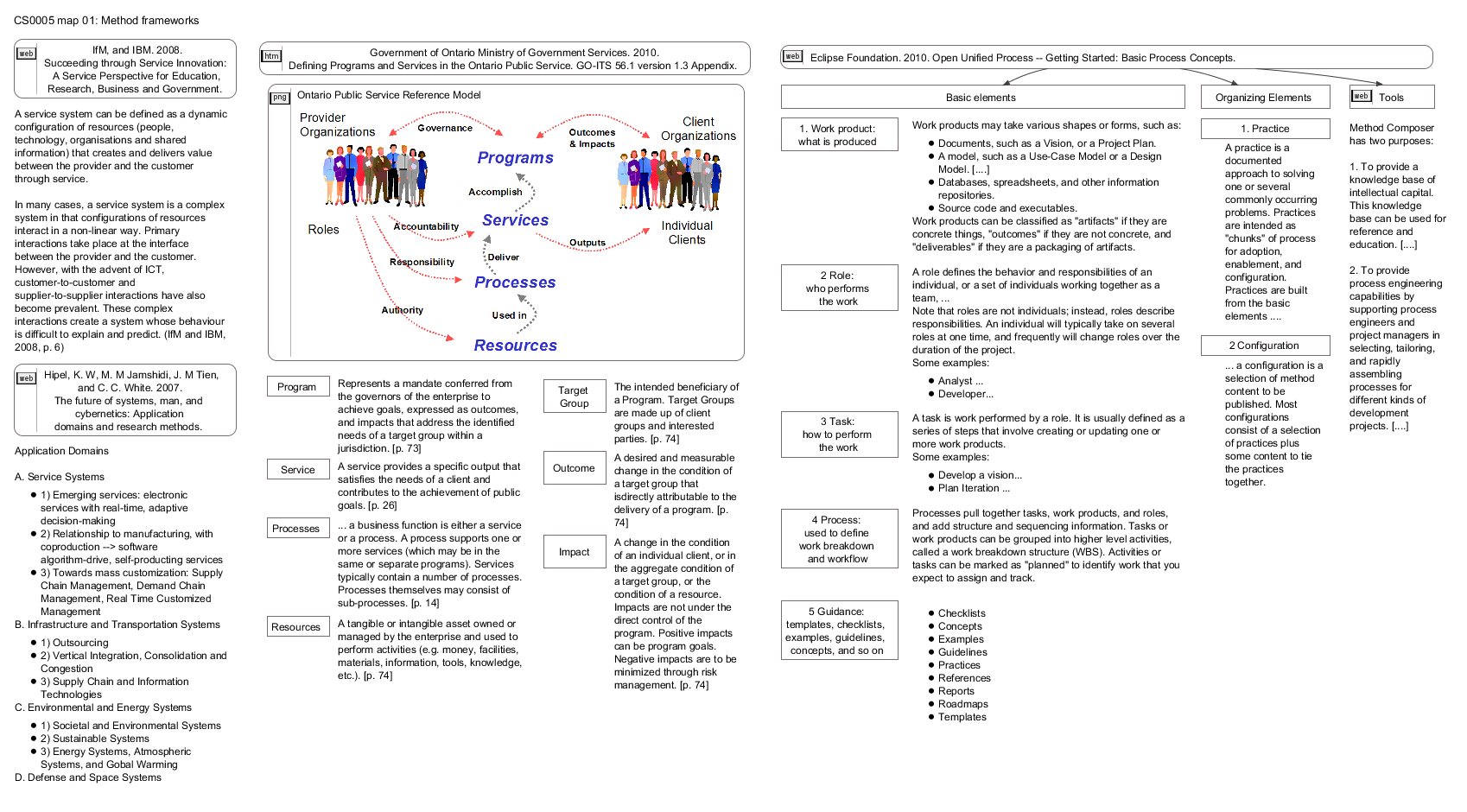 The distinctions between designing a system and designing a service system were discussed in the context of the Succeeding through Service Innovation report by the University of Cambridge and IBM.  As a concrete example of service definitions, the approach to Defining Programs and Services in the Province of Ontario was outlined as one set of vocabulary and concepts compatible with a systemic approach to public offerings.  As a more general framework to defining methods — as cooperative work, and potentially service design methods — the Open Unified Process from the Eclipse Foundation was outlined.

Since redesigning a system presumes starting from an existing context, the second lecture focused on appreciating the current state.  We stepped through the Soft Systems Methodology, as a summarization of the variety of readings pioneered by Peter Checkland in a social learning style with a 25-year-plus history.

Since human beings can shape their futures, the third lecture then focused on alternative futures that might be possible, through two approaches.  From Russell Ackoff, four orientations to planning (reactive, inactive, preactive and interactive) were discussed, leading to an introduction to formulating the mess and idealized design.  From Steve Haeckel, the premise and principles of the sense-and-respond organization were outlined.  Students were encouraged to access this body of work as readings. 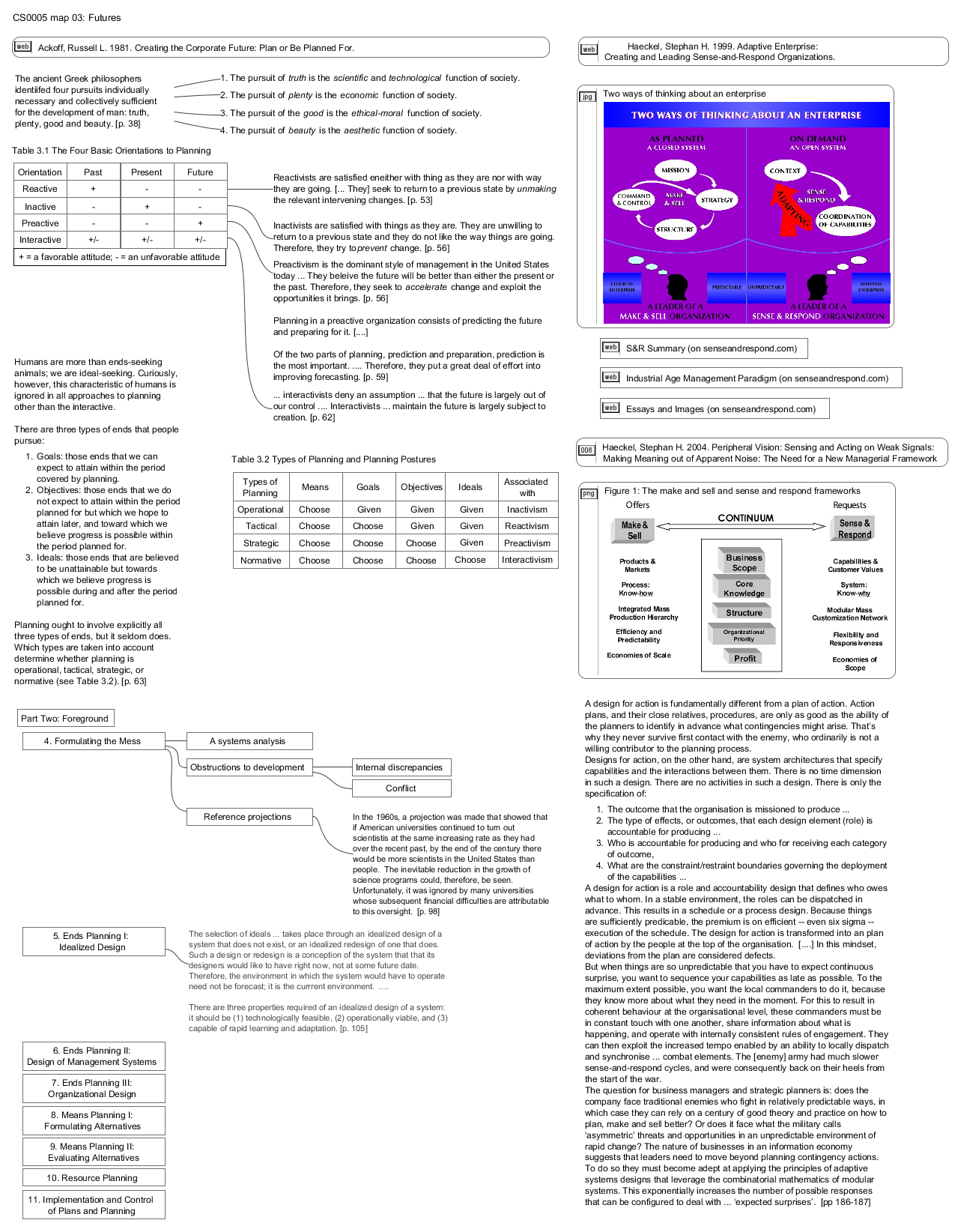 Since feasibility can play a large role in design, the fourth lecture discussed ecological complexity and scale, building on the research of  Timothy F.H. Allen. 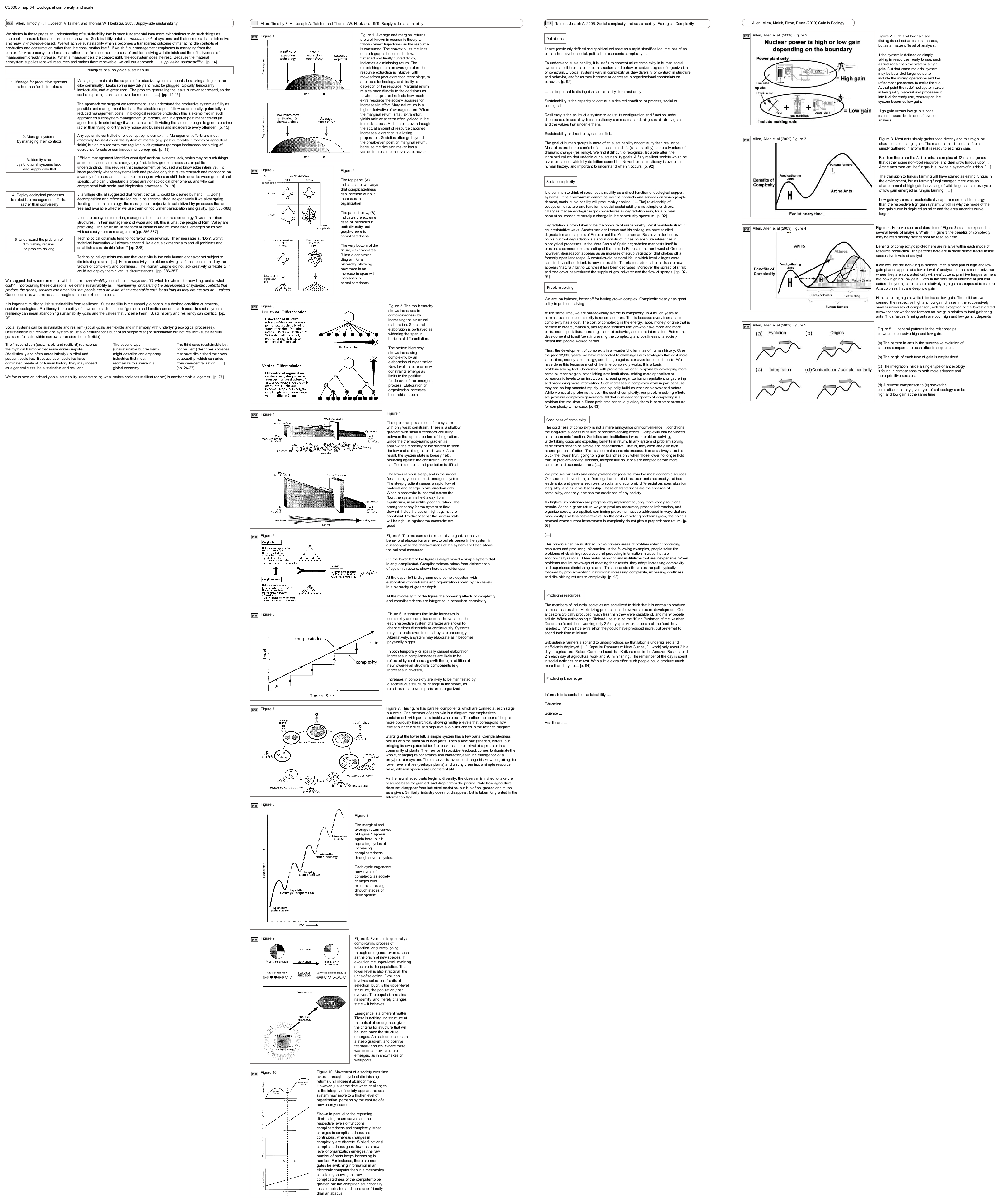 Students were encouraged to look into the online references for these ideas, particularly since we discovered that there isn’t a copy of the Supply Side Sustainability book in any library in Finland!  I advised that this work is science in progress, so students might not understand the ideas immediately, with the light turning on some time in the future.

Coming up to the current research (since 2006) amongst ecologists, the fifth lecture outlined Social-Ecological Systems. 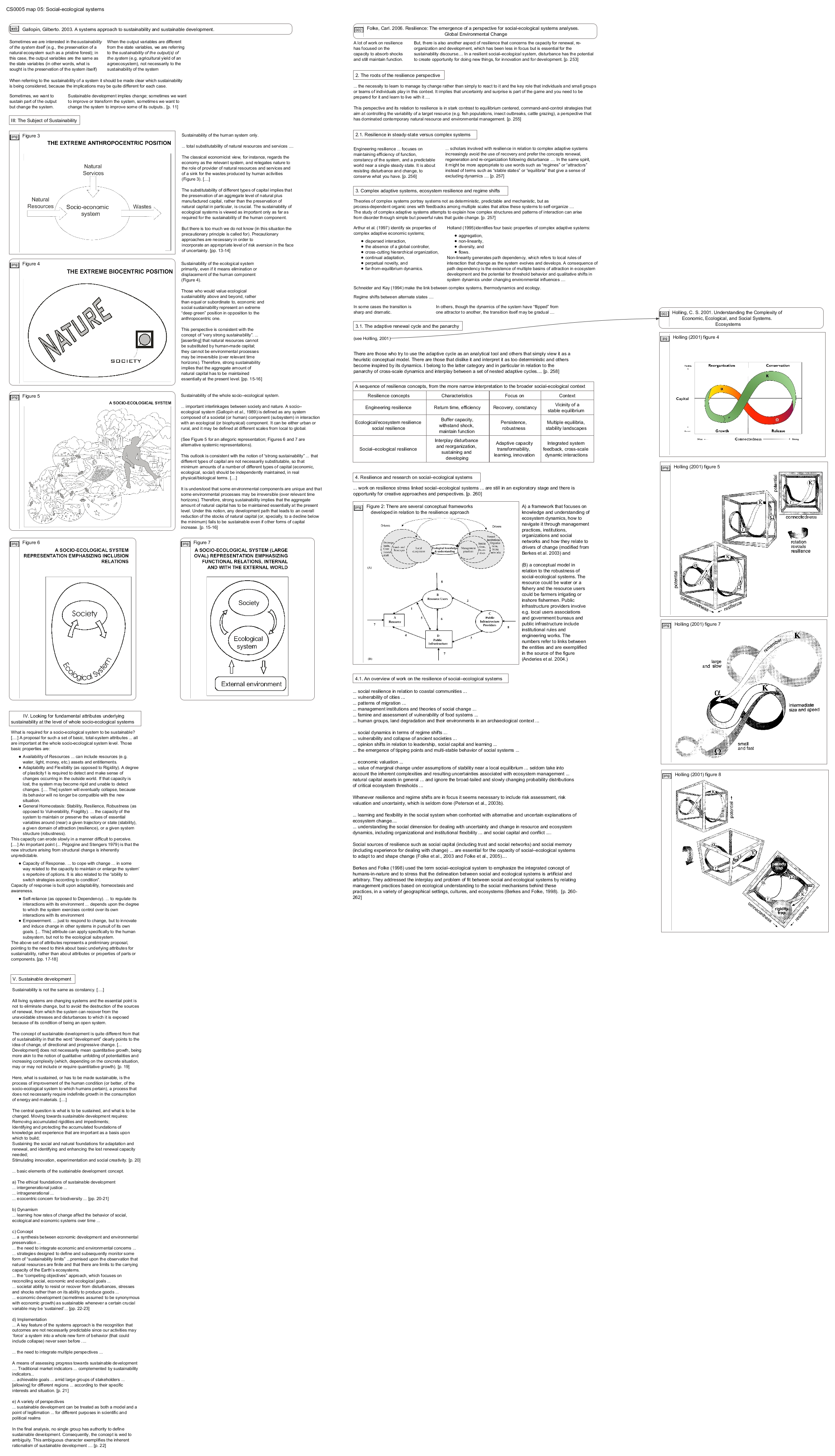 The students appreciated the distinctions between sustainability and sustainable development by Gilberto Gallopin, published by United Nations.  The ties between Social Ecological Systems and resilience thinking were surfaced.  I pointed out that the references on Social Ecological Systems are a relatively young (i.e. post-2006), and that I hoped to learn more at the Resilience 2011 meeting in March.

The sixth lecture worked through the basic ideas of coevolution in two species interactions as described by Eugene Odum, and responses to turbulent environments from Emery & Trist.  The current thinking in coevolutionary ecological economics, based on Richard Norgaard’s development betrayed thesis, was outlined.  The list of references bridged some older and new research that might not otherwise be linked naturally. 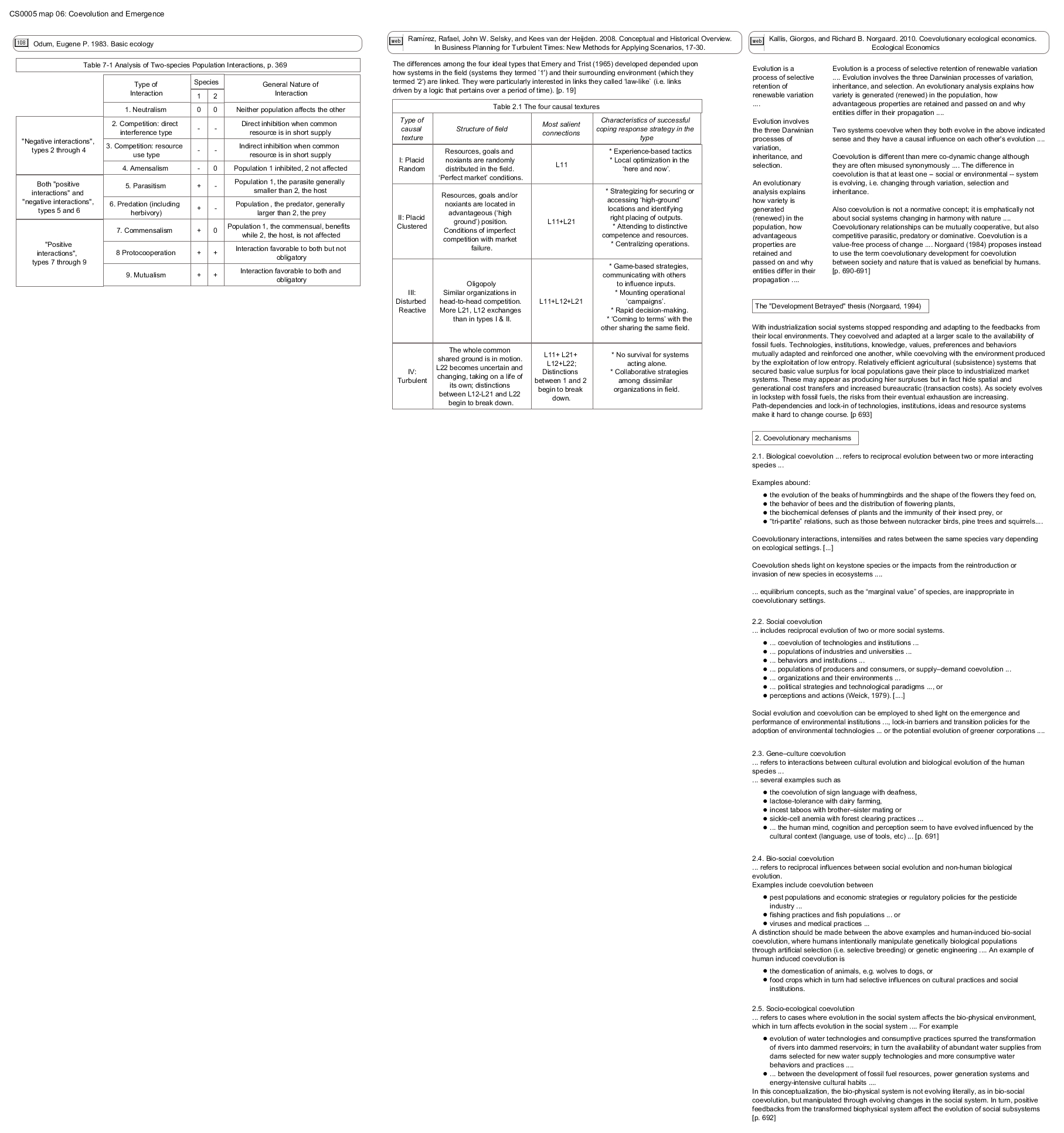 As a remedial lecture to CS0004 (i.e. amendments to content in October that students would have found helpful), I offered an additional lecture that most of the students voluntarily attended.  The seventh lecture on discourses included conversations for action as described by Flores and Winograd; dialogue in the sense of William Isaacs and Bela H. Banathy, six conversation from Peter Block, and seven elements of negotiation from Roger Fisher. 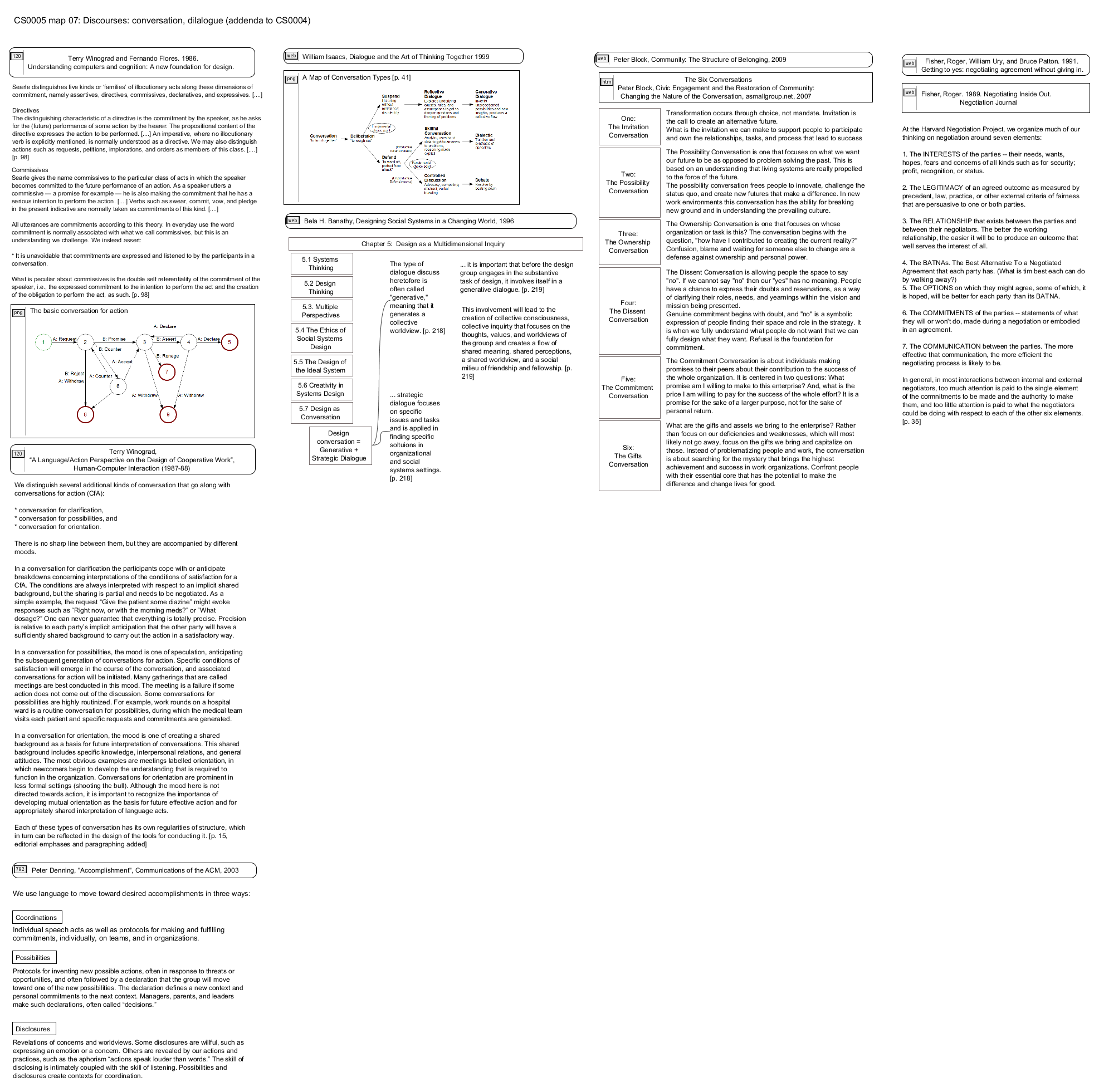 Throughout the class, we again organized students into two polar cells that would come together as a group in a dialectic.  Since many students were working on a sustainable design concept in a parallel course, we had hoped that they might use that case study in the CS0005 course to increase relevance of the content.  In practice, the timing of the intensive CS0005 course was off, so there may be some considerations for scheduling in future years.

As much as I had been impressed by the progress of the students in October, I was even more impressed in February.  By the end of the lectures on the second day, I had remarked that the students had internalized the content on systems thinking to such depth that they would be comfortable attending a systems sciences meeting.  I encouraged them to contribute papers to the ISSS 2011 meeting at Hull, UK.