The PUARL subgroup is led by former students of Christopher Alexander from the Center for Environmental Structure at Berkeley in the 1970s. They continue to work on “towns, buildings and construction”, with recent interests in large scale incidents (e.g. tsunami preparation and recovery) and human geography (e.g. refugees and migration).

The PLoP subgroup is steered by the Hillside Group that formed coincidentally with the release of 1994 Design Patterns (Gamma, Vlissides, Johnson, Helm) book. They have often colocated with ACM OOPSLA/SPLASH with collaborative sessions following writer’s workshop techniques, and have associated chapters around the world (e.g. EuroPLoP, AsianPLoP, ScrumPLoP).

The Purplsoc subgroup was founded in 2014 in Austria, and alternates conference years with PUARL. The emphasis on social change draws broad participation from practitioners in policy-setting and organizational change, bringing novices up the learning curve.

Pattern language was central to the IBM Global Services Method in the mid 1990s, practitioners tools (i.e. Open Unified Process and the Eclipse Process Framework Composer) and the Architects’ Workbench project at IBM Research Yorktown in the early 2000s. The organizational memory on these initiatives has mostly been lost to the millennial generation, and pattern language is typically a peripheral concept to students today in computer science programs at leading universities.

David Ing will give an introductory talk on the history and prospective directions for these ideas.

To listen on a disconnected device, downloadable audio is available, with volume digitally boosted as options.

My (long) time as an IBM employee positions me as a knowledge bridge between the the past and the present.  I joined towards the end of the John Akers regime, and was active during the Lou Gerstner and Sam Palmisano years.  I was fortunate for the collaboration amongst some great practitioners in business technology, who laid many of the foundations that we take for granted, today. 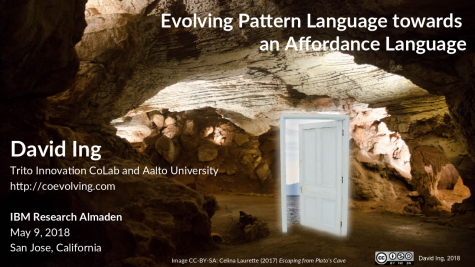