In Toronto — partially in response to members of the International Society for the Systems Sciences looking for sustainable alternatives to the pattern of annual meetings outside of North America every other year — we’ve started a Systems Sciences Meetup group.  There’s a rich history of people and events in the systems sciences in Toronto, and we’ve been remiss in keeping the momentum going.

The purpose of these meetups is to enable conversations amongst like-minded people interested in (continuing to) climb the learning curve on (the) systems science(s).  Having a keynote speaker provides a centre around which the conversations can coalesce.  In November 2009, Allenna Leonard led the first meetup with a talk on “What are the Systems Sciences”.  Given the holiday season, we deferred the next meeting to January.

With the announcement of a Memorial Celebration for Russell Ackoff in Philadelphia in February, it seemed natural to prepare a session for those unfamiliar with his life and work.  Thus, for the January 6 Systems Sciences Meetup, I’ll be leading a talk on “Russell Ackoff, abridged“.  Having satisfied a personal goal to create a single double-sided page of  highlights, I’ll be relying on two maps as visual aids.

Following a style prescribed by the master himself — not just examining the system, but also its environment — the professional timeline of Russell Ackoff includes his relationships with the Tavistock Institute for Human Relations (that included Fred Emery and Eric Trist), as well as C. West Churchman and Peter Drucker.  Ackoff became a professor emeritus in 1986, continuing his involvement with the systems community through research institutions honouring him, and conferences featuring him for keynotes.  Ackoff’s legacy in the systems sciences lives on through former students in the Social Systems Science (S3) program at the University of Pennsylvania (1975-1988).  A full-size view of this professional timeline is available as an interactive page with links. 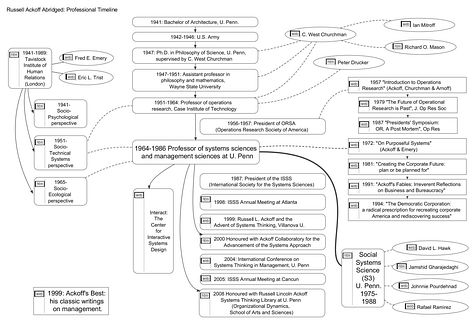 For a conceptual view of Russell Ackoff, a map of his writings selects from chapters collected in Ackoff’s Best (1999).  Five chapters from the first three parts of the book — systems, planning, and applications — give a feel for his system of ideas.  The full-size view of these selected writings is also available as an interactive page with links. 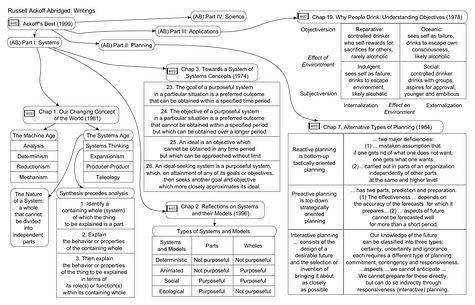 I am only an extended member of the S3 — known as S-cubed — program, never having studied at the University of Pennsylvania.  I had seen Russell Ackoff speak at the ISSS Atlanta 1998 meeting, and not knowing better, submitted and had a paper accepted to the 1999 Villanova conference in his honour.  My experience with Russell Ackoff is thus not through direct interaction, but instead through his social and intellectual network.

Readers who enjoy these reflections on leading system figures may look forward to an additional Systems Science Meetup on January 21, led by Jennifer Wilby from the Centre for Systems Studies at the University of Hull (on a fortuitous routing from the UK to California). Jennifer will be speaking on “Kenneth Boulding, abridged” — the first president of the Society for General Systems Research, an organization that evolved into ISSS.  Boulding was a renaissance man.  He was accused of not being an economist in the year that he was president of the American Economic Association!

The two interactive web pages linked above were creating using VUE — the Visual Understanding Environment, from Tufts University.  Readers interested in seeing how the above diagrams were created are welcomed to download the timeline and writings source files for VUE.