For a class on Service Science at the U. of Toronto iSchool Master of Information program,  Kelly Lyons granted me the luxury of 2 hours of time.  In a relatively small classroom, she asked me to enable more interaction with the students.  With an orientation more towards theory in service science, I decided to use the slides for “Service Systems Thinking: An Introduction” that I had presented earlier in the month in Finland, but to start in a different place.  Thus, the lecture began in part 6, with three topics:

This discussion opened with science as episteme, techne and phronesis.  The context of architectural programming as problem seeking opened up a conversation about what researchers and practitioners are doing with service science.  Towards concreteness in methods, the transition from structured methods to agile development was compared with action research.

Here are audio recordings of the lecture, in two parts.  (Video is so much more work!)

After the philosophical introduction, circling back to the beginning of the slide deck placed more emphasis on understanding the perspective of bringing systems thinking into service science.  We then rolled through content that has been (or will be covered) in the course, from a different orientation.

In the audio, there’s some banter back and forth with Kelly Lyons, who has been active in service science since its beginning.  While she paces students through content over a semester, I unfortunately only lecture occasionally at universities, so I cover a lot of ground.  Making digital recordings available is a favour for listeners who prefer to use a pause button to think and reflect. 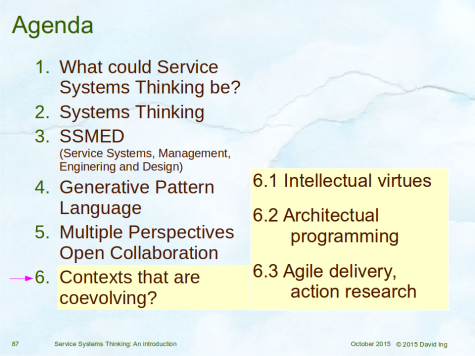