Christopher Alexander’s work described the architecting of built physical environments.  The 1977 book A Pattern Language bears the subtitle “Towns, Buildings, Construction”.  This approach was developed in the context of architectural programming and problem seeking originating the late 1960s.  It was complemented by methods described in The Oregon Experiment, and theory in The Timeless Way of Building.  Appreciating the philosophy embraced in the practice of building environment structure leads to a lot of reading.  The challenge has been made harder by Alexander continually evolving his vocabulary and definitions throughout his career to 2012, with his last publication of The Battle for Life and Beauty of the Earth.

Service Systems Science inquires into a world that is not necessarily physical.  Is it possible to remain relatively true to the pattern language approach developed by Christopher Alexander, and extend that into a new domain labelled Service Systems Thinking?

The 21st Conference on Pattern Languages of Programs — known as PLoP, organized by the Hillside Group at Allerton Park, Illinois for September 2014 — was an opportunity to test out the idea of Service Systems Thinking amongst practitioners who have grappled with applying pattern languages to software development for over 20 years.  My contribution of writing to the Narrow Road to the Deep North (奥の細道) writer’s workshop led by Richard P. Gabriel and Jenny Quillien turned out to stretch the normal process of critical review.  The accepted paper was incomplete, overwhelming in length (since workshops usually review submissions of just a few pages), cross-disciplinary in nature, and written at level beyond an undergraduate audience.  Since preceding presentations at other conferences had been workshop presentations of 3 to 5 hours in length, a written work turned out to be an ambitious effort for both the audience and the author.

PLoP conferences produce proceedings, where authors take the comments from the reviewers to revise the writings.  The timeline for completion was by January 2015.  In months between the Allerton meeting and the deadline, I managed to complete a coherent manuscript which was scheduled to be formally published by the ACM.  Self-publishing on the Internet is now easy, so it’s easy to distribute the author’s version of the work.

So, the manuscript for “From Environmental Structure to Service Systems Thinking: Wholeness with Centers Described with a Generative Pattern Language” has been available for some months.  At 32 pages (including a long list of references), this work comes with an apology.  If you would prefer the precision of reading, this article should be seen as a beginning, not an end.  If you’re not a fan of reading, perhaps watching some of videos might be less painful.

In the future, there should be better ways to collaborate on developing knowledge than writing long manuscripts.  (Ward Cunningham invented the WikiWikiWeb to support pattern language development, and had written up some Tips for Writing Pattern Languages back in 1994!)

Service systems, as a domain originating as recently as 2005, can benefit from a literature review of key ideas evolved by Alexander from 1964 through 2012. Service systems thinking has been proposed as a label that combines (i) systems thinking; (ii) the SSMED (Service Science, Management, Engineering and Design) vision; (iii) the generative pattern language theory underpinning Alexander’s life work; and (iv) multiple perspectives open collaboration enabled through contemporary collaborative Internet technologies such as federated wiki. This article focuses primarily on two of four parts, (ii) SSMED and (iii) generative pattern language. References on (i) systems thinking and (iv) federated wiki are separately available as complementary published papers and web video on the Internet.

With service systems thinking as a new area of research, a full of appreciation of Alexander’s thinking is an aspiration. Since service systems are interactive in a way that built environments may not be, generativity in a pattern language is desirable. In addition, a service system may aspire to produce wholeness, through the architecting of key centers. This article aims to serve as a boundary-spanning reference on which conversations for orientation can be founded.

See the article on the Coevolving Commons. 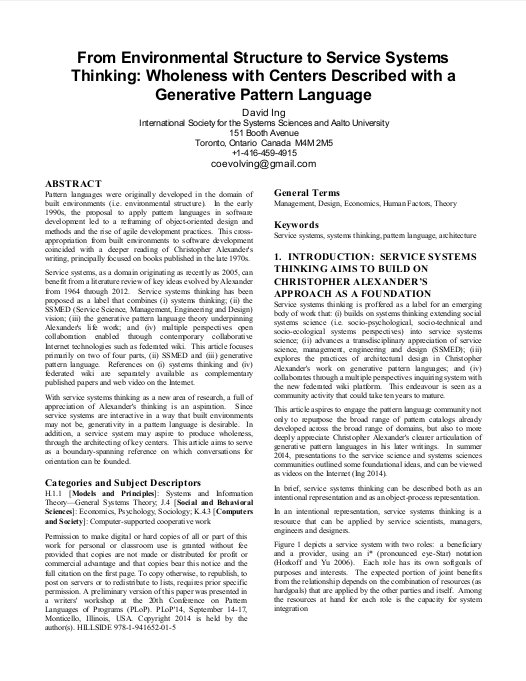