Covering practical wisdom (phronesis), the third of four lectures again was compressed for the Systemic Design course in the Master’s program in Strategic Foresight and Innovation at OCAD University. The students in the part-time session on February 7 extended their discussion period longer than those in the full-time session on February 5. I again jumped slides in the sequence to stay within the timebox.

The agenda was in four sections:

Copies of the video files are downloadable for disconnected viewing.

Readers who want to follow through on web link references may want to review the slides directly. 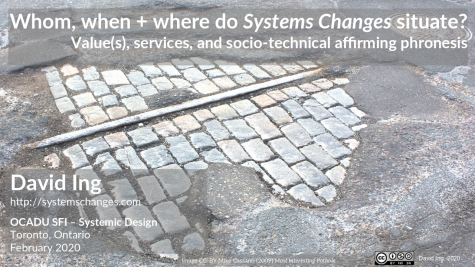 The same presentation slides were used for both lectures.  The questions from the students were considerably different across the class sections, so the diligent listener might want to compare them. … Read more (in a new tab)

With a focus on “ecological systems”, the second of four lectures planned for the Systemic Design course in the Master’s program in Strategic Foresight and Innovation at OCAD University proceeded as a timeboxed presentation:  targeting 40 minutes of content (skipping slides to stay within time constraints), followed by 10 minutes of discussion.  Since the slides are rich with content and links to sources, students were directed to pay attention to what I was saying, over trying to read the slides projected behind me.

The agenda was in four sections:

Online, the video is available on Youtube for streaming.

Viewers who prefer to watch video on a disconnected device can download a video file.

Readers who want to follow through on web link references may want to review the slides directly.… Read more (in a new tab)

Following the workshop at 2019 CANSEE Conference, cohosted with David L. Hawk, we were invited to contribute an article to a special issue of WEI Magazine.  Here’s the abstract for the workshop in May:

This dialogue-oriented workshop will be framed by two short position papers (< 30 minutes each) towards energizing a discussion on the prospects for systems thinking and ecological economics.

(2) Environmental Deterioration: What have we learned about systems change(s) over the past 50 years?

Since the 1960s, nations have enacted regulations towards environment issues, sustainability of resources and stewardship of the environment: USA EPA (1969); Canadian EPA (1988/1999); EU Treaty of Maastricht (1993). Yet in 2009, the Stockholm Resilience Centre declared that human activity has exceeded two thresholds of nine planetary boundaries. Is it too late for the human race to act, or even to try? The 1979 Ph.D. dissertation on “Regulation of Environmental Deterioration” from the University of Pennsylvania will be considered retrospectively.

In an open group discussion, in what ways might a shift from “systems thinking” towards “systems changes” make a difference (or not)?

The pre-reading of Emery (1967), “The Next Thirty Years: Concepts, Methods and Anticipations” was introduced as a challenging article for the second meeting of Systems Thinking Ontario on Feb. 21, 2013.  The theme for the evening was “Systems Thinking and Future Studies”, so there was some irony in looking backwards to 1967 to have a discussion on looking forward.

In my role as reviewer in Systems Thinking Ontario sessions, I would prefer to try to stick to the text rather than adding editorializing.  However, since this Emery (1967) article is particular rich, I tried to provide some additional context to make the reading easier.

Fred Emery is especially known for his work with the Tavistock Institute for Human Relations, as one of the pioneers of the field we know today as organization science, including organization development and organization design.  In 1967, systems thinking was new:  The Systems Approach would be published by West Churchman in 1968, and On Purposeful Systems by Ackoff and Emery would follow years later in 1972.  The Club of Rome was founded in 1968.  In this article, Emery was thinking about how systems thinking frames viewing the future. 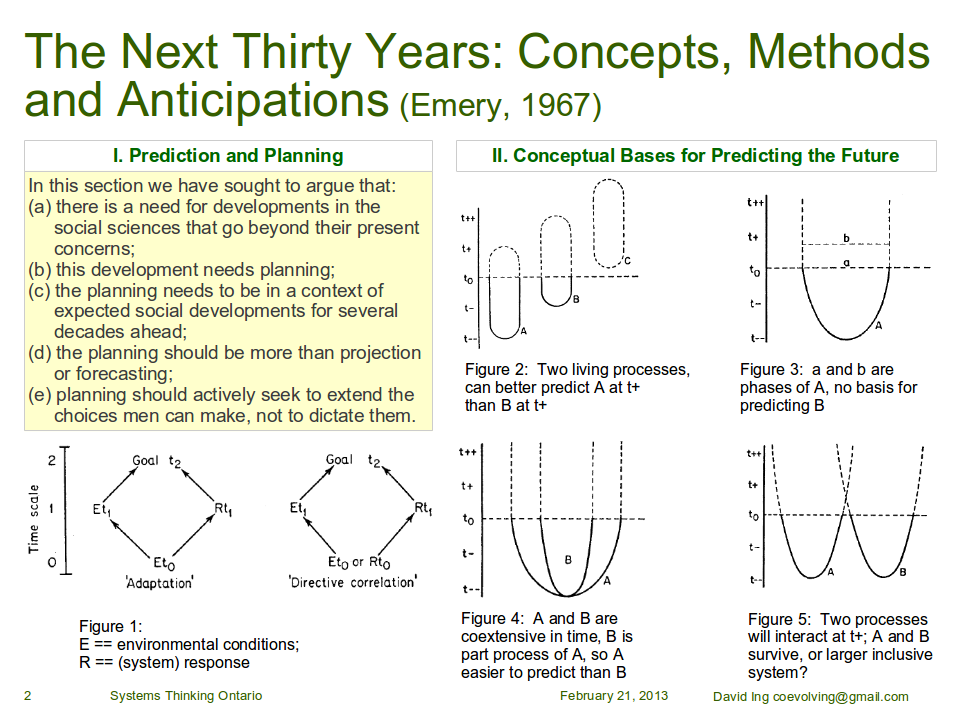 In I. Prediction and Planning, the systems of interest are in the social sciences.  The longer history of systems thinking prior to 1967 would have been a stronger cybernetics orientation.  The research from the Tavistock Institute on the socio-psychological, socio-technical and socio-ecological systems perspectives would have been fresh.  … Read more (in a new tab)

In the service management literature, a “theory of the offering” is an alternative to a “theory of the firm”. Leading up to the ISSS San Jose 2012 meeting, Rafael Ramirez asked if I was aware of a 1989 chapter on “A Theory of the Offering: Toward a Neo-Industrial Business Strategy” by Normann and Ramirez. I responded that no, I had not seen that. My understanding of offering comes from the 2006 Business Orchestration book by Johan Wallin, the 2000 Prime Movers book by Ramirez and Wallin, and the 1994 Designing Interactive Strategy book by Normann. These are rooted in an appreciation of distinctions between a cause-effect relation and a producer-product relation (of coproducers) from the 1972 On Purposeful Systems book by Ackoff, based on the 1959 Experience and Reflection book by Singer and Churchman.

I’ve always been a fan of the perspective of service systems taken by Normann and Ramirez, as the thinking is well-aligned with systems theory. This 1989 paper enlightened me on the context in which offering was first developed, that I missed in reading the later writings: