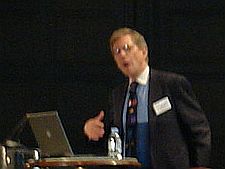 Iconic CEO, in a hotel in New Orleans:  where am I, and why am I here?

Theme of conference as thinking to win

It's a paradox in business

Make an economic case for thinking:

Ideas are capital, and everything else is just money

3. Black box knowledge:  can't tell it, but you can hire me

There are companies that don't think about this

Worry about Google:  don't need HBR, just need enough data to get through the day

Black box strategies:  advantage of high prices, but star players may get hit by a bus or raided

Should have this discussion openly

Knowledge assets create this type of value, and monetize

Assets: something that transform inputs

Need a process of identifying knowledge assets that are useful

Intellectual assets:  what do we sell that is unique and valuable?

Can think about 3 different types of restaurants

Each company has all of these types of assets, but they go to companies different ways

If I want to change my strategy, how do I change my intellectual capital?

How to get to the most valuable knowledge, and share it?

If returns to knowledge greater, than improbable romance between the suits and creatives

1. A company that wants to be a thinking company has to take off the suits, and allow people to be in your face

Open source.  Mozilla, and other companes that open up knowledge

Knowledge offshore is cheaper, how much to invest there?