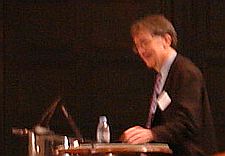 Five minds for the future is written as a policy-maker

Background as psychology and education

Can't just treat people traditional knowledges, finish at age 20 to 30, and then rest on laurels

What was the greatest invention of hte last 2000 years?

Basic argument for the disciplined mind

For each discipline, false

All of us are inundated by information

Psychology:  nothing on the topic of synthesizing

If want to synthesize, need to know what will happen at the end

Believe that there will be whole schools that will teach synthesis

Syntheses that don't work take in too much

Can't be creative unless have mastered a discipline

Creativity is judged by other people in the field

Two additional minds, wouldn't have written about them as a cognitive psychologist

Respectful mind: world is diverse, have contact with people around the world

Close, but no cigar:

Changing minds:  Have changed own mind on whether there should be penalties on where should allow scarves in France, and cartoons in Denmark

Want people to have all three E's, how do we engender this in young people?

Young people know good work, but a large number know that they can't be good workers when they're young

Role of education in nurturing these minds?

Changed mind:  was studying, in an amoral way

How to formulate to create a common standard on the five minds, particularly on respectful and ethical?

12-year old daughter being challenged on short-term memory, not on creativity

Can respective for others and ethical behaviour exist without self-respect

Consider the religious mind, and ethics?