Roger Martin has been dean for 9 years, and has renewed

[Dean and Premier’s Research Chair in Productivity and Competitiveness and Director, AIC Institute for Corporate Citizenship, Rotman School; Author, The Opposable Mind: How Successful Leaders Win Through Integrative Thinking (Harvard Business School Press, Fall 2007); The Responsibility Virus: How Control Freaks, Shrinking Violets – and the Rest of Us – Can Harness the Power of True Partnership(Basic Books, 2002); Co-Author, The Future of MBA – The MBA of the Future (working title for Oxford University Press, Fall 2007)] 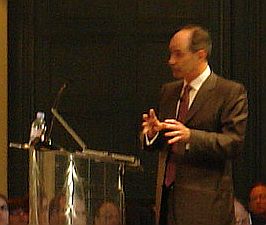 Will talk about integrating thinking

Clip:  John Sterman:  modeling process happening unconsciously, and you can't turn it off

Model clash leads to fundamental choice:  in the face of clashing models, fear and avoid

Alternative choice to seek out and leverage:

Rather than accepting one or the other, took parts of the both models

How do they do this, by what process of thinking?

It's not that people aren't decisive, it's to search for creative solutions to tensions

John Bachman, Edward Jones, second largest broker in the U.S., and one of the best places to think in the company

Non-linear thinking is a trait of Jack Welch, even though he portrays himself as straightfoward

Relationship between the nature of competition, and dreaming

Saw this, willing to compensate for more complicated relationship

Search for creative resolution of tensions

A.G. Laffee, getting more innovation at lower cost, rather than increasing cost

Take a bad trade-off, blame himself

Thus, innovation is from award from the audience, which is inclusive

How to become a more integrative thinker

Stance on existing models, they're constructions, not reality

Stance:  models are there to be opposed, not adhered

Different points of view are important

Believe job is to for individuals to find choices, not make choices

Know when have give selves time to find a solution

Conventional stance versus an Integrative Stance

When model runs into tensions, need to rethink it

Mindset, Canadians aren't the type to go forward without compromise?  Don't have a culture of innovation?

Strategy about making trade-offs and choices.  Compromise instead?  How to ensure not a sub-compromise.