[Greeting from Chris Hart, regional manager of the Four Seasons] 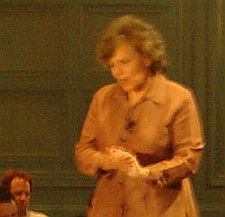 The costs and consequences of mindlessness

We learn things in a simple perspective, but then standing in a different place, it becomes something completely different

We learn, and then learn to be mindless

Roast beef, cutting off slice to put into another pan

Skid in car, impulse is to ease on brakes, but with anti-lock brakes, push firmly

When you're mindless, you're not there

Mindlessness coming from doing it over and over again

Work versus play, who decides?

Study of chambermaids, asked what exercise they get

e.g. cholesterol:  a measure 12 years ago

Look for familiar in the novel, the novel in the future

Look for universal versus personal attribution, e.g. it's different

Is mindfulness in the eye of the beholder, or on the canvas?

Symphony musicians trained to be mindful

How to become more mindful?

A mistake is a cue to be in the present

Absolutes:  keep off the grass

Recognizing the social construction of reality, rather than implicitly imputing ontological status, leads to control

When we're not mindfully creating, is there a way that we can enjoy more?

Children:  when we expect them to change, we notice more

Business calculations in a spreadsheet?